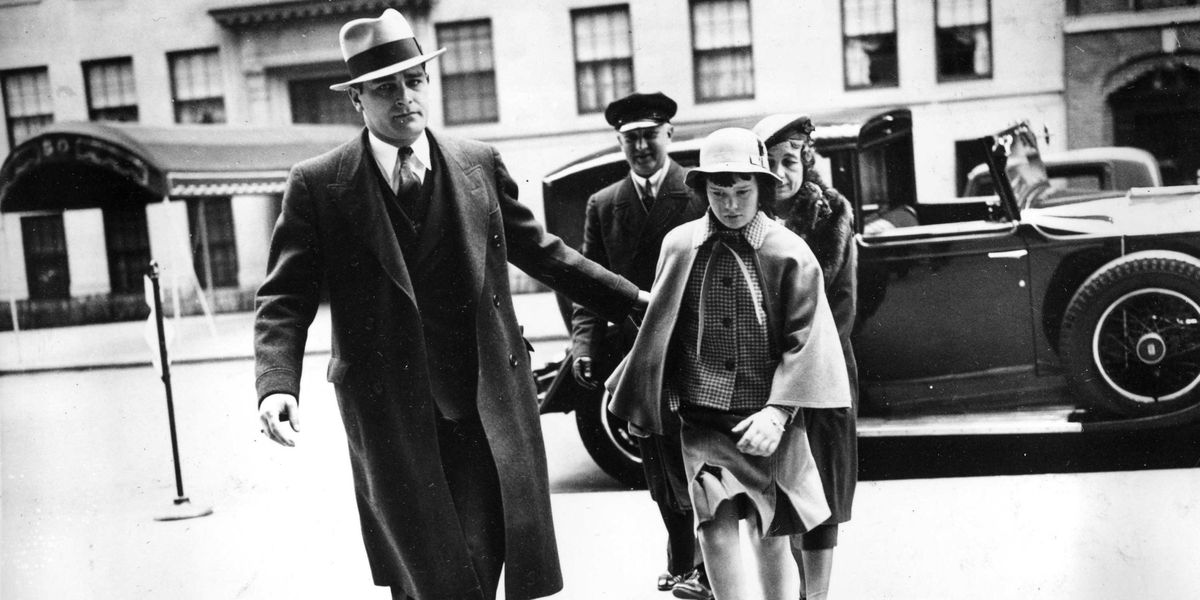 The gray Rolls Royce eased to a stop at the curb of 60 Centre Street in downtown Manhattan. Out stepped Gertrude Vanderbilt Whitney, thin and unsmiling. Dressed in a fox fur, hat, and gloves, the 59-year-old founder of the Whitney Museum, accompanied by her lawyer Frank Crocker, headed silently up the 32 steps leading to the Corinthian-columned Supreme Court of the State of New York. Every inch of the way, she was swarmed by nearly 100 jostling newspaper reporters and photographers.

October 1, 1934: the opening court date of The Matter of Vanderbilt. A family dispute over who should have guardianship of a shy and sickly 10-year-old heiress, Gloria Vanderbilt, had escalated into the “trial of the century.” The opposing parties were two sisters-in-law: Gertrude Whitney and the child’s 29-year-old mother, also named Gloria. The next six weeks would treat reporters to charges of maternal neglect, greed, and “immorality” that ranged from drinking cocktails till dawn to leafing through a book of pornography with a prince of Hohenlohe-Langenburg while wearing silk pajamas. And then there was the kissing and cuddling with female friends.

Gloria Vanderbilt and her aunt, Gertrude Vanderbilt-Whitney, arrive at a courthouse in New York for a trial to determine who would get custody of the girl.

The Vanderbilt case was an irresistible window into the lives of the ultra-rich for Depression-stricken America. Of all the principals involved in various trials of the century (and there have been many) no one was more horrified by the accompanying publicity than the deeply private Gertrude Vanderbilt Whitney. Her life was the 1934 equivalent of clickbait.

The Vanderbilts had long been a clan of extremes—parties, mansions, marriages—that made for great copy. Ten of the largest mansions on Fifth Avenue belonged to the family at one time or another. It’s no surprise, then, that the custody trial would fascinate a country in need of distraction—and continue to do so. It became the subject, in 1980, of a bestseller by Barbara Goldsmith, Little Gloria…Happy at Last, and a 1982 miniseries starring Bette Davis, Christopher Plummer, and Angela Lansbury. This past spring, the 84-year-old trial hit the airwaves again during promotion of a book and HBO documentary by Gloria Vanderbilt and her son, Anderson Cooper. Cooper called his mother’s trial “the O.J. case of its day, except bigger, because nothing like it had ever happened before.”

It was the O.J. case of its day, except bigger, because nothing like it had ever happened before.

Gloria’s story really begins with ruthless patriarch Cornelius “Commodore” Vanderbilt, a Staten Island farm boy turned railroad titan who died in 1877, leaving a fortune of $100 million—more than was held in the U.S. treasury at the time. Gertrude, his great-granddaughter, grew up in a family mansion on Fifth Avenue that stretched between 57th and 58th streets, now the home of Bergdorf Goodman. A sculptor and art patron, Gertrude used her family wealth and position to launch a museum devoted to American painters.

Gertrude’s younger brother, Reginald Claypoole Vanderbilt, made different kinds of life choices. On the night of his 21st birthday, he celebrated coming into his $15.5 million inheritance by losing $70,000 at the gambling table. His main interest was racehorses, his hobby drinking. By the time he was 42, his doctors were pleading with him to give up alcohol or else he’d be dead. He didn’t. Instead, Reggie married a 17-year-old society beauty, Gloria Morgan, who gave birth to their daughter, also named Gloria, before he died of cirrhosis of the liver in 1925.

Baby Gloria with her mother, Gloria Morgan Vanderbilt, shortly after the death of her father, Reginald Vanderbilt.

The reading of the will left widow Gloria reeling in shock. Reggie died broke—he’d blasted through his entire fortune and incurred huge debts besides. His daughter would inherit the monies of an inviolable family trust, half of $5 million, when she reached the age of 21. In the meantime, mother and child would have to live on interest payments.

In the 1920s the trust interest stretched far enough for the young widow to travel to Paris, London, Cannes, Hollywood, Monte Carlo, Biarritz, and Switzerland, moving in the same circles as her twin sister, Thelma Furness, mistress of Edward, Prince of Wales. Gloria Morgan Vanderbilt herself was briefly engaged to Gottfried, German prince of Hohenlohe-Langenburg, charming but destitute. Her closest friend was the adventurous Nadejda Mountbatten, marchioness of Milford Haven. Through the exhausting whirl of all-night parties, shopping, and beach holidays, little Gloria spent the vast majority of her time with her live-in nurse.

The nurse fumed over the scant time Gloria’s mother spent with her daughter. Back in America, lawyers and family members weren’t happy about the merry window either. Gertrude Whitney entered the picture when little Gloria got tonsillitis. Mother and daughter sailed to America for an operation. The little girl’s aunt invited her to recuperate from the tonsillectomy at her home on Long Island. A grateful Gloria Morgan Vanderbilt hurried back to Europe and didn’t see her child again for many months. Gertrude enrolled her niece in school; little Gloria’s health improved.

After her monthly allowance was sliced because, after all, she wasn’t living with her child, Gloria Morgan Vanderbilt returned to New York City. Fearing that she was about to be cut out of little Gloria’s life completely, she filed a court petition seeking official guardianship (she was under 21 when her daughter was born and her husband died). But Gertrude Whitney opposed it—Gloria Morgan Vanderbilt was an “unfit” mother.

When the headlines broke, 1934 was grimness itself. The national unemployment rate was 21 percent. One-third of New York City residents lived in tenement housing, and $1,745 was the average annual family income.

The grim irony was the little Gloria was not alone in being separated from her parents. According to testimony given before the Senate Committee in 1932, about 20,000 children in New York had been placed in institutions because impoverished parents could not provide for them. In 1934, more than 100 people in the city died of hunger. Now New Yorkers learned of the bitter battle over Gloria Vanderbilt, with one of the parties—Gertrude Whitney—labeled “the richest woman in the world.”

The reporters’ sympathies were sharply divided. Maury Paul, who wrote the hugely influential “Cholly Knickerbocker” column (he coined the terms “café society” and “Old Guard”) backed Gloria’s mother all the way. Others cranked out feverish stories decrying her lifestyle. Julia McCarthy of the Daily News wrote: “For five hours Mrs. Gloria Morgan Vanderbilt…listened to a tight-lipped nurse denounce her with virtual relish as a cocktail-crazed dancing mother, a devotee of sex erotica, and the mistress of a German prince…it was a blistering tale no skin lotion could soothe.”

Judge John F. Carew allowed reporters into the courtroom until the day that Gloria Morgan Vanderbilt’s French maid testified to her employer’s behavior. When asked if she ever saw anything “improper,” the maid answered, “Yes I remember one thing, it seems to me very funny.”

After being pressed, the maid said that, when bringing in some clothes, she saw “Mrs. Vanderbilt was in bed reading a paper, and there was Lady Milford Haven beside the bed with her arm around Mrs. Vanderbilt’s neck and kissing her just like a lover.” Lady Milford Haven, the daughter of a Russian grand duke, was married to a Mountbatten, cousin to the king of England.

There was a moment of complete silence, and then the room exploded in pandemonium. The alarmed judge cleared the press from the courtroom for good.

R.G. Belsky, a veteran of the New York Daily News, The New York Post, and NBC News, says that while people may assume that the media circuses that surround today’s celebrity scandals dwarf anything of the past, that isn’t necessarily the case. With no television or Internet, the newspapers of the 1930s ruled absolutely, and there were a dozen papers fighting for readers in New York City alone. “It could be much crazier than it is now,” he says.

“You had all of these papers scrapping to get a scoop,” says Belsky, author of Blonde Ice and other thrillers featuring reporters. “Anybody would do anything to get the story.”

After more than seven weeks of extensively reported testimony, Judge Carew ruled in favor of Gertrude Whitney. Little Gloria would live with her aunt; her mother could have weekend visitations. The New York Journal American composed the ditty: “Rockabye baby/Up on a writ/ Monday to Friday, Mother’s unfit/As the week ends she rises in virtue/Saturdays, Sundays, Mother won’t hurt you.”

“You had all of these papers scrapping to get a scoop. Anybody would do anything to get the story.”

It is not a legal solution likely today, says Ilysa Magnus, a Manhattan matrimonial and family lawyer. “I don’t see any judge giving an aunt custody.” The ruling was “extremely punitive” and reflects the 1930s, when domestic relations law was “extraordinarily socially conservative.”

Conservative courts notwithstanding, Judge Carew had found himself puzzling over an apparent contradiction in his courtroom: Did Gloria want to live with her aunt or with her mother? Attorneys for the little girl’s mother had produced teams of letters in which the 10-year-old professed to her mother how much she loved and missed her. But when Judge Carew spoke to her in chambers, no lawyers, media, or family members present, Gloria said repeatedly that she hated and feared her mother.

In Little Gloria…Happy At Last, Goldsmith puzzled over why the child was so violently opposed to her mother when she met with Carew. Goldsmith’s theory was that news reports of the 1932 Lindbergh kidnapping terrified her, and she associated her mother’s attempts to secure her with a kidnapping leading to child murder.

But in her memoir, The Rainbow Comes and Goes, Gloria Vanderbilt herself clears it up once and for all. Gertrude Whitney’s attorney, Frank Crocker, instructed Gloria in a series of private “sessions” on what to say to the judge, including telling made-up stories of being hurt by her mother’s former lover, the German prince. On the way to court that day, “I went over the lines I’d rehearsed with Crocker again and again. I hoped I wouldn’t forget anything,” she writes in Rainbow.

Vanderbilt runs down the street with her sons Anderson Cooper and Carter Vanderbilt Cooper.

Since that trial, Gloria Vanderbilt, now 92, has gone on marry four times, give birth to four children, act, model, paint, write books, and design a hugely successful line of “the perfect fit” blue jeans. In her book with youngest child Anderson Cooper, she seems to have come to terms with her tumultuous life. As Cooper puts it, “My mom has been famous for longer than just about anyone else alive today.”

Not every wound is completely healed perhaps. When she mentions Gloria Morgan Vanderbilt, a note of wistfulness hovers.

Her mother, she writes, was a “beautiful stranger, glimpsed only fleetingly.”

This commenting section is created and maintained by a third party, and imported onto this page. You may be able to find more information on their web site.

This content is created and maintained by a third party, and imported onto this page to help users provide their email addresses. You may be able to find more information about this and similar content at piano.io