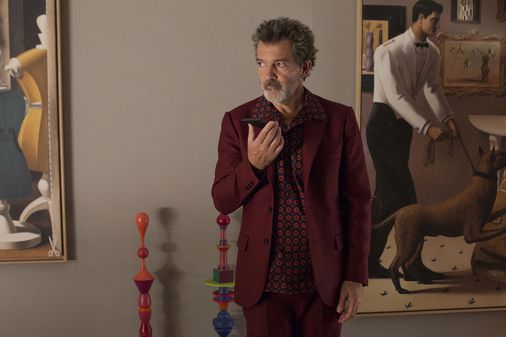 The first thing we see in “Pain and Glory” is a man sitting in a chair underwater, naked but for a pair of bathing trunks. The near-nakedness matters because it lets us see the surgical scar that runs from sternum to waist. Yes, the image is startlingly surreal, but its inspiration is therapeutic. The man, Salvador, is underwater as a kind of hydrotherapy. We soon learn (in a deftly done animated sequence) about his health problems: insomnia, depression, a spinal fusion, asthma, mysterious coughing fits, and pretty much constant pain. That first word in the title of “Pain and Glory” is no metaphor. This is a very medical movie. Along with reflectiveness and (relative) quietude, health issues are part of the film’s septuagenarian side.

Salvador is a famous film director. Playing him is Antonio Banderas. This is Banderas’s eighth movie with Almodóvar, who helped make him a star. The performance won Banderas the best actor award at Cannes this year. He brings an easy authority to the role. It’s more than three decades since he first starred in an Almodóvar movie (“Matador,” 1986). At 59, Banderas retains those smoldering matinee-idol looks, only he’s aged into them. A grizzled beard tempers those looks and lends them a relaxed authority not previously there.

Salvador has been asked to attend a screening of an old film of his. He and the star, Alberto (Asier Etxeandia), have long been on the outs. An attempted reconciliation sets the plot in motion. What keeps the narrative going are the flashbacks to Salvador’s boyhood. The converted cave (that’s right, cave) in which he and his parents lived is like an Iberian hobbit hole. It’s a tribute to Almodóvar that such an unusual, even bizarre setting seems as natural as grown-up Salvador’s swanky-bohemian apartment.

Banderas isn’t the only Almodóvar standby here. Penélope Cruz plays young Salvador’s mother, Julieta Serrano plays her in old age. You can feel Cecilia Roth’s pleasure as the actress who helps put Salvador in touch with Alberto. Nora Navas, as Salvador’s devoted assistant, Mercedes, is a new recruit, but she sure does look like Carmen Maura (wearing a blonde wig, no less).

Just to remind us that he’s Almodóvar — and to make it up to us that Serrano looks so implausibly different from Cruz — the movie ends with a bravura, meta-movie flourish that’s at once dazzling and matter of fact. It’s one more example here of Almodóvar’s ability to take pairs — not just people, but concepts (like, say, present and past, or pain and glory) — and happily join them.

Mark Feeney can be reached at [email protected].