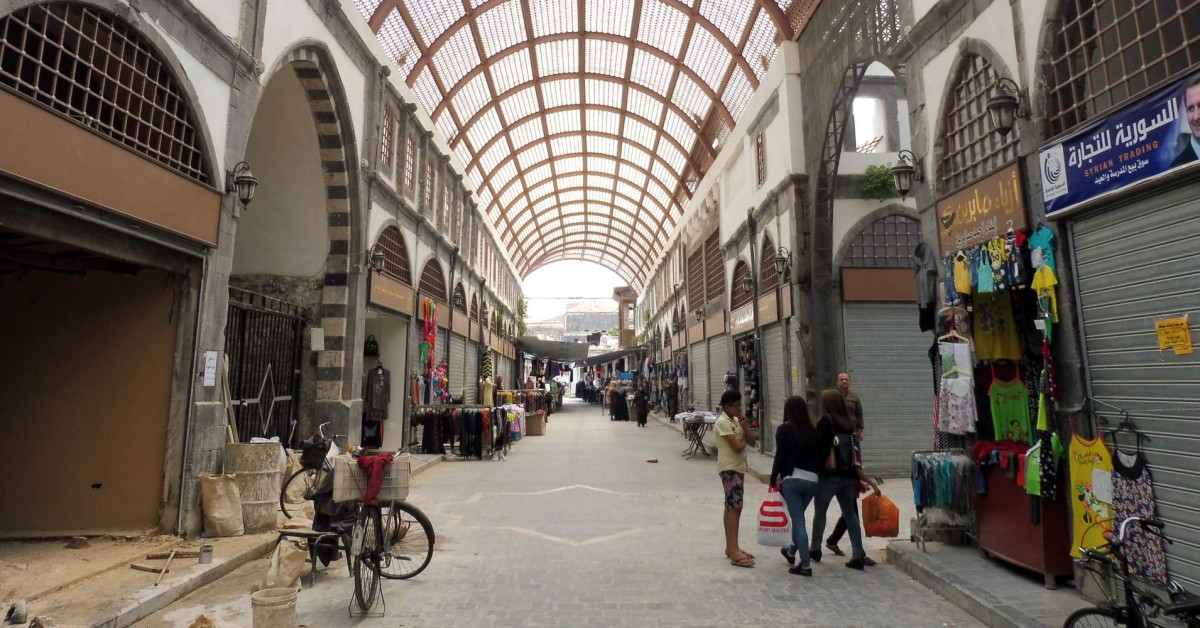 As Ramadan approaches, observant Muslims who survived the six-year siege of Homs can once again shop for dates to break their daily fast from the cozy confines of traditional Middle Eastern markets known as souks. While the COVID-19 pandemic will likely dampen commercial activity — Syria has 19 confirmed cases as of April 7 — temporary closures for public health reasons are nevertheless an improvement from the throes of the Syrian civil war, when there were no souks at all.

These centuries-old markets were victims of the agonizing nine-year-old civil war that appears to finally be on the wane. In its wake, Syria saw historic buildings, ancient ruins, and treasured museums sacked, looted, and destroyed. UNESCO placed six of Syria’s World Heritage Sites on its endangered list. ISIS rebels heavily damaged the Greco-Roman ruins of Palmyra and refugees have taken shelter amidst the ancient villages known as the Dead Cities. The international cultural authority has also raised a red flag for the fate of three historic cities — Aleppo, Bosra, and Damascus — that were very much alive this century, home to millions of people before the war.

Rebuilding Syria to repatriate some of the country’s estimated 12 million refugees and internally displaced persons is an overwhelmingly daunting task. But over the past several years, a combination of UN agencies, international philanthropy, and merchants’ own sweat equity has begun chipping away at that gargantuan goal by bringing traditional souks back to life — sometimes looking quite different from their former selves. Historic preservationists, otherwise notorious sticklers for architectural integrity, are grateful to see the revival of war-ravaged Middle Eastern cities and hope that the Syrian experience can pave the way for peacetime reconstruction in Iraq, Libya, and Yemen.

Last year merchants and customers once again began haggling at the al-Saqatiya Souk in Aleppo’s old city, one of 37 that once surrounded the mighty 13th century citadel now in partial ruins. Fortunately, al-Saqatiya suffered comparatively less damage during the war and its structure was not at risk of collapse. The Aleppo City Council oversaw the eight-month restoration, which was partially funded by the Aga Khan Foundation. The Islamic philanthropy also bankrolled the revitalization of two other Aleppo souks, Khan al-Gumruk and the copper market.

Karim Hendili, an Arab specialist with UNESCO’s World Heritage Centre, recently visited the souks after having been warned by traditionalists that they were “totally fake” compared to their medieval original stonework.

“They were full of people,” he told Next City in February at the World Urban Forum in Abu Dhabi. “Who cares about the stones? It doesn’t matter. This is about the spirit of the place.”

Samir Abdulac, a Franco-Syrian architect and urbanist, chairs the ICOMOS working group for the safeguarding of cultural heritage in Syria and Iraq (ICOMOS, the International Council for Monuments and Sites, is an independent NGO that advises UNESCO on historic preservation). Amidst the wreckage of post-war Syria, he makes a simple argument for starting with souks when it comes to restoring a Middle Eastern city to its past glory.

“They are relatively easier to restore and they are something useful,” he told Next City via phone from Paris. By contrast, he said, rebuilding destroyed housing

stock involves a litany of owners, tenants, and descendants with inheritance claims. While housing is vital, he recommends reconstruction rather than restoration to avoid messy legal entanglements.

In a souk, by contrast, there is generally one owner, like a nearby mosque or the local government, with merchants renting individual stalls. They are eager to regain their livelihoods and can collectively vouch for which merchants were the souk’s pre-war occupants.

The economic imperative drove the restoration of the Homs souk by the UN Development Programme, with 950 stalls returned to service. “After the war there were many unemployed, who could be hired to rebuild the souk and facilitate the return of the merchants,” Abdulac said, describing a steady civic drumbeat: “It must reopen. It must reopen.”

Today, he said, some 75 percent of the stalls are occupied, hawking everything from fabric to sweets to nuts to cleaning supplies. “Everyone except the jewelers,” Abdulac said. “The residents have 1,000 other problems on their mind before buying jewelry.”

In Damascus, municipal neglect allowed the improper storage of flammable materials to spark a fire that tore through the Al-Asruniyeh souk in 2016. In that case, the merchants themselves pooled their funds to rebuild with more modern materials.

Abdulac likewise insists that the built heritage is only one component of what makes souks the heartbeat of Middle Eastern cities. “Souks can have an architectural character, but they are also a place where there is an intangible culture,” he said. “They are part of everyday life for essential commerce. The economic circuit of the city lives in the souks.”

Moreover, such efforts are relatively inexpensive. Aleppo’s most recent souk restoration cost $400,000. By contrast, the United Arab Emirates government is bankrolling the $50.4-million restoration of the 12th century Great Mosque of Al Nuri in Mosul, Iraq, which was blown up by ISIS forces in 2017 during the battle to retake that city. Abdulac likened that project to the restoration of Notre Dame. “There’s perhaps more money than necessary because everyone wants to participate in the reconstruction,” he said.

Humble souks, by contrast, offer a lot of bang for the buck when it comes to restoration. “They are a positive symbol that life can come back,” Abdulac said.

Our special correspondent Gregory Scruggs will be in Abu Dhabi to cover World Urban Forum 10, taking place February 8 through 13, 2020. To stay on top of the essential conversations and innovative solutions presented at WUF 10, sign up for Urban Planet, our global sustainability newsletter.

Gregory Scruggs is a Seattle-based independent journalist who writes about solutions for cities. He has covered major international forums on urbanization, climate change, and sustainable development where he has interviewed dozens of mayors and high-ranking officials in order to tell powerful stories about humanity’s urban future. He has reported at street level from more than two dozen countries on solutions to hot-button issues facing cities, from housing to transportation to civic engagement to social equity. In 2017, he won a United Nations Correspondents Association award for his coverage of global urbanization and the UN’s Habitat III summit on the future of cities. He is a member of the American Institute of Certified Planners.