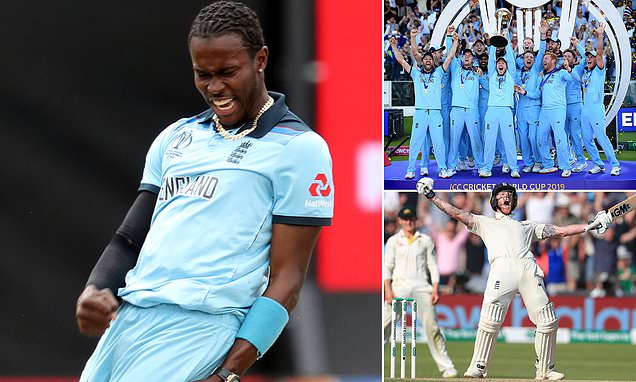 If cricket is able to return this summer one of the key proposals of the ECB is for the Test and white-ball sides to play at the same time to enable as much action as possible to take place.

It is a move backed publicly by World Cup winning captain Eoin Morgan and would provide a late summer fillip. But how would the teams be divided?

Here, Sportsmail cricket correspondent PAUL NEWMAN picks England Test and Twenty20 sides that could play at the same time, with no drop in quality.

After 50-over World Cup glory, Eoin Morgan’s attention will turn to the T20 event this year

Joe Root, meanwhile, could have an England Test team to lead against West Indies

Joe Root’s Test team would play against this summer’s first proposed opponents West Indies and Morgan’s short-form team would take on Australia, who are currently due here in July to play 50-over and Twenty20 cricket.

I reckon both these England teams could be extremely competitive playing at the same time and I’d back them to defeat West Indies and Australia in a glorious festival of late summer cricket this August and September.

The big question, of course, is which team do England’s multi-format players play for?

The teams are actually becoming more separate because of the crowded nature of the cricket calendar in normal times but Ben Stokes and Jos Buttler, to name two, would play in any England side in any format.

I’ve gone for Stokes to feature in Joe Root’s Test side firstly because I think it’s his best format and secondly because Test cricket is England’s stated priority now they have won the 50-over World Cup and are planning for the next Ashes in two winters time.

It is easier to put Buttler in the Twenty20 side because his Test form has not been great and because he is simply the best white-ball batsman in the world in my opinion.

The only question is where he bats. England have been experimenting with him at the top of the order, where he had so much success in the IPL, but I’d rather him float in the middle, coming in as high as three if England get off to a good start or five if not.

Much of the Test side picks itself, with Rory Burns returning after injury and Zak Crawley continuing the big impression he has made as an opener this winter at three in place of Joe Denly.

here. We all know Ollie Pope is going to be an outstanding batsman for England for years to come but I think Crawley is not far behind. The boy from Kent is going to be an absolute star and I reckon he will have a bigger impact on England’s Test cricket over the next few years than Dom Sibley.

At keeper I have left Jonny Bairstow to concentrate on T20 cricket for now and have gone for the hugely unlucky Ben Foakes. In any other era Foakes would so far have played a lot more than five Tests, one T20 international and a single 50-over game but he is cursed by being around at the same time as Buttler and Bairstow.

I think Alec Stewart is right to proclaim Foakes as the best keeper in the world – a real dying art. Plus, Foakes is a good enough batsman to have made a century on Test debut against Sri Lanka and to lead England out of trouble with an unbeaten 61 in his player of the match winning 50-over appearance against Ireland in Dublin last year.

England have to find a way of getting him into their Test side permanently and I think any future Test appearances by Buttler and Bairstow should come as specialist batsmen.

Ben Foakes is an outstanding option with the gloves, especially with Bairstow and Buttler away

In any other England era, Foakes would have a lot more than five Test appearances to his name

The only other question is how to deploy England’s fast bowlers.

Jofra Archer, of course, is an automatic pick for the Test team when fit but I have picked him for the T20s because it is the format he has enjoyed most success in up to now in various franchises around the world and he is a key part of England’s build-up to the next Twenty20 World Cup in Australia in October (virus permitting).

Mark Wood plays in the T20 team, too, as much to protect his fragile body as anything, while the big Test two of Jimmy Anderson and Stuart Broad are still comfortably good enough to lead the attack in English conditions.

I am picking Jack Leach as the sole spinner because the game is in England but Dom Bess has impressed overseas this winter and is a strong reserve for the Test team.

Jofra Archer is a formidable option in any format but this year, T20 could be his calling

In the Test set-up, Stuart Broad and Jimmy Anderson are still capable of leading bowling attack

My only concern for the T20 side is that, in the absence of Stokes, I haven’t got a sixth bowler.

I really wanted to pick the gifted Tom Banton but either of the Curran brothers is a credible alternative.

Now all we can do is hope the crisis eases so that it really can happen. To see two England teams in action would be a wonderful way to end the summer.