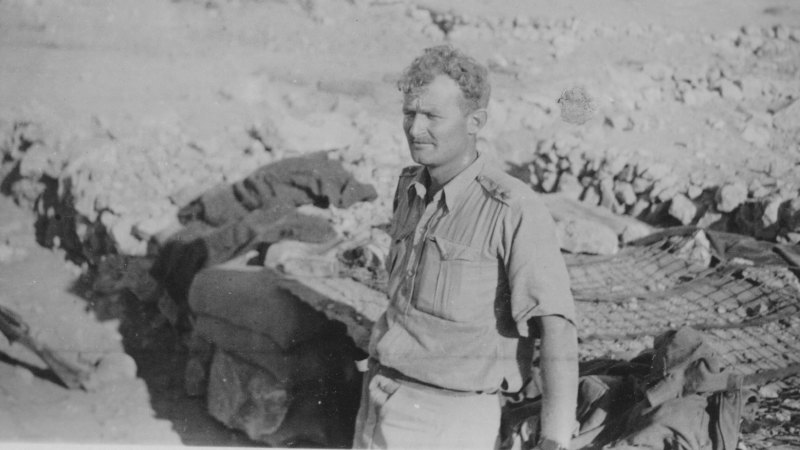 “The position tonight is going to be very serious and if some reinforcements could be produced we would stand a fair chance,” he wrote. “Here’s hoping.”

His was a common predicament among Australia’s Rats of Tobruk. 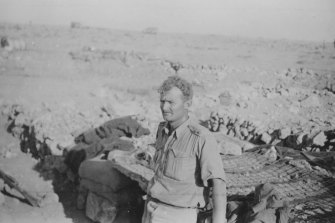 Lieutenant John Rosel in his dug-out in the Libyan desert outside Tobruk.

Rosel’s outpost was part of a semi-circular string of defensive dugouts that sat between Tobruk and a massed German-Italian army led by Hitler’s favourite commander, Field Marshal Erwin Rommel.

The Australians had a wry sense of humour. They needed it. When the Nazis’ propaganda mouthpiece, known as Lord Haw-Haw, taunted them on his radio broadcasts as “rats”, they merrily embraced it.

Of course they were rats, holed up and under siege from Rommel’s tanks, artillery, Stuka dive bombers and ground troops.

About 14,000 Australians, along with four regiments of British artillery and a number of Indian troops, garrisoned Tobruk from April to August 1941, despite almost constant shelling, bombing and ground attacks.

As Rosel scribbled out his bleak message, he knew he and his comrades were about to experience hellfire. Orders had come from their commander, the Australian General Leslie Morshead, known as Ming the Merciless.

“All positions are to be held at all costs,” Morshead ordered.

“No withdrawals will be made. If positions are surrounded by the enemy, they are still to be held and will be relieved by counter-attack. Tanks should be allowed to pass through to be engaged by anti-tank and field guns in rear. Infantry following are to be engaged and defeated.”

Most of Australia’s forward posts were duly hammered and overrun by Rommel’s tanks. The Panzers were eventually stopped by minefields and anti-tank fire.

Rommel’s attack was a failure. But Australia’s losses were heavy. 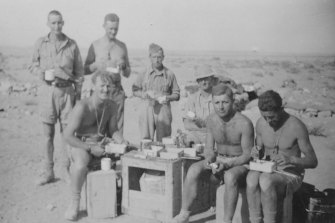 Lieutenant John Rosel (seated left) and the Rats of 2/24 Battalion snatch time for lunch outside Tobruk.

Rosel’s Battalion, the 2/24, lost three rifle company commanders and more than six of its 12 rifle platoons. It was the battalion’s first major action: the Battle of the Salient.

Rosel fought desperately for his post (S10) through a night and a day.

“S10 was still held by Lieutenant J.S. Rosel and half a dozen men, although it was under heavy fire from positions beyond,” a subsequent report stated. “These seven had beaten off several enemy attacks and had only a thousand rounds of ammunition left.”

The Melbourne bank clerk was awarded a Military Cross for gallantry.

But when his war was finally over, he refused to speak about his days of battle.

His son, Mike Rosel, had only albums of photographs taken by his father during the war to fire his imagination.

When he peeled the photos from their album pages, he found tantalising captions and little messages of love written in pencil on the back to Lorna Knowles, the girl who became John Rosel’s wife and Mike’s mother. But there were no letters. No diary.

Mike Rosel was a journalist in Melbourne for many years. After his father died, aged 64, he couldn’t let go of the unanswered questions. Eventually, he decided to fashion a book around some of the pictures his father had taken during the war.

Undertaking research at the Australian War Memorial, he was stunned to discover a collection of 181 wartime letters written by a Private Harry Frazer to his parents at Swan Hill. 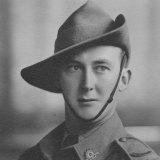 Many of Frazer’s letters were written from Tobruk, where he had served – glory be – in the same battalion as Rosel. A military bandsman, Frazer had swapped his cornet for a rifle at Tobruk in the days leading to the Battle of the Salient.

One of his letters was written in the week of that battle.

“Things are pretty hot up here believe me, but I’m hoping for the best,” Frazer wrote on May 4, 1941. “We have been in action, some of it pretty fierce, and just at present are in rather a tight spot, but we are hoping for relief soon now. Sleep is a thing that one has to grab when he can now, as we are continuously on the lookout for the enemy who has been very active all this week; on top of it all Mother I’m homesick.”

Mike Rosel had found his eyewitness, who wrote of combat as his father never had.

Armed with such treasure, he had his book ready to launch at Melbourne’s Shrine of Remembrance in the lead-up to Anzac Day.

Mike Rosel’s book A Rat of Tobruk, with his father on the cover.

Plans, however – as any soldier or author might tell you – are made to break hearts.

A virus began spreading. The Shrine closed its doors. A whole population bunkered down.

No one can say what Lieutenant John Rosel and Private Harry Frazer might have thought about this strange new siege.

A Rat of Tobruk: A Digger’s Lost Images of the Siege by Mike Rosel can be ordered from Arcadia – Australian Scholarly Publishing.

Tony Wright is the associate editor and special writer for The Age and The Sydney Morning Herald.

Most Viewed in National

Redditors who quit their jobs in a blaze of glory, what’s your story? : AskReddit