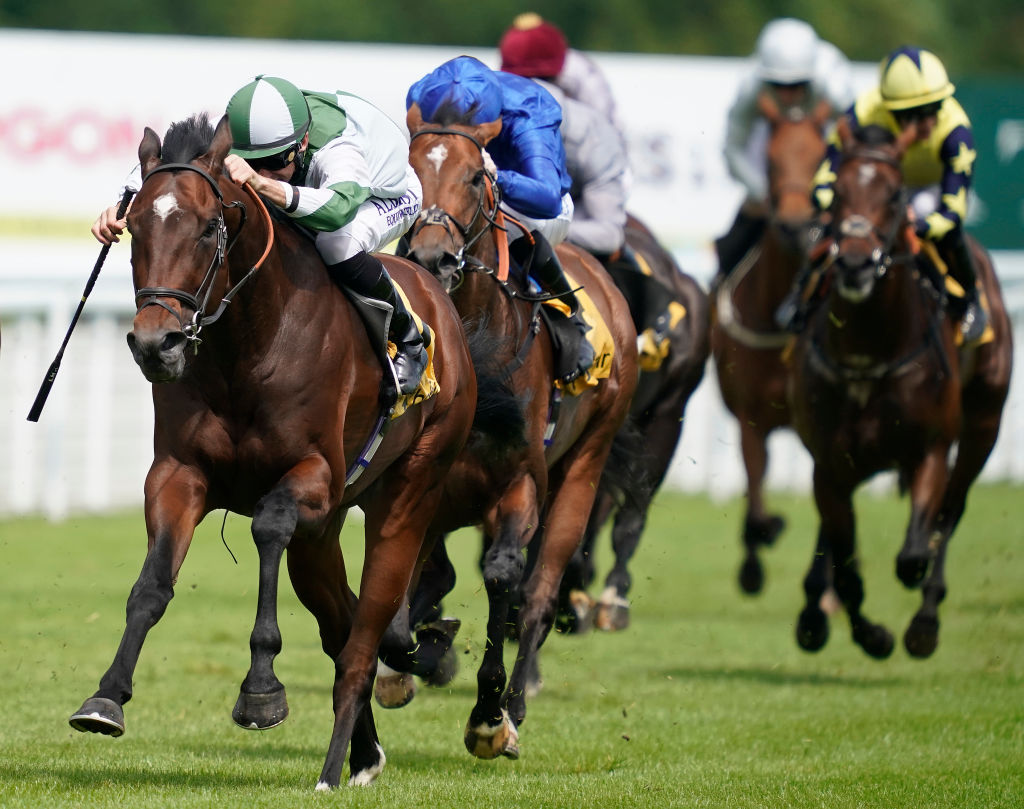 WE HAVE already seen some incredible horses at Goodwood this
week and this afternoon Battaash gets the opportunity to match Stradivarius’
feat by winning at this meeting for a third straight year.

Charlie Hills’ speedball is ideally suited to this downhill
track and as long as he doesn’t boil over in the preliminaries, the Group Two
King George Qatar Stakes (3.35pm) looks his for the taking.

He has comfortably landed the last two and today’s
opposition don’t look particularly strong, so it’s no surprise the bookmakers
are offering a best price of 1/3.

This is a race to watch and enjoy rather than bet on, but
there are plenty of other punting opportunities.

With a prize fund of £150,000, the Unibet Golden Mile
(3.00pm) is one of Europe’s richest mile handicaps and Frankie Dettori fans
will be out in force as he is riding hot favourite Mojito.

Trained by William Haggas, who won this race 12 months ago
with the Queen’s Seniority, this five-year-old shrugged off an absence of 637
days to comfortably win the Coral Challenge at Sandown last month.

Since then he has been the hot favourite for this race but,
although favourites have won two of the last three renewals, only four in total
have been successful in the race’s 32-year history.

There is also the dreaded bounce factor to consider, so at
just 7/2 I’m happy to look elsewhere.

The draw is crucial in mile races at Goodwood with a low
stall a major advantage – in the last decade, eight winners have come from a
single figure berth.

Mojito has stall nine, which isn’t the worst, while last
year’s winner Seniority will have to defy gate 11 if he is to become the first
dual winner.

Wentworth, trained by Richard Hannon Snr, was the last
three-year-old to win this prize in 2013 and I think BEAT LE BON will
repeat the trick for his son.

This son of Wootton Bassett has won his last two races over
seven furlongs, including one success at this track, and he shapes as though
the step up to a mile will suit.

Ideally drawn in stall three and with just 8st 13lbs on his
back, he looks a great each-way bet at 10/1 with Ladbrokes.

I always like to throw a couple of darts at big handicaps
like this and my second selection is Keith Dalgleish’s WHAT’S THE STORY at around the 14/1 mark.

Unsuited by soft ground in the Royal Hunt Cup at Royal
Ascot, either side of that he won a competitive mile handicap at York and was
then an excellent third to Pivoine in the valuable John Smith’s Cup last time
out.

He is a very consistent horse in these big handicaps and
even though he is yet to run at Goodwood, his draw in stall two is perfect.

It was hard not to be impressed with DUKE OF HAZZARD at Newmarket in a mile Listed race last month and I expect him to follow up in
the Group Three Bonhams Thoroughbred Stakes (2.25pm) today.

He won his maiden at this meeting last year, so we know he
handles the track, while PJ McDonald, who has been among the winners this week,
retains the ride.

The only slight worry is that his Newmarket win was in
first-time blinkers, so they will need to work again, but I think that’s a risk
worth taking.

It’s a competitive race with the likes of King Ottokar,
Turgenev and Biometric, but he looks the best bet at a general 9/2.

Sir Michael Stoute has won the last three editions of the
Group Three L’Ormarins Queen’s Plate Glorious Stakes (4.40pm) and he can make
it four in a row with reigning champion MIRAGE DANCER.

This five-year-old son of Frankel is unbeaten in three
starts over course and distance and can continue his fine record on the Sussex
Downs.