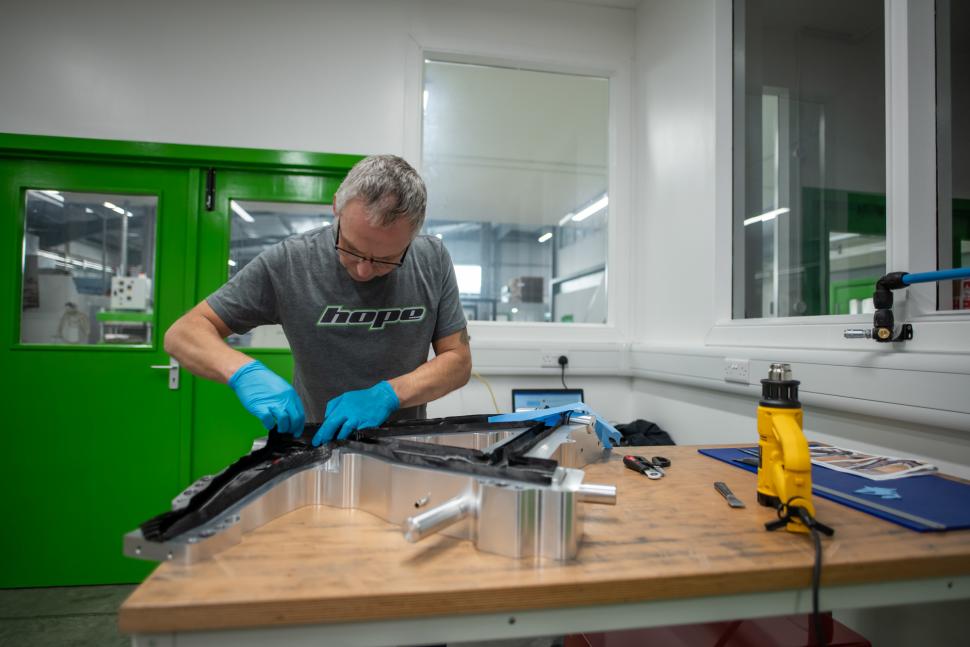 Born in a Lancashire garage over 30 years ago, Hope Technology has become a rare success story in modern day British manufacturing. It is justly renowned worldwide as a brand created from passion and innovation for cycling, grounded in solid old-fashioned northern values with its roots firmly on the same level ground as its feet.

> How the Hope/Lotus track bike was designed and made

From pioneering mountain bike disc brakes through to the wildly eccentric Team GB track bike, Hope rarely follows the trends that have arguably come to dominate the ever-increasing consumerism that has taken over the bike industry. Legend has it that Hope was created after its founding fathers, Ian Weatherill MBE and Simon Sharp (who sadly died in 2016), were made redundant from the Rolls Royce Aerospace factory; although as Ian explains, the entrepreneurial spirit was already deeply embedded:

“Well, we’ve always done it [business], since we were kids. We had a paper round when I was a kid, and I was a newsagent by the time I was 14. There wasn’t one in the village so I got to buy and deliver all the newspapers. I was too young to officially take the money so had to get mum to sign and take it.

The quest for more time to follow their motorised passion got the Hope ball rolling: “I was riding motorcycle trials with Simon at the time, which is how we got together. Our plan was not about bikes then, it was trials riding”, explains Ian.

“The idea was that we’d set up in business and when we’d made £200 in a week, which is what we were then earning at Rolls, we’d take Friday off and ride our trials bike on Thursday and Friday, and compete on Saturday and Sunday.”

Keeping things in the extended family was part of that plan from the start: “I borrowed some money off my dad, bought some machines and we set up in his 250 sq. ft garage, that’s how me and Simon started. We worked from 6am to midnight for 15 years, which wrecked the trials riding in retrospect!”

Mountain biking came along later: “We were 3-4 years in when we started mountain biking, mostly for trials training. Then Alan [Ian’s brother] came back from travelling and worked with us. There were about six of us then, and making bike parts just developed from there, from making our own components.”

Alan and Ian Weatherill take some rare time out

Many of the current Hope staff members are also passionate cyclists, which plays a huge part in their development and ideals when it comes to products as Alan affirms: “We’ve always been rider-owned; we just never really pushed it, whereas newer companies seem to make a big deal about that.”

Sadly Simon Sharp passed away before Hope became a fully-fledged track frame producer: “We had a blip when Simon died, and I’d suffered for a couple of years before that”, says Alan.

“But that was personal stuff, not business. It did affect the company, but that’s all sorted out. Simon’s widow and I run the company now, and it’s just carried on.

“Before Simon passed away I only worked 3 days a week, and we always made money. It’s a bit of an obsession [making money]. You always have to make money on something – sell it and make money.”

In such a competitive market it’s hard to imagine how Hope manages to continue to manufacture in Britain: “By also manufacturing everything it makes the whole evolution process slower, and we don’t want anything sent back”, says Ian.

“With the components we tend to make about 10 of them, to use ourselves. They then go through about 10 changes before they’re ready to go out.

“Even once they’re out there are changes; but as we’re only producing small numbers at a time we don’t need to go back to sub-contractors, we can make those small changes easily ourselves for the next batch.

“It sort of slows things down but speeds them up too, if that makes sense. You can do more things, but it takes longer [to produce].”

Sticking with products that work is also a major part of this viability: “Other people bring out new models all of the time, we don’t.  We change colours, but we don’t need to make new models. “

Even so, Hope is still a small but profitable brand: “Another thing that ‘does for us’ is that we’re only at about $20 million turnover, whereas our next serious competitor is $800 million (SRAM) and Shimano around $2 billion; so we’re so small, miniscule in comparison.”

Hope started making MTB frames a few years ago, which may seem insane when you compare this to the competition it faces. As Ian explains: “For a company of our size to go against Santa Cruz or BMC, it’s crazy what we’re doing.

“They’re stupid commercial decisions, but we’re doing it because we like doing it, and it’s been a lot of fun. It keeps it interesting.

“What we do with componentry funds all the other stuff, like the bikes and carbon bars. We’ve got a 3D printer now and are printing carbon parts, it keeps us busy and distracted all of the time.

“There’s been over £1 million gone into building the mountain bike, and now we’re ready to make our own machines to do the carbon. People just don’t do that for production.

“It’s mostly aerospace or F1 for composites, which means a ridiculous price. By making our own tools to do it we’re trying to make it commercially viable.”

Eastern promise has little appeal; instead Hope stick firmly by its ‘built in Britain’ stance: “We’re not going Chinese [on manufacturing]. This is all made in Britain, along with all of the controls and regs that go with that.

“We’re not dictated to by anybody on what we do. We don’t have shareholders to worry about, so we just do what we want to do.”

As it has been from the start, Alan explains that the decision to initially build a frame came from owner demand: “Ian and Simon decided they wanted to make a bike for themselves.

“Normally [for carbon frames] you’d make an aluminium ‘mule’ with all of the geometry set up, test it and then look at things to work it all out; but that relies on welding frames together, and we don’t do fabrication welding.

“It was actually easier to decide on using carbon, because we can machine a mould. It’s easier for us to make moulds and lay up a carbon frame and test it. The first one we made we still have. The geometry didn’t change, it was spot on although the tube shapes have changed slightly.”

Hope’s growing knowledge in the carbon fibre field indirectly led to the construction of the weird and wonderful British Cycling track bike: “We had been working with British Cycling for a number of years on MTB projects, and also a few modifications to track bike axles, and handlebar and stem connections”, explains Alan.

“During this time Tony Purnell [Head of Technology at British Cycling] visited our facilities. He then suggested that we would be a good partner to work with on a new bike concept that BC and the English Institute of Sport were considering. This was when the hard work began.”

“The original concept was presented to us, and we then had to work out a way of manufacturing this in the timescale required.

“Usually the aero work is performed on the bike and then on the rider. This was the first time that someone had really considered the full interaction of the rider and bike as a whole.

“The idea is that the wide forks break the airflow over the rider’s legs, and then the ‘swat’ seatstays bring the resulting turbulent air back under control. That’s the basics of the concept.”

The bikes are produced in the same factory as all other Hope components: “We manufacture the frame, including rear stays and the wheels in our Barnoldswick factory. We also manufacture all the moulds for these parts and layups”, Alan says.

Hope does get by with a little help from its friends when it comes to completing the build: “The dropouts and several connections are titanium 3D-printed, and this is done by Renishaw [a leading scientific and engineering company, who also specialise in 3D metal printing]. The bars and forks are supplied by Lotus.”

With the postponement of the Olympics due to the pandemic, the track bike production was put on hold for a while, but is now back on the ‘new normal’ schedule.

Thankfully Hope is doing well and weathering the recent strife, as Alan tells us: “Initially we had dealers and distributors cancelling scheduled orders as they were unsure of the effects of the pandemic; however it quickly became apparent that bikes were a great form of safe transport and exercise, and our order book was quickly overflowing.

“For the safety of our staff and local community we pre-empted the UK national lockdown and closed our whole facility in late March. Once we had safety measures in place, we gradually opened up production again in late April and tried to cope with the floods of orders.

“We’re still seeing demand outstripping supply and have invested over £1.25 million in new machinery to keep up; although we are very cautious, as there is still uncertainty in the health of the economy.”

Hope also contributed to the early PPE manufacturing and supply call, and all that was done without the fanfare and publicity some other brands received. This just about sums up Hope… it’s more than just a name.

Foreign Currency – A STORY FOR GLORY #71