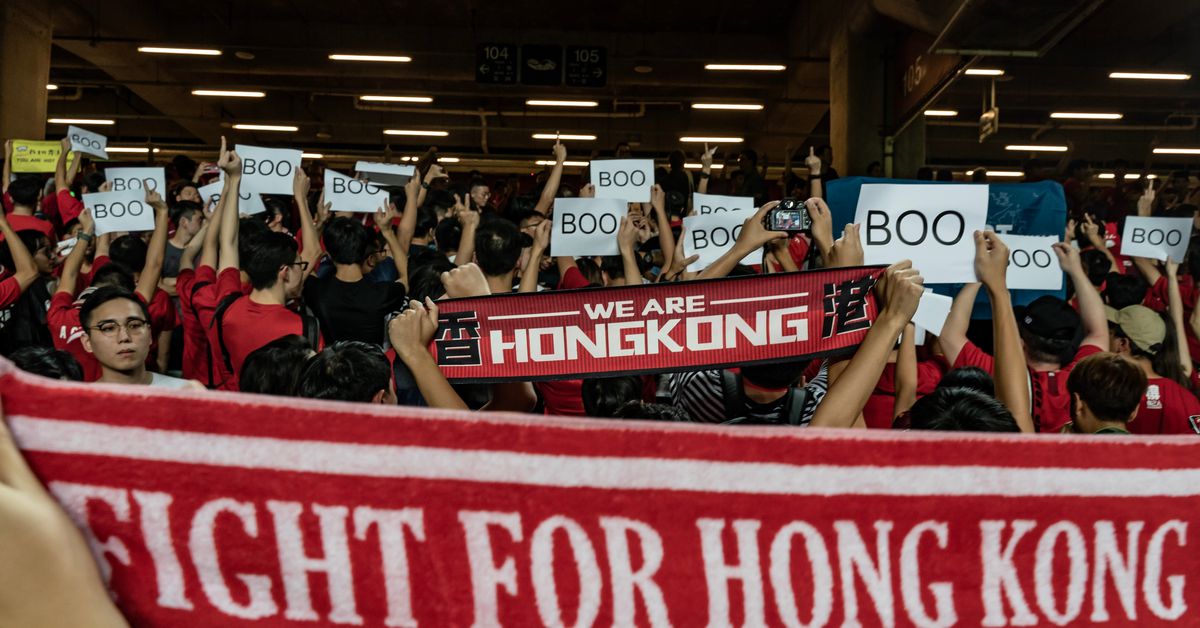 In an online video, protesters in riot gear sing and play instruments. They have violins tucked under chins covered with masks, drumsticks swinging in black-gloved hands. And together, in Cantonese, they belt out the soundtrack to the Hong Kong resistance: a new, if unofficial, national anthem.

“Glory to Hong Kong” (Or “Glory be to thee, Hong Kong”) has become the rallying cry of pro-democracy protesters in Hong Kong, one that’s being sung in unison by crowds in malls and even at a soccer game this week. It’s the latest act of opposition by demonstrators, who for months have been resisting creeping Chinese authority in the autonomous territory, and it may be one of the greatest signs yet of just how cohesive the resistance really is.

An anonymous user with the name “Thomas dgx yhl” posted the song and lyrics at the end of August to LIHKG, an online forum that’s a bit like Reddit and a popular way for protesters to communicate. He’s believed to be the composer and, according to the New York Times, he asked other users on the forum to record themselves singing the tune:

He collected audio versions via Google Drive, and assembled them together to make it sound as though a choir were singing. He adjusted the lyrics based on suggestions in the forum.

The anthem runs just a couple of minutes long. “We pledge: no more tears on our land,” it begins. “In wrath, doubts dispell’d we make our stand. Arise! Ye who would not be slaves again: for Hong Kong, may freedom reign!”

The song has spread since then, including that popular video of a riot-gear-clad chorus and orchestra playing the song, interspersed with scenes from the months of Hong Kong protests. (Here’s the version with English subtitles.)

The anthem may have spread online, but demonstrators have blasted the resistance theme song out in public. At a World Cup qualifying soccer game on Tuesday in Hong Kong, for example, crowds booed the Chinese national anthem and sang “Glory to Hong Kong” instead.

Crowds have also gathered in the hundreds and thousands this week to sing all over the city.In some cases it’s led to conflict: At Hong Kong’sbusy commercial center known as the International Financial Center, or IFC, pro-Beijing counterprotesters descended on the mall, waving Chinese flags and singing the Chinese national anthem. That led to a literal sing-off, with workers and protesters drowning out the pro-China activists.

At IFC mall, the 1st anthem battle: a bunch of pro-CCP uncles showed up w a big PRC flag. They were surrounded, outnumbered & outsung by #HK patriots with ‘Glory to Hong Kong’. pic.twitter.com/UdomTD5NSW

The anthem protests continued Thursday night, with thousands gathered in the IFC and other areas of Hong Kong, singing “Glory to Hong Kong” over and over.

Est. 21:45: Crowds by Times Square in Causeway Bay have been singing “Glory to Hong Kong” – the new protest anthem – on repeat for over an hour. At this rate, song sheets might become redundant for most in a few weeks. pic.twitter.com/O8vrdGvKQG

“The song spells out our heartfelt feelings,” a 33-year-old man who joined in the singing this week told the Guardian. “It is a song that stands for our fight.”

“Glory to Hong Kong” is another rejection of China’s influence

The lyrics are very national anthem-y — “For Hong Kong may freedom reign!” goes one line— but the song also speaks to the untenable situation the territory finds itself in.

After taking over Hong Kong in a war in the 1800s, Britain returned it to China in 1997 with an important stipulation: The city would partly govern itself for 50 years before fully falling under Beijing’s control. So until 2047, the expectation was that the city and the mainland would operate under the principle known as “one country, two systems.”

But in recent years, Beijing has persistently tried to exert its influence over Hong Kong and control it more tightly. The controversial extradition bill that initially sparked these protests in June became an example of this.

The bill would have allowed for case-by-case extraditions to countries that lack formal extradition treaties with Hong Kong, most notably mainland China. Critics worried that Beijing would take advantage of this law to arbitrarily detain Hong Kong’s citizens, such as those who openly dissent against the Chinese government or advocate for human rights.

But as protests intensified — and as the government and police cracked down on the movement — the resistance morphed into something much larger: a fight to preserve democracy in Hong Kong. Just last week, in fact, Hong Kong’s Beijing-backed government formally withdrew the extradition law after months of refusing to do so. At that point, many protesters simply said: “too little, too late.”

“Glory to Hong Kong,” then, is an expression of demonstrators’ fight to preserve democracy and its unique status within China for as long as they possibly can. The song recognizes the tremendous challenge they face. The odds that protesters can fend off China forever or win some of their demands — such as universal suffrage — are extraordinarily low. “Though deep is the dread that lies ahead,” one line reads, “Yet still, on our faith, on we tread.”

The Chinese government largely ignored the Hong Kong protests when they first began in June. But its leadership has grown increasingly impatient with the continued unrest, using harsher rhetoric against demonstrators and waging a disinformation campaign via tightly controlled, state-run media to discredit the movement.

The country is also fast-approaching a hugely important date: the 70th anniversary of the founding of the People’s Republic of China on October 1. President Xi Jinping does not want the major celebration marred by scenes of protests against his government. The increasingly tense and sometimes violent demonstrations were already testing China’s resolve.

Crowds of Hong Kong’s citizens peacefully singing their own anthem is one of the more powerful acts of defiance against Beijing. Which means China is likely to continue to push back — and for the chorus of dissent to grow even louder.

The story of P.J. Fleck’s one moment of NFL glory with the San Francisco 49ers