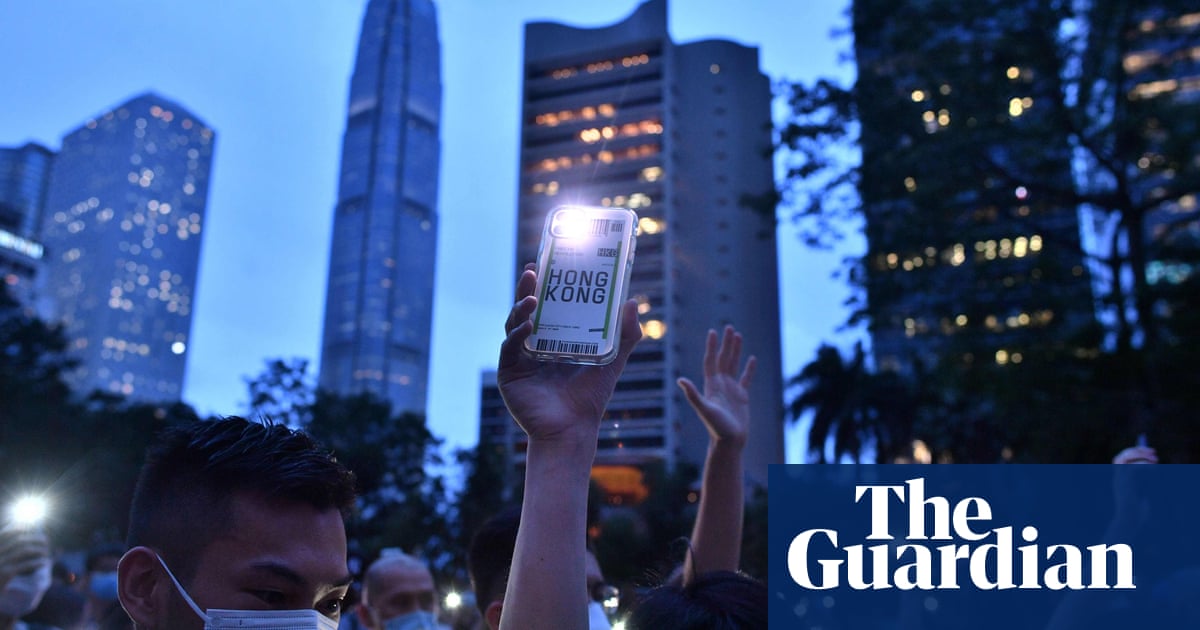 Thousands of protesters who took to the streets of Hong Kong in defiance of a police order to mark the first anniversary of the anti-government movement have been charged at by riot units who arrested several of them.

Crowds began to gather in the Chater Garden park in the business district of Central in the early evening. They began chanting slogans but dozens of riot police descended on them, conducting body searches and ordering people to leave.

A man who swore at police officers was arrested. Crowds were dispersed and began gathering on pavements. Later, protesters formed a line and began marching, yelling slogans and waving banners as they spilled on to the main thoroughfares.

“Hong Kong independence, the only way!” and “Rejuvenate Hong Kong, revolution of our era!” were among the slogans being chanted by the crowd, many of whom were holding up their mobile phones with torchlights and umbrellas in anticipation of police firing teargas. Police raised blue flags to warn the crowds against taking part in an unauthorised assembly.

Riot police charged at the crowds at about 7.30pm local time and chased protesters along the main street. Police tackled some to the ground and made several arrests. Crowds began to shout anti-police slogans while police formed a line and marched down the streets.

“It’s very emotional today, it feels like the people’s spirit has not been broken,” said a protester in his 40s who declined to give his name. “It shows that it’s all still there and that’s really heartwarming. It’s tough but there is still a sense of hope among everyone here.”

“We fight for freedom but we fight for our Hong Kong, a free place where we have our identity, but that’s been stripped away,” he said.

The 1 million people who first marched against an extradition bill on a hot June day in 2019 are now having to navigate a police force with little tolerance for protests, increasing interference by Beijing and the risks of the ongoing coronavirus pandemic.

At lunchtime on Tuesday, hundreds of protesters had gathered in several shopping centres to chant pro-democracy slogans and sing the unofficial anthem of the movement, Glory to Hong Kong. Some held signs saying “We can’t breathe, free Hong Kong”, and flags emblazoned with “Hong Kong independence” and “rejuvenation of Hong Kong”.

“This is the start of Hong Kong losing our freedoms,” said Anita, a retired teacher. “I’ll continue to do whatever I can to show my support.”

A 14-year-old boy who gave the surname Lee said he had protested for the first time in June last year. “We now realise how scary this regime is, that they arbitrarily arrest activists,” he said.

Leung Kai-chi, an analyst at the Chinese University of Hong Kong, said: “I don’t think the passion has subsided much but the problem is that many actions are now not allowed in the current circumstances.”

Protests have been banned in effect since March by the extension of pandemic restrictions on gatherings. The continued restrictions – which limit gatherings to eight – apply despite entertainment venues and religious gatherings being allowed to

resume, and theme parks being given the green light to reopen.

Recent rallies have been responded to with thousands of officers, water cannon, teargas, mass stop and searches and indiscriminate firing of pepper balls.

Hong Kong’s chief executive, Carrie Lam, told press on Tuesday she hoped everyone had learned a lesson, “including the administration and legislators”. “Hong Kong cannot afford to be more chaotic anymore,” she said, urging people again to support the national security laws being imposed by the Chinese central government.

It followed rare comments on Monday by Zhang Xiaoming, the deputy director of China’s Hong Kong and Macau Affairs Office, who claimed the national security laws would give the majority of Hongkongers more freedom and protection.

“They can be free from the fear of violence. They can ride the train and go shopping freely. They can speak the truth on the street without the fear of being beaten up,” he said. “In particular, they no longer have to worry about young people being brainwashed.”

Twelve months ago people filled the streets to protest over the proposed bill that would have allowed extradition to mainland China, which human rights activists feared would allow the Chinese Communist party (CCP) to detain opposition figures and dissidents.

The peaceful protest, which took over downtown Hong Kong, was met by police in riot gear when authorisation ran out at midnight. It marked the beginning of what would grow to be a paralysing pro-democracy movement demanding accountability for police brutality and the fulfilment of a long overdue obligation to give the people universal suffrage.

The protests became routine, leaving in tatters the city’s reputation for stability, and a population divided.

By the time the government backed down and withdrew the extradition bill it was too late and every protest since has listed “five demands, not one less”.

Cardinal Joseph Zen, the sixth bishop of Hong Kong and a high-profile pro-democracy figure, said the extradition bill was “an ugly gesture” from the government.

“They failed, but during that period we could see both the local government and central government were determined to crush our freedom of speech, and so we went marching,” he told the Guardian. “One million, 2 million, but still the government didn’t listen to us.”

The moderator of one of the pro-democracy movements’ social media accounts said protesters were keeping “a steady pace” to achieve their goals.

“We believe we are standing at the beginning or an initial stage of retrieving our Hong Kong and to be honest. We do not know how to achieve this as we do not have an army to protect ourselves,” the moderator said.

“Therefore we are trying very hard to attract the international community’s attention and with the aid of the powers of other regimes, we have a chance to stop what the CCP is doing.”

Ancient Egypt: the Mythology – The Story of Re