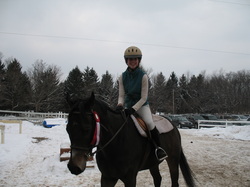 Hey, the names Kelsey Lumsden. I’m a major horse enthusiest since the approx. age of 3. My first encounter with a horse was when i was out on vacation, and there was a pony ride at a nearby farm that we had visited while with my grandparents. That small pony had stolen my heart, and I was hooked on riding. So, shortly after that trip, i had put on my best “daddy’s little girl” face, and somehow managed to convince my parents to start allowing me to take lessons.

At this barn had been where my actual career into riding had been happening. While here, i wasnt just introduced into the way of riding english, but into the world of jumping and horse showing. I had started taking many lessons a week, even working to recieve extra lessons. I had started doing schooling shows, and wasnt doing all that bad in it. Though after a few years there, my trainer had decided to stop advancing me, but actually had somehow decided that i wasnt good enough to be jumping, so i switched stables once again. 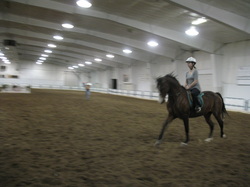 Since then, I have left that trainer, and have been doing all my own horse training. Glory, who was orrigionally a saddleseat horse, is now a hunter/jumper, and i did all the training without the help of a trainer. I Have

kept blossoming as a rider, and I strongly believe that my goals are in sight. 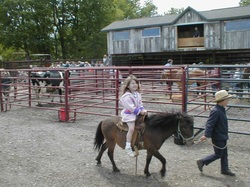 My first lesson horse was a sweet old mare named Ginger. she was a small little pony, though really took care of me, but due to the conditions there i had no longer been able to ride there. So, we switched to another farm. During this time at the new farm, i had been doing western, just because they really never did english there, but one day, there was a girl out there riding english, and i knew that it was for me. So, after careful consideration, i switched stables again. This time to a hunter jumper barn. 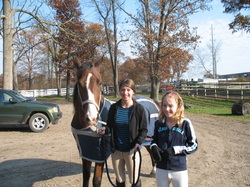 This is where i had come across probably the biggest conflict I had to deal with up to that point. It was all caused by me getting into saddleseat, and i had slowly started moving away from my goals of being a top notch jumper. This is where i aquired Glory, At the time, he had been purchased for use mainly as a saddleseat horse, with the ablility to go into the hunt ring if I so desired. So, after a freak accident a week before a show, i had to switch from saddleseat back to huntseat, and that was probably the best thing for me,

The Power of Hope – A Review of Adenike Oyetunde’s Adénìké: Your Story, Your Movie, His Glory