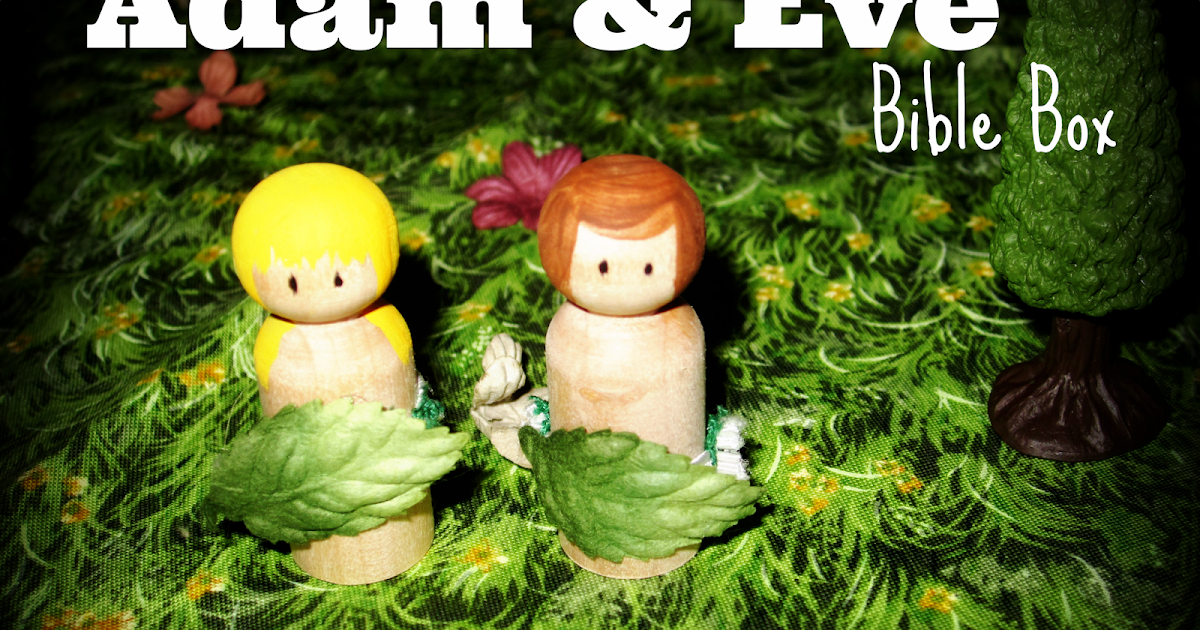 This is my first attempt at making a Bible Story Box or Godly Play box
for my girls’ Bible time. I love the idea of Godly Play which is pretty
much just using actual objects that the kids can feel and touch to help tell Bible stories. It
helps the Bible stories come to life for them and I also love how having
these Bible Boxes available to them allows for them to become avid
storytellers reenacting the Bible stories themselves, which is just
another way of remembering the stories. They say the best way to learn
is to teach. So, with this principle I have a day near the end of our
weeks bible lesson and have her teach and tell me the story herself.

What you’ll need for your Adam and Eve Bible box:
-Adam peg doll

-Leaf coverings (tutorial below, after story) 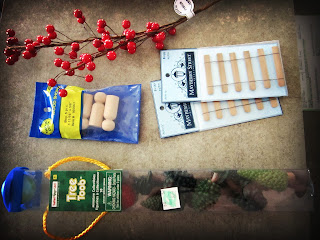 The Story:
Remember when God created the whole earth? He was creating a special place for his most favorite creation: man. 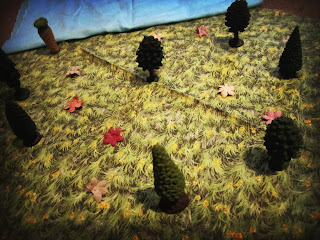 He created a man on the sixth day.  His name was Adam. 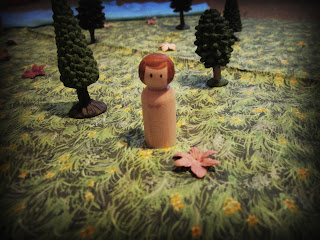 God placed Adam in the garden of Eden, which had lots of trees with fruit to eat, water to drink and lots of animals.  Everything was perfect in the garden.  God gave Adam a job in the garden.  His job was to name each of God’s created animals and to rule over them (take care of them). 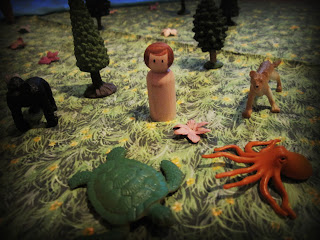 So, Adam saw each of God’s creatures and he chose a name for each animal.  What was the name Adam gave this animal? (Hold up an animal) What about this one?… (at this point we put the ocean animals in the water). 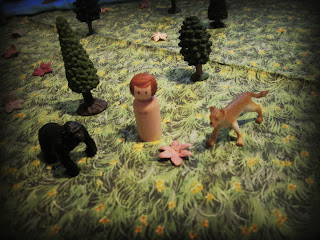 Adam enjoyed all the animals but in all the animals God made there was not a suitable companion for him to talk and relate to.  So Adam became lonely.  God saw this and he said, “This is not good that man be alone.”  So, God put Adam in a deep sleep. 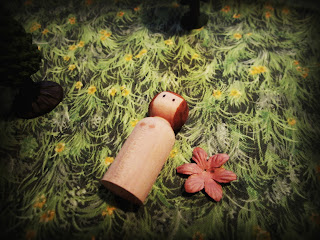 Then while he was sleeping God took out a rib and made from it a woman: Eve. 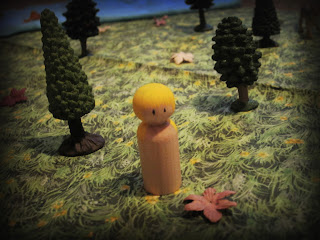 Eve was created as a perfect help meet to Adam.  Adam loved Eve and took her as his wife. 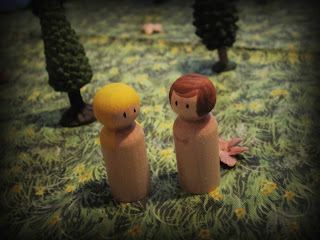 Every day Adam & Eve lived in the garden enjoying all it’s fruits and splendor and even walking with God in the garden.  But God had given them a rule. One simple rule: “Don’t eat from the tree in the middle of the garden.  If you do, you will surely die.” (Make sure to point out which tree is the middle tree. Ours has painted red ‘fruit’ on it although it’s hard to see in pictures.) 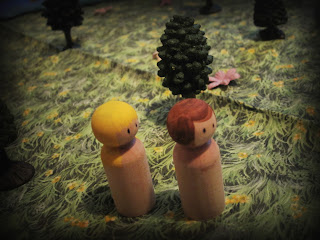 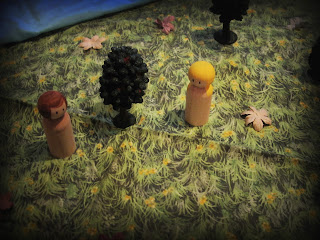 One day Eve was walking in the garden and a serpent came up to her. 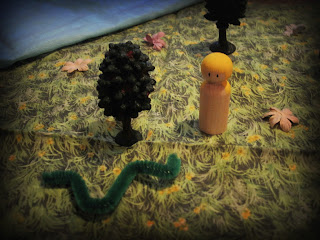 He asked her about the rule and brought doubt in her heart by asking, “Did God really say you must not eat from the fruit?  You won’t die.”  The serpent said, “It will make you like God.”  Well, that sounded pretty good to Eve, so she took a piece of the fruit and ate it. 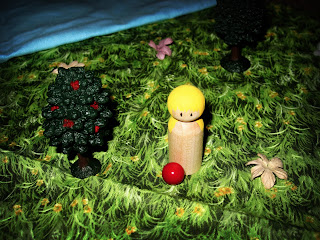 Then she took a piece to Adam and he ate it too.

At once, they realized that they were naked! 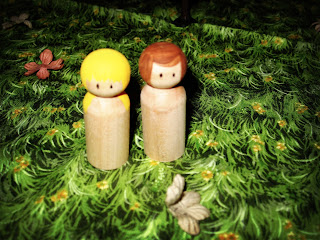 So, they made some clothes out of leaves to cover themselves.

Then they heard God.  Instead of walking with him they now hid behind a
tree. God called for them.  And they answered and said, ‘Here we are
Lord.”  God asked, “Why are you hiding? Have you eaten from the tree I
forbid you not to?”  “Yes, Lord” they answered. 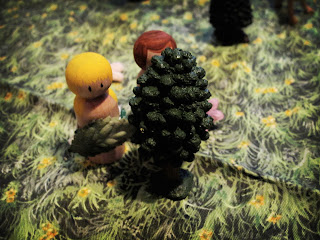 Then Adam blamed Eve, and then Eve blamed the serpent saying he tricked her. Because of their bad decision he told them they could no longer live in the garden of Eden.  They had to leave and from here on out they had to work and struggle to get food and shelter. 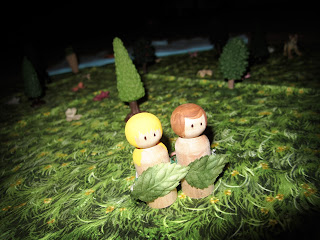 And to make sure they wouldn’t try to come back in god protected the entrance to the garden with an angel with a flaming sword. 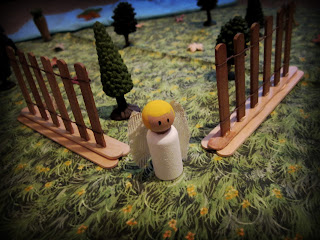 Now, here is a quick tutorial of how I made the leaf coverings. You’ll need your peg dolls and some of the really thin elastic. 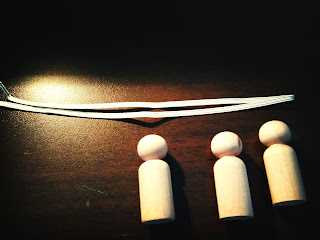 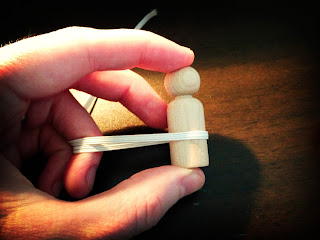 …Then, pulling really tight because it will be leaving a little extra I sewed it back and forth a ton in my machine.

Here it is afterwards.  If you have a lot of extra string simply cut off.

Here I kept doing a few more on the same string of elastic.  It looks cluttered but once I cut them off it will make more sense. 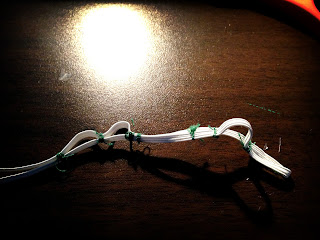 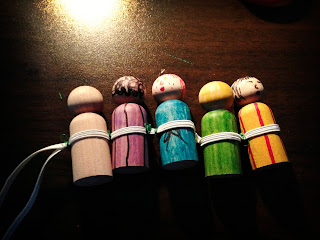 Then simply hot glue on a paper leaf of some sort and you have got your leaf coverings. Not exactly perfection but they work for how often we will be using them. Hope you enjoy! 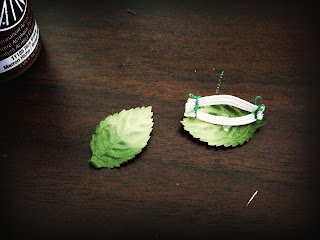 A wonderful sunburst of glory: How Princess Margaret, then just 14, described the ecstasy of VE Day