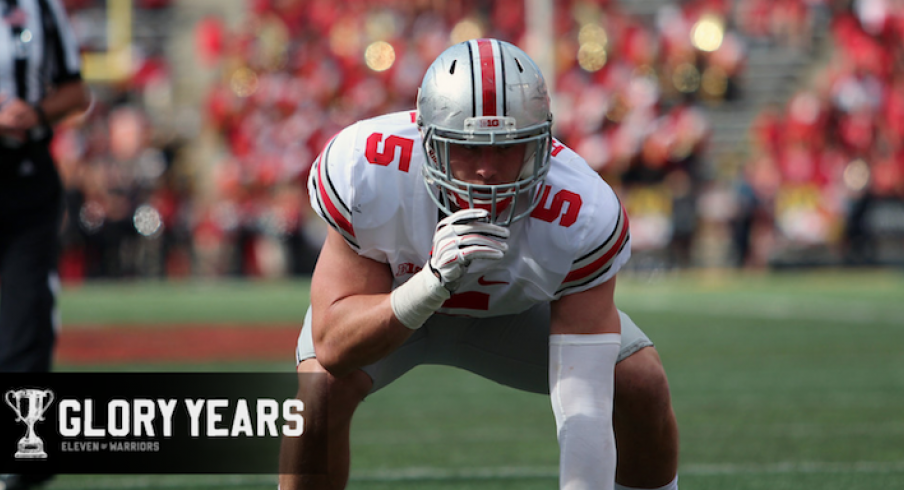 Similar to a number of other groups on the football field, the tight end position has changed as the game of football has evolved. As the ground-and-pound game of decades past has transformed into the air-raid offenses of today, tight ends acting as offensive linemen has given way to faster, agile pass-catchers that can create mismatches down the field.

In Ohio State’s history, tight ends have rarely been the most well-utilized offensive weapon on the offense. Despite this, the position group has had a number of bright spots over the course of the offense’s transformation. Using traditional statistics, we’ll take a look at some of the greatest tight end seasons in program history, spanning from the days of Woody Hayes to the modern offenses of Ryan Day.

Like our ratings of the other offensive position groups, we will use a nonparametric ranking system to determine the greatest season by a tight end in program history. We will use the same seven statistics we used for receivers, filtering for all tight ends with at least 10 receptions in a season dating back to 1952.

Each variable is weighted equally, helping us compare players from different eras. Altogether, the ranks were averaged out to find a composite ranking. The following outputs were determined to be the ten greatest seasons by a tight end in Ohio State history.

Joining just four other athletes as basketball-and-football players, John Lumpkin’s prevalence in Ohio State’s illustrious history is somewhat surprising. The Trotwood native recorded just 17 catches his senior year but possesses the highest yards per catch average of any tight end in program history (18.82 yards per catch) and averaged 4.67 more yards per catch than the team average, the second-highest mark in the position group’s history.

Lumpkin was primarily a blocker on Ohio State’s offense, which also possessed David Boston out wide. He started 19 games for the basketball team.

A consistent, four-year player, Jake Stoneburner is one of the most recognizable Ohio State tight ends in recent history. The 6-foot-3 Buckeye averaged nearly 17 yards per catch his redshirt senior season, the third-highest mark in program history.

The Dublin native finished the bowl-ban season with 269 yards and four touchdowns.

After winning a national championship as a sophomore in 1968, Jan White returned to Columbus his junior year as a star. He was one of the team’s 11 All-Big Ten selections the prior year and proved to be one of the best tight ends in program history in 1969, accounting for nearly 30% of the team’s total receiving touchdowns on a run-first team.

White is the only tight end in program history to have a tree in Buckeye Grove. He finished his career with 61 catches and eight touchdowns. He was selected to Ohio State’s All-Century team in 2000.

Ellis finished his career with 863 yards and 70 catches. He tragically passed away in 2018 after a battle with pancreatic cancer.

Heuerman was an All-Big Ten honorable mention following the 2013 season. He returned for his senior year and recorded over 200 yards in 2014.

Anders’ 1966 campaign was Woody Hayes’ most prolific passing season in his illustrious career.

A Pittsburgh native, John Frank entered his senior year with one of the best resumés of any tight end in program history. He already had 840 yards, which would have been second-best career mark for tight ends in Ohio State history at that time. In his senior year, Frank made sure to solidify himself in the record books, recording 641 yards (No. 2 in program history) with 45 receptions (tied third all-time with his 1981 season).

Frank finished his career with the most career receptions and receiving yards by a tight end in program history and was selected to Ohio State’s All-Century Team. He also attended medical school at Ohio State while playing in the NFL for five years, ultimately earning his medical degree in 1992.

The 6-foot-6 forward/tight end was drafted No. 9 overall in the 1996 NFL Draft. He also averaged over 13 points per game and 7.5 rebounds in his final year playing basketball.

After breaking records as a junior. Billy Anders returned as Hayes’ top option in the passing game. While the Bucks threw the ball less often in 1967, the senior had another fantastic campaign, catching three of Ohio State’s four receiving touchdowns that season, the best rate in program history, while recording over 52% of the team’s receiving yards, which is second only to his mark in the previous year.

Anders earned First-Team All-Big Ten honors following the season. He is second in career yards and catches for a tight end in program history.

An integral part of Ohio State’s first great passing offense, Bob Grimes’ senior year tops our list of the greatest seasons by a tight end in program history. Grimes no longer sits at the top of every record like he once did, but he has remained in the top five among tight ends in receiving touchdowns (No. 3, six TDs), percentage of a team’s receiving yards (No. 3, 31.24%), receiving yards (No. 5, 534 yards), percentage of a team’s receiving touchdowns (No. 4, 37.04%), and receptions (No. 5, 39 receptions).

Bob Grimes authored the receiving record books of Ohio State, finishing the season breaking every major single-game and single-season receiving record. He still holds the record for the most receiving yards by a tight end in a single game (187 yards), receiving touchdowns in a single game (four TDs, since tied by three other players), and single-game receptions by a tight end (12 receptions, since tied by Billy Anders) in program history.

The ‘unbelievable’ story continues for Joe Burrow, presumptive No. 1 pick in the NFL draft | LSU