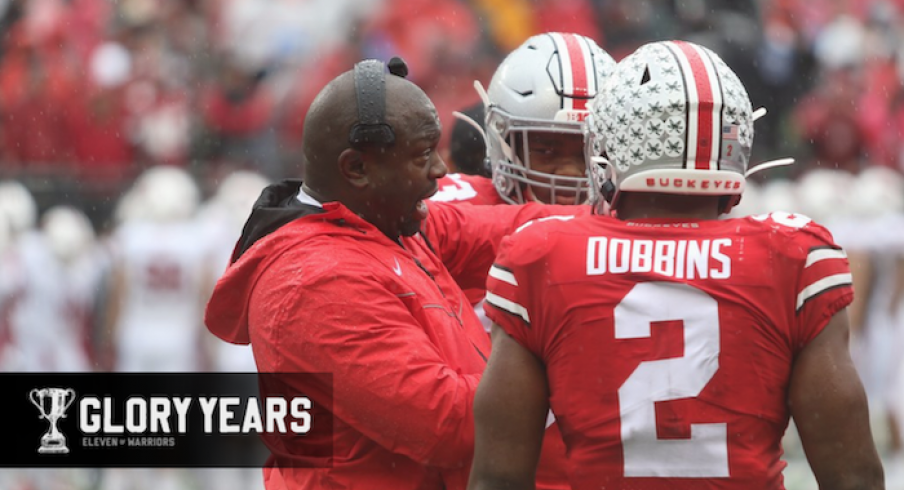 From Howard Cassady to J.K. Dobbins, Ohio State has produced some of the greatest running backs college football has ever seen. While we have already ranked the top rushing seasons in program history, the Buckeyes often have a number of great running backs at their disposal.

These groups may not be included in a single list as we have done in the past, prompting us to expand our rankings to determine the greatest rushing duo in Ohio State history.

Like our individual seasons’ rankings, we used a nonparametric approach to find the best rushing duo in program history. For each year, we used our previous rankings, which filtered out ballcarriers that did not have more than 30 attempts in a season, to determine the top two ballcarriers by the ranking system. Then, we used three box score statistics and two percentage-based statistics to rank each season.

While simpler than the individual rankings, it is easier to understand and avoids redundancy; finding the percent of total yards accounted for can prop up duos that had less-capable offenses while lowering teams that could be seen as a product of their era.

Altogether, the rankings of each of the five categories were averaged together to create a composite rating. The following outputs were determined to be the ten greatest seasons by a ball-carrying duo in Ohio State history.

While the 1998 team is best known for its wide receivers, Michael Wiley and Joe Montgomery were a formidable backfield duo. The unit averaged 6.33 yards per attempt in 1998, the sixth-best mark in program history, and accounted for 83.5% of the team’s rushing yards, the fourth-best mark in Ohio State history.

Carlos Snow and Scottie Graham had perhaps the most balanced attack in our top ten. Both backs reached the 900-yard threshold and the duo ranks in the top-15 in both percentages of scrimmage yards (40.2%) and rushing touchdowns (21 touchdowns).

Snow’s knee injury the following season kept him from repeating the duo’s success the following year, but the two backs did play together again in 1991. Snow is ranked No. 12 on Ohio State’s career rushing leaderboard with just under 3,000 yards.

In Art Schlichter’s senior year, Tim Spencer accompanied him in the backfield with fellow junior tailback Jim Gayle acting as a backup. The two juniors combined for over 84% of the team’s total rushing yards, the third-best mark in program history.

The first of Archie Griffin’s three appearances on our top ten, the sophomore’s first year as a full-time starter was a sign of things to come. Paired with quarterback Cornelius Greene, the duo’s rushing production accounted for over 50% of the team’s total yards, the sixth-best mark in Ohio State history.

The duo led Ohio State to an undefeated season in 1973 and Griffin finished fifth in Heisman voting.

A year removed from Spencer’s great junior season, the senior tailback followed it up with an even better final year. Now paired with fullback Vaughn Broadnax, who racked up over 500 rushing yards his junior season, the duo combined to score 23 touchdowns, tied for the eighth-best mark in program history, and run for over 2,000 yards.

Returning for their junior seasons, Archie Griffin and Cornelius Greene looked to earn their third-consecutive Rose Bowl appearance. Together, they compiled 2,537 rushing yards, the second-most in program history, with Griffin rushing for 1,695 yards, the sixth-best mark in program history.

Ohio State’s 1974 duo is the only running back-quarterback duo to crack the top 10 of our list. Greene won the Big Ten Most Valuable Player Award and earned All-American honors in 1975. He was inducted into the Ohio State Athletics Hall of Fame in 1998. Griffin won his first Heisman Trophy.

George, of course, won the 1995 Heisman trophy. He was later inducted into the Ohio State Athletics Hall of Fame and selected to Ohio State’s All-Century team. Pearson has the 11th-most career rushing yards in program history with 3,076 yards over four years.

In what may be a surprise to some, Ohio State’s 1984 duo of Keith Byars and John Wooldridge ranks as the best rushing duo in program history. The unit ranks in the top eight in four of our five categories, including third in touchdowns (26 touchdowns), fourth in yards (2,397 yards), sixth in percent of team’s total rushing yards (83.1%), and eighth in percentage of team’s total yards (46.0%).

Byars’ 1,764 yards was a school record at the time. He earned a tree in Buckeye Grove following his junior season and was selected to Ohio State’s All-Century team.

To God Be the Glory