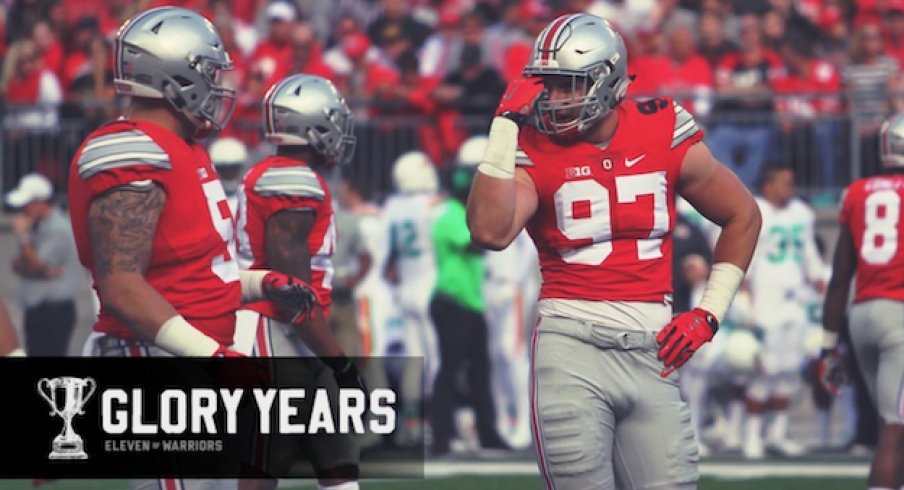 Since Larry Johnson’s arrival at Ohio State, the Buckeyes have consistently churned out some of the best defensive linemen college football has ever seen. With the Bosa brothers excelling in the NFL, Chase Young being selected No. 2 overall, and Zach Harrison looking to make a major jump next year, few can dispute that fact.

Ohio State’s legacy in the trenches, however, goes beyond just Larry Johnson. Since the 1960s, the Buckeyes have produced outstanding defensive lines. Today, we’ll try to rank the greatest defensive line units since 1970 by expanding on our previous Glory Years ratings.

Like our individual seasons’ rankings of the past, we used a nonparametric approach to find the best defensive line quartet in program history. For each year, we used our previous rankings to determine the top four linebackers by the ranking system. Then, we used four box score statistics and three percentage-based statistics to rank each season.

Altogether, the rankings of each of the seven categories were averaged together to create a composite rating. The following outputs were determined to be the ten greatest seasons by a defensive line unit in Ohio State history.

The foursome of Noah Spence, Joey Bosa, Michael Bennett, and Steve Miller led the Buckeyes to its first Big Ten title in the conference championship game era. The unit is fourth in sacks per game by a defensive line unit since 1970, averaging 1.82 quarterback takedowns per contest.

Two years removed from a consensus national championship, the defensive line grouping of Stan White, Jim Stillwagon, Shad Williams, and Mark Debevc led the Bucks to a No. 1 ranking before falling in the Rose Bowl. The quartet accounted for nearly 36% of the team’s total tackles and combined for over 30 tackles per game, the highest and third-highest marks, respectively, by a defensive line group in program history.

Debevc earned First Team All-Big Ten honors with Jim Stillwagon following the season. Stillwagon earned his second tree in Buckeye Grove after his senior season. He and the “Super Sophomores” ended their careers with a record of 27-2.

In the final year of Jim Tressel’s tenure at Ohio State, Cameron Hayward, Nathan Williams, John Simon, and Dexter Larimore controlled the trenches. The unit is sixth among big guys in sack percentage, accounting for over 65% of the team’s total sacks.

Coming off of the first national championship in the

College Football Playoff era, Tyquan Lewis, Joey Bosa, Sam Hubbard, and Tommy Schutt led the Buckeyes in a season lost to poor offensive coaching. The four linemen accounted for over 51% of the team’s tackles behind the line of scrimmage, the seventh-best mark in Ohio State history.

Bosa earned consensus All-American honors for the second year in a row following his junior season. He earned the Nagurski–Woodson Award in 2014. Lewis was named the Big Ten’s Defensive Lineman of the Year in 2016.

Led by Mike Vrabel and Andy Katzenmoyer, the 1996 Buckeyes possessed one of the best defenses in Ohio State history. The quartet of Vrabel, Matt Finkes, Luke Fickell, and Winfield Garnett averaged nearly four tackles for loss per game, the third-best mark in program history.

In John Cooper’s fifth season, the Buckeyes had one of the toughest defenses in the country, allowing the fourth-fewest points per game in the nation. The defensive line unit, consisting of Greg Smith, Dan Wilkinson, Jason Simmons, and Randall Brown, accounted for over 65% of the team’s sacks, the fifth-best mark in program history.

Simmons and Smith both earned All-Big Ten honors following the season. Wilkinson earned a tree in Buckeye Grove in 1993.

Coached by Woody Hayes, Bob Brudzinski, Aaron Brown, Nick Buonamici, and Eddie Beamon were one of the forces in the trenches in program history. The foursome ranks first in tackles per game (34.92 tackles per game) and fifth in chaos factor, which is a combination of forced fumbles and interceptions.

Even as one of the younger defensive lines on this list, the 1994 quartet of Matt Finkes, Mike Vrabel, Luke Fickell, Randall Brown ranks as the greatest group in program history. The group is not first in any one category, but places second in three (sack percentage, tackles for loss per game, sacks per game) and top-eight in two more (tackle for loss percentage, sack percentage).

What Is God’s Glory? | Daily Reflection

ALL Jolly Phonics songs in alphabetic order on Vimeo