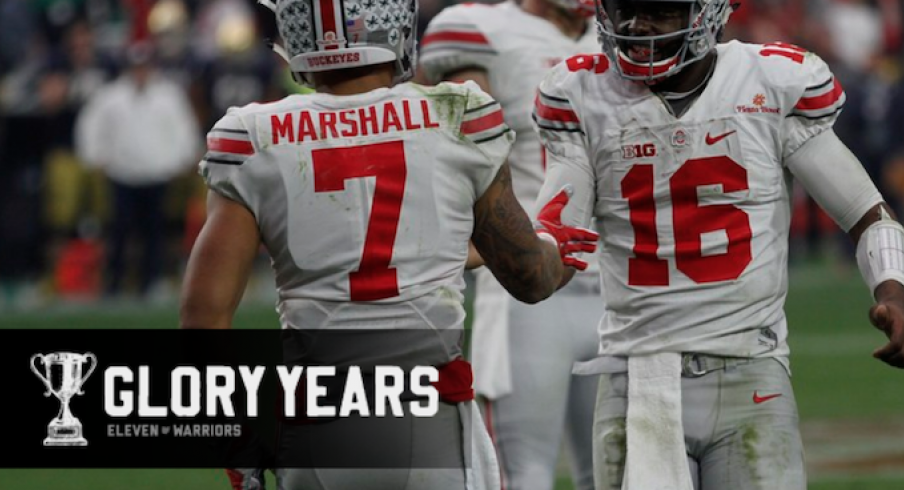 As the aerial attack becomes the name of the game, receivers are more important than ever. In the past, an offense could have a single superstar and wreck havoc on their opponents. Today, teams are more likely to possess a balanced receiving corps, relying on a number of players instead of one.

While we have already ranked the top individual seasons in Ohio State receiver history, some teams have followed this trend, opting for a balanced attack rather than relying on a single star. Because of this, we wanted to rank the greatest receiving corps in program history, taking the three best pass-catchers on each team and determining the best group in Buckeye history.

Like our individual seasons’ rankings, we used a nonparametric approach to find the best receiving corps in program history. For each year, we used our previous rankings, which filtered out receivers that did not have more than 10 catches in a season, to determine the top three pass-catchers by the ranking system. Then, we used four box score statistics to rank each season.

While simpler than the individual rankings, it is easier to understand and avoids redundancy; finding the percent of total receiving yards for a trio can lower teams that had multiple, capable receivers.

In the same breath, the number of receivers (three) was chosen for its simplicity for comparing across eras. While teams today employ four-wide and often have four or more receivers with sizable receiving totals, that was not always the case. Capping the total for each receiver at three allows us to compare starters against starters for over 60 years of data while making our ranking different from a simple comparison between total statistics for each team.

Altogether, the rankings of each of the four categories were averaged together to create a composite rating. The following outputs were determined to be the ten greatest seasons by a receiving corps in Ohio State history.

The trio of Ted Ginn Jr., Brian Robiskie, and Anthony Gonzalez made life easy for Troy Smith his senior year, helping him win the Heisman Trophy in 2006. Ginn led the group in receiving, racking up 781 yards with 59 receptions and nine touchdowns. The three combined for 1,898 yards, good for the 10th-best mark for a trio in program history, and 139 receptions, the fifth-best mark in Ohio State history.

With Braxton Miller in his final year under center, Corey Brown, Jeff Heuerman, and Devin Smith proved to be a versatile group. Brown recorded 771 yards, leading the team, while the other two added 660 yards and 466 yards, respectively. Their combined 22 receiving touchdowns rank seventh among trios in program history.

Led by the two-headed monster of Dane Sanzenbacher and Devier Posey, the duo is joined by running back Brandon Saine, giving quarterback Terrelle Pryor options all over the field. Sanzenbacher, whose season is the ninth-best in program history, led the team with 948 yards, 55 receptions, and 11 touchdowns while Posey added 848 yards, 53 receptions, and seven touchdowns. The trio ranks in the top ten in receptions (T-No. 9), yards (No. 8), and touchdowns (No. 5).

If more receivers were added to the equation, this group would almost certainly rank higher as Austin Mack and Garrett Wilson both qualified for the initial cut but were left on the outside looking in. The 2019 team is one of four in program history with four receivers with at least 400 yards.

Before Troy Smith was Troy Smith, the group of Santonio Holmes, Ted Ginn Jr., and Anthony Gonzalez helped the junior quarterback take a huge step in 2005. Holmes and Ginn both ended the season with more than 800 yards while the trio combined for 2,153 yards and averaged over 16 yards per catch.

Like the 2019 squad, this team’s receivers would almost certainly rank higher if more pass-catchers were added to the equation. In 2018’s case, K.J. Hill is an incredibly notable exclusion; the all-time leader in receptions had 885 yards, 70 catches, and six touchdowns his redshirt junior year. Binjimen Victor and Austin Mack were also left out of the equation. 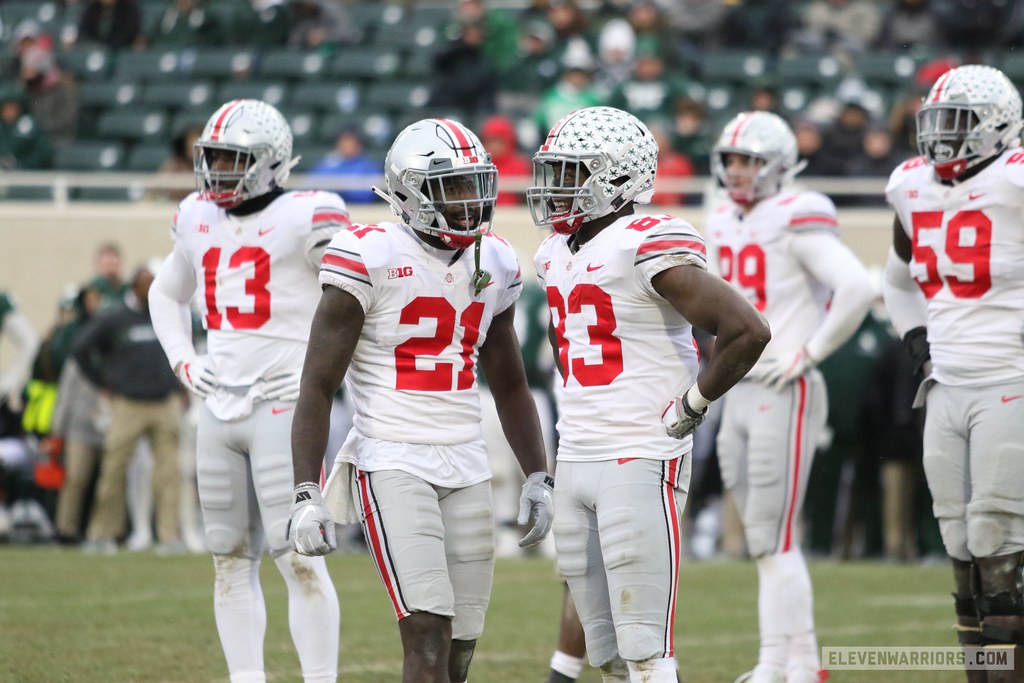 The 2018 team is the only one in program history to have four receivers with 500+ yards. Campbell earned First Team All-Big Ten honors following his senior season. His 1,063 yards for the season was just the fifth-1,000 yard season in program history.

With the frightening duo of David Boston and Dee Miller on the outside, tight end John Lumpkin occupies the third spot of the group for the 1997 team. The two wide receivers each recorded over 900 yards, one of only two duos to accomplish such a feat in program history, while Lumpkin averaged the most yards per catch on the team amongst qualified receivers. The trio combined for 2,271 yards and 148 catches, the third-best mark in program history.

Lumpkin’s 1997 campaign ranks as the 10th-greatest season by a tight end in program history. All three returned for the 1998 season as Ohio State opened the year ranked No. 1.

None of the receivers earned any postseason honors, other than a Big Ten championship and the first title in the College Football Playoff era.

Arguably the greatest receiver tandem in program history, David Boston and Dee Miller followed up their historic 1997 campaign with more of the same in 1998. David Boston recorded a program-record 1,435 yards while Dee Miller crossed the 900-yard threshold once again. The group, joined again by John Lumpkin, finished with the most yards for a trio in program history (2,628 yards) and second-most receptions (161 receptions).

Boston is Ohio State’s career leader in receiving yards and touchdowns and was named to Ohio State’s All-Century Team. Lumpkin declared for the NFL Draft following the year and was drafted ninth overall.

Glenn’s season ranks as the greatest receiver season in program history. He was a unanimous All-American and was awarded the Fred Biletnikoff Award.