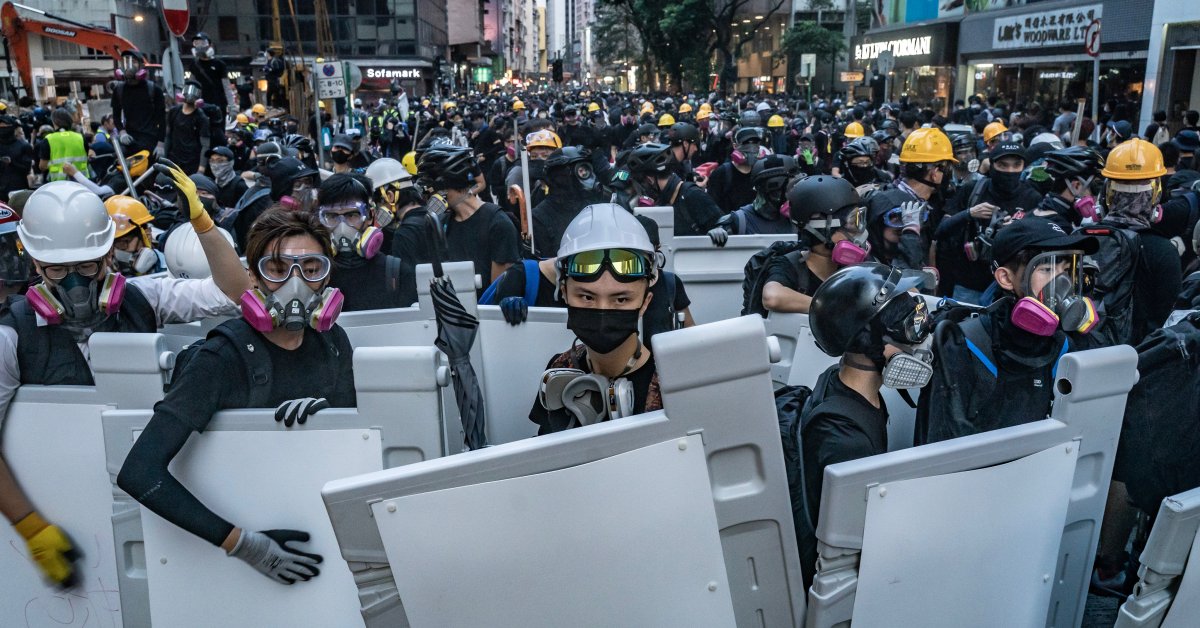 Hong Kong’s protestors want greater autonomy from mainland China, a grievance they’re expressing through a song some are calling their new “national anthem.”

“Glory to Hong Kong” has spread like wildfire: on a quiet Monday night, hundreds of people spread out across four floors of a suburban shopping mall to sing it. The song has been watched on YouTube over a million times, and at least half a dozen English translations, and a Japanese iteration, have surfaced.

The composer is Thomas, a full-time musician in his mid-twenties who asked to be identified only by his first name. He says he recruited performers, as well as people to help with the mixing and arrangement, on Hong Kong’s Reddit-like forum LIHKG, after sharing a demo version last month.

“Music is a tool for unity,” he tells TIME. “I really felt like we needed a song to unite us and boost our morale.”

While he wrote the first draft of the lyrics, LIHKG users contributed suggestions in a thread that was upvoted more than a thousand times. One of them was the incorporation of “Reclaim Hong Kong, revolution of our time,” which has become one of the most commonly chanted phrases at pro-democracy protests.

“The message to listeners is that despite the unhappiness and uncertainty of our time, Hong Kong people will not surrender,” the composer says.

Protesters sing songs and shout slogans as they gather at Cityplaza shopping center after business hours in Hong Kong on Sep. 9, 2019.

He adds that he wrote the song as a protest march and that listeners are free to interpret it in any way they want to — including as a “national anthem,” as many have called it. While some protestors don’t agree with the label due to its implications with the controversial idea of separatism, all believe the song reflects the trials and tribulations of the now three months-long movement.

“K,” a 23-year-old who responded to Thomas’ online call for volunteers, helped with the song’s mixing. “I think it’s an honor to join the production of a song so many people like,” he says.

Weeknight after weeknight, protestors have been gathering in the hundreds at shopping malls across the city to sing the song. Some bring their own instruments — violins and flutes for example — to lead the crowd. On Wednesday, a music video showing an orchestra of performers wearing yellow helmets, goggles and black masks was uploaded to YouTube, and garnered over 800,000 views.

It’s not the first song to be taken up during Hong Kong’s anti-government demonstrations. At the start of the current wave of protests, Christians and non-Christians alike would break into choruses of “Sing Hallelujah to the Lord” during peaceful gatherings and tense police stand-offs.

“Do You Hear the People Sing,” from Les Miserables, commonly sung during the 2014 Umbrella Revolution, also continues to be intoned today. Last week, students at a high school sang the Broadway tune over the Chinese national anthem, as seen in a video widely shared on social media.

But no other song has gained the traction that “Glory to Hong Kong” has.

Get The Brief. Sign up to receive the top stories you need to know right now.

“The song gives me a very strong sense of belonging to Hong Kong,” says Calvin, a 18-year-old protestor. ” It summarizes our hopes, our targets, our ambitions.”