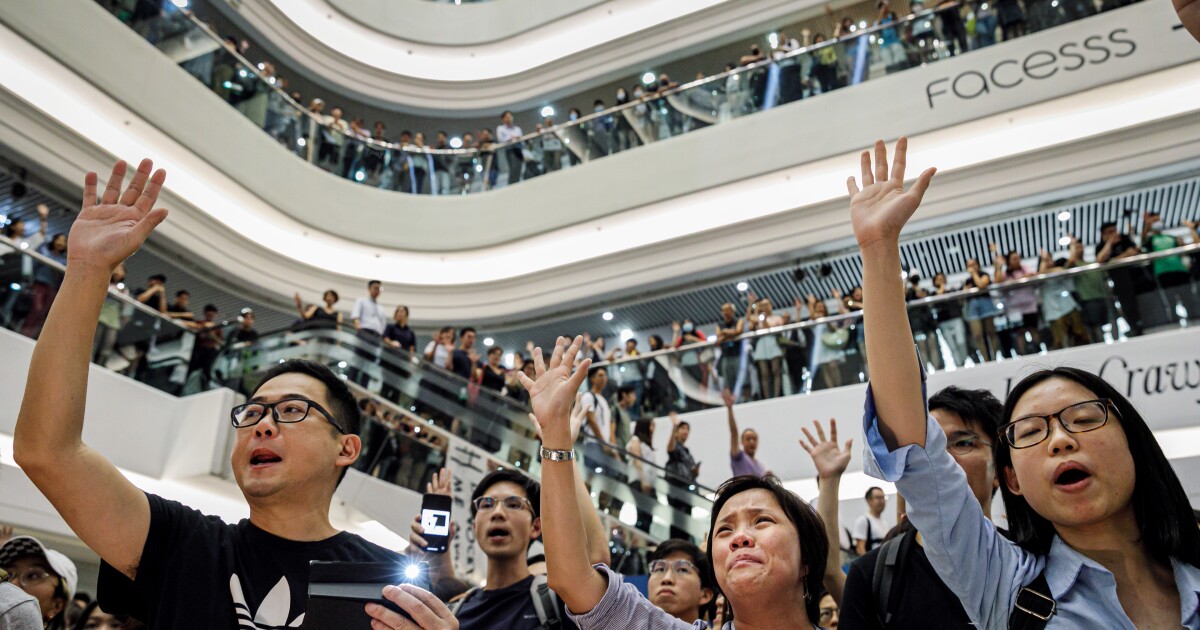 It began with a few notes of warbling violin. A man with a harmonica and a backward baseball cap joined in. And then hundreds of voices joined in song Friday at Hong Kong’s Science Park, in one of the dozens of singing sessions belting out across the city.

But it was not just any song.

The composition, “Glory to Hong Kong,” written only three weeks ago by a composer identified only as “Thomas dgx yhl,” has ignited Hong Kong’s protest movement.

People, including the elderly and families with children, crowded into shopping malls across the city Friday, spontaneously singing the protest anthem that everyone suddenly seems to know by heart. Angus Wong, age 6, was at one mall with his parents, singing along, or trying to.

Some shed tears as they sang, in Cantonese: “Pray for democracy, for freedom eternal, for the glory to come back to Hong Kong!”

At the upscale IFC mall, a 28-year-old who gave his name only as Charlie played a grand piano at the heart of a singing crowd. He skipped work at a nearby office to join the gathering.

Protesters sang it at a solemn vigil Friday outside the Legislative Council to honor nine people who have died in the course of the protests, most by suicide.

Several hundred people gathered outside a maximum-security detention facility, Lai Chi Kok Reception Center, around 10:30 p.m. Friday to sing it, accompanied by a woman playing a recorder, in solidarity with pro-democracy activists being held there.

As a misty full moon rose, people climbed Hong Kong’s two iconic peaks, Lion Rock and Victoria Peak, where they sang the anthem over and over, shining green and blue lasers into the night sky and holding golden paper lanterns for the Mid-Autumn Festival, interspersed with slogans such as “Liberate Hong Kong.”

Some participants on Telegram, a social media app that is being used as a sounding board for the protest movement, are calling it a “national anthem.” As pro-democracy protests roll on, that is a view likely to sound alarm bells in Beijing, which is confronting its worst crisis since it took Hong Kong back from Britain in 1997.

Under China’s “one country, two systems” policy, Hong Kong is part of China but the right to protest, an independent judiciary, and press freedom are supposed to be protected.

Dozens of versions of the song have proliferated on Telegram channels and YouTube.

The original version, posted Aug. 31, shows video of riot police and protesters clashing, demonstrators marching with arms locked and crowds thronging the city’s streets or holding hands in human chains. It ends in a challenge to Beijing, with a black-clad protester running the Chinese flag down a flagpole and running up a protest flag.

An orchestra, clad in the black clothing, goggles, masks and hard hats used as protective gear by Hong Kong protesters, uploaded its version of the song Wednesday in a video viewed more than 1.2 million times. It begins with a thrumming drum roll, before the camera reveals a singing choir, only their eyes visible, then drifts across the brass, wind and stringed instruments, and zooms down for a clash of cymbals. By the end, rising gas resembling smoke engulfs the orchestra, symbolizing the tear gas fired by riot police during protests.

In a dirge-like version, a young man plays the song solo on an acoustic guitar. There’s a sign language version too. 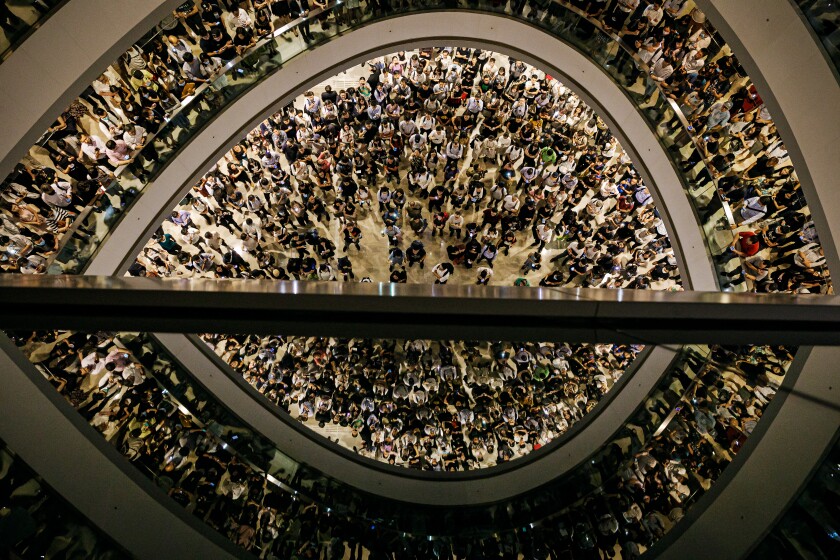 People gather for chants and a singalong at the IFC Mall in Hong Kong.

The song is an example of the persistence and creativity of the leaderless Hong Kong protest movement, which has nimbly outmaneuvered Beijing and Hong Kong authorities. It moves so quickly that it often makes the stern editorializing of Chinese state media appear desiccated and out of touch.

The popularity of “Glory to Hong Kong” contrasts with the Chinese national anthem, which is increasingly unpopular in Hong Kong and tends to be booed.

China’s National People’s Congress Standing Committee added a clause to Hong Kong’s Basic Law in 2017 making it an offense to insult the national anthem or flag. Hong Kong’s government introduced a bill in January making this a criminal offense punishable with up to three years in jail.

“Glory to Hong Kong” contains a call to arms, urging people to sacrifice and shed their blood, sweat and tears for Hong Kong’s freedom. 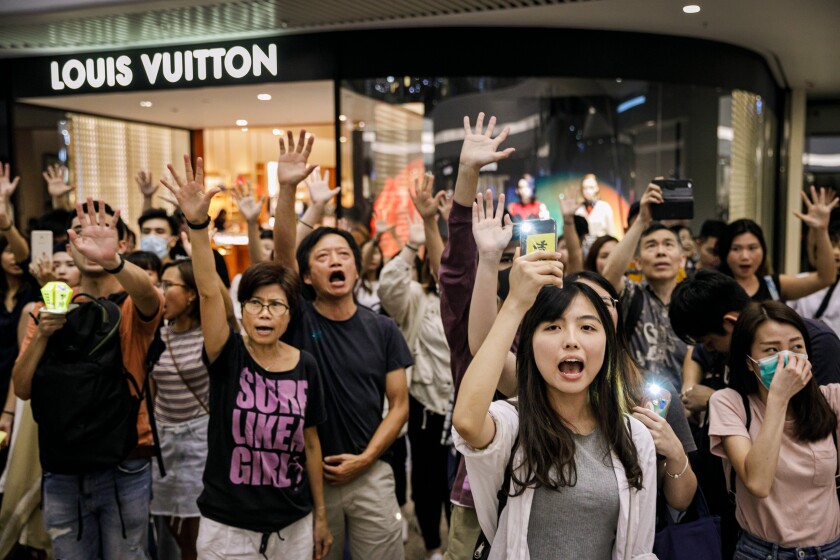 The song’s composer calls it a march, according to comments attributed to him on the independent Hong Kong online media site Apple Daily, and says he is not afraid of repercussions from the authorities.

“If you have to worry about being punished for singing a song that gives voice to the beliefs of masses of people, it only shows that the government itself is in deep trouble,” he said, according to the outlet.

Hong Kong’s protest movement erupted several months ago over a legislative bill that would have allowed extradition to mainland China. It persisted through the summer with peaceful mass marches, but also increasingly violent clashes between riot police and protesters.

The demands expanded to include universal suffrage, an independent inquiry into police violence, an end to authorities defining the protests as riots, and the dropping of charges against arrested protesters, many of whom face lengthy jail terms. Hong Kong leader Carrie Lam withdrew the extradition bill last week, but did not entertain other demands.

This year’s protest movement has had several theme songs and many inspirations. Earlier this summer, protesters often sang “Do You Hear the People Sing?” from the musical “Les Miserables.” They also sang the hymn “Sing Hallelujah to the Lord.”

But “Glory To Hong Kong” has had a more indigenous, electric, unifying effect. Its composer took suggestions on changes to the lyrics from participants in an online forum and has invited people to create their own versions. Pino Tong cries Sept. 11 as she and others pay respects to those injured in a clash with police in Hong Kong.

There are many translations of the song. New Zealand-based China Heritage, an independent academy that studies Chinese language, history, politics and culture, offered a version, which runs in part:

“Let us march together for what is right!

“This is the revolution of our times!”

“I have always felt jealous when I saw people from other country being very emotional and proud when their national anthems were played. Now I finally have a taste of it,” said one Twitter user Friday with the handle TimC_HK.

“Impossible to watch this & not be moved. Bear in mind this song did not exist a few weeks ago, was crowd-sourced/workshopped online, released & now everyone knows it & is singing it at gatherings from shopping malls to football matches. Powerful stuff,” tweeted Anthony Dapiran, author of a book on Hong Kong protests, “City of Protest.”

Dapiran argues that Hong Kong’s protest moment has created “moments of enchantment,” that maintained the movement’s energy, and blunted the “crude propaganda and economic bribes” deployed by the Beijing and Hong Kong governments.

The popularity of the protest anthem has seen pro-Beijing groups stage their own events singing the Chinese national anthem in shopping malls. But on Thursday at the upscale IFC mall, pro-Beijing singers with red flags were soon outnumbered by those singing “Glory to Hong Kong.”

As Hong Kong authorities harden their approach, the moderate mainstream elements of the protest movement have had to show imagination on how to express their views, with authorities repeatedly denying applications to stage legal peaceful protest marches.

Police Friday refused to lift a ban on a march Sunday organized by the Civil Human Rights Front, although the group advocates peaceful protest and has successfully led numerous peaceful mass rallies attracting a broad spectrum of Hong Kongers.

Often, the mood in Hong Kong’s protest movement, challenging a powerful authoritarian state, is grim. Many fear a violent end to the movement. Some worry about being killed or disabled by riot police, even as they plan their next protest event. Others see conspiracy and ill will everywhere, from the police to the government to the public transport authority.

But the singing created a moment of optimism.

“You know the most beautiful thing about this whole experience? I feel like we are witnessing the birth of a nation,” said one Telegram user, going only by ‘S.’ “Anthem, flag, solidarity, national identity.”

Yam reported from Hong Kong and Dixon from Beijing.