So far we have seen the Glory of  Vijayanagara,  it’s  literary accomplishments,  and the zenith it reached under Sri Krishna Deva Raya. In this post we shall be looking at the architectural style of  Vijayanagara, which had it’s own unique features and styles.  Matter of fact the Vijayanagara  School of  Architecture, freely borrowed from various styles- Hoysalas, Chalukyas, Pandyas, Cholas, and also incorportated elements of Islamic architecture like domes, vaults and arches. The architecture was also in keeping the local conditions and topography in mind. With Hampi being a rocky surface, monolothic rock carvings, use of granite was pretty much common.  Also with the empire under constant threat of invasions, architects preferred granite, that was not too easy to destroy. While the use of granite was a feature of earlier  Badami Chalukya styles, the Hoysala, Western Chalukya tradition of using soapstone, was implemented in some of the sculptures and buildings.

Most of the temples of this era, were surrounded by enclosures, the smallest of the lot, had a garba griha( sanctum sanctorum) and the porch. Somewhat larger temples  had the Garba Griha, an ante chamber called Sukanashi, a Navranga or a sort of corridor connecting the Garba Griha with the outermost Mandapa. And a Rangamantapa, which was an enclosed pillared hall used for dances, meetings.

The Balakrishna Temple at Hampi with the garba griha and mantapa, employs typical Vijayanagara Style.

The much larger temples had a Raya Gopuram, basically a tall Gopuram, with the Raya prefix to indicate it was built by Vijayanagara rulers, and this was often crowned by a shala shikara,a barrel laid sideways.  The gopuram was richly decorated with sculptures of Gods, Goddesses, men and women.

One of most famous Raya Gopurams at the Virupaksha Temple.

The more Dravidian style  became popular during reign of  Sri Krishna Deva Raya, and some of the famous Rayagopurams, include the Chennakesava Temple at Belur and the temple at Srisailam. There was also the regular Pradakshina patha for devotees to go around the temple, an open Mahamantapa, a Kalyanamantapa and a temple tank. 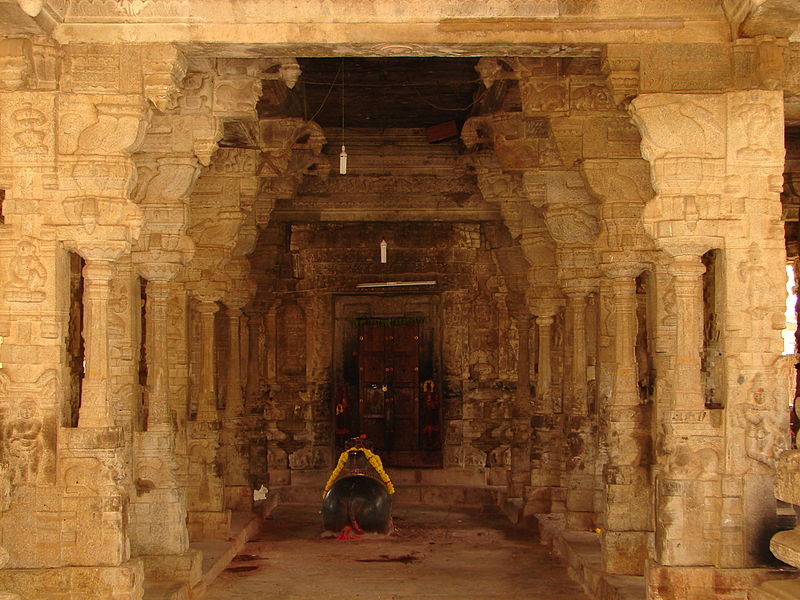 Most of the Temple pillars, had  Yalis, basically hippogryphs depicting charging horses with their fore legs lifted.  On the other side, the pillars were richly carved with themes from Hindu mythology.Some other pillars had a cluster of smaller pillars around them too. 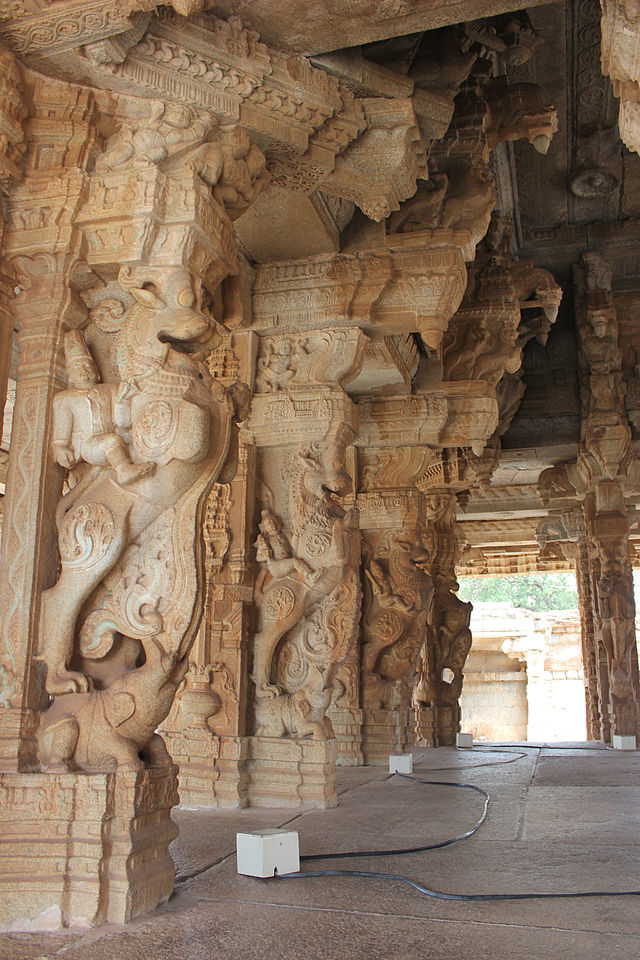 Another Mantapa with horse pillars at Hampi.

The Mantapas were built on square plinths or polygonal ones, with 4-5 feet high carved friezes, and ornate stepped entrances on all sides,  with miniature elephants. The 1000 pillar Mantapa  with large halls, supported by ornate pillars was one of the most popular styles. 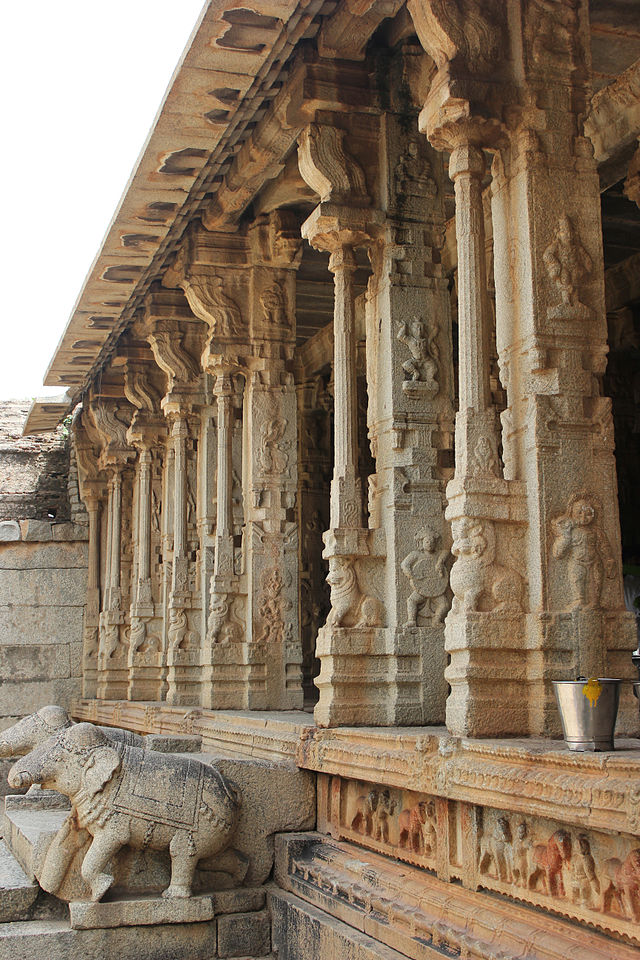 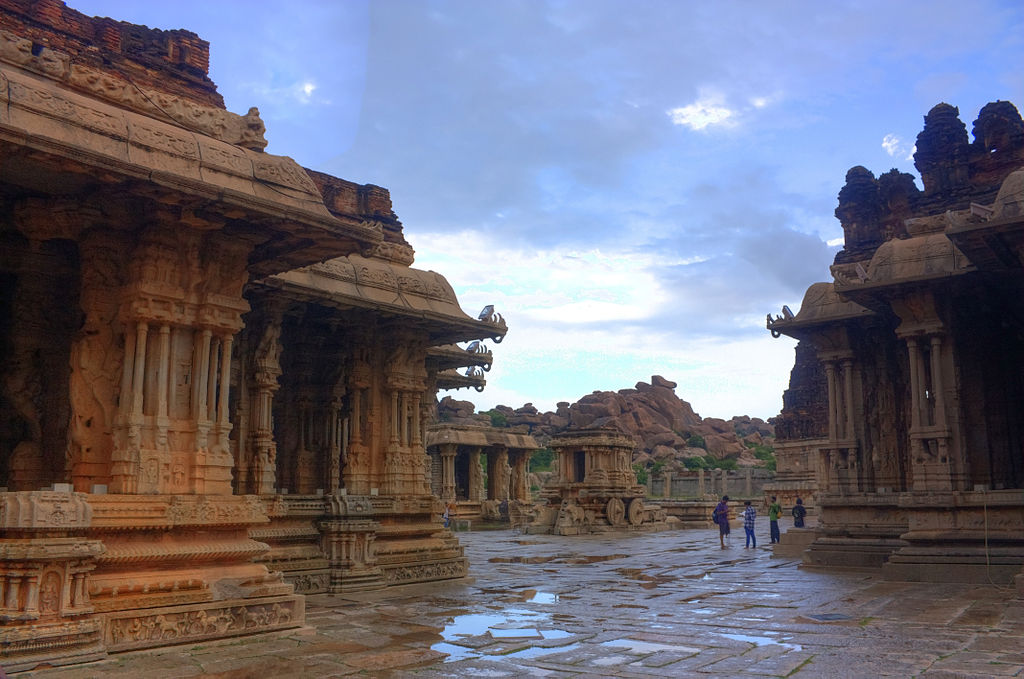 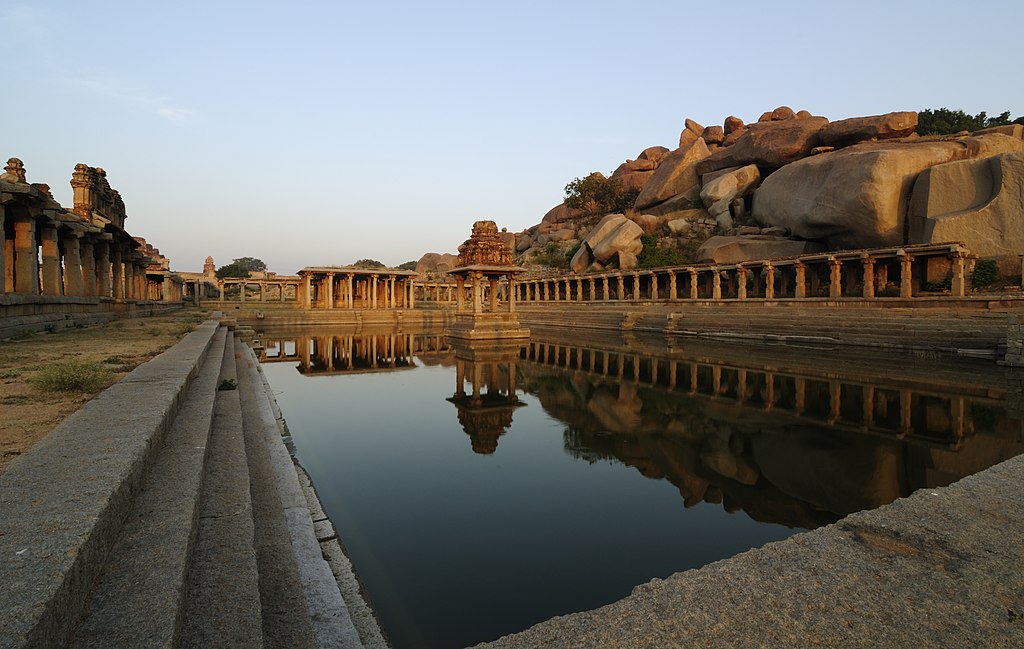 Recent excavations have also shown up the presence of stepped tanks, or pushkarnis in the temples in Vijayanagara, consisting of chlorite slabs, arranged in a symmetrical formation, with steps and landings descending to water on all sides. The influence here is clearly from Western Chalukya, Hoysala era.

Palace buildings in Vijayanagara generally face east or north,  and a very intricate system of doorways, passages leading through  a sequence of courts characterize these structures.  Much larger palaces have side extensions, and most of them are built on raised platforms made of granite.  Again like the temples, these platforms are highly ornate, with multiple tiers of decorated friezes and mouldings. The sculptures on these palace platforms are primarily those of animals, demonic faces, floral.  Pillars, beams were made of wood,  while the roof was made of brick lime or concrete, and copper, ivory was used for the finials. Multiple levels with each flight of stairs, decorated by balustrades with Yali or elephant sculptures characterized most of the palaces.  The water tanks too had spouts which were decorative in nature.  Unlike the temples which primarily were of Dravidian style,  the palaces adopted many Islamic style features too, primarily use of arches, domes. 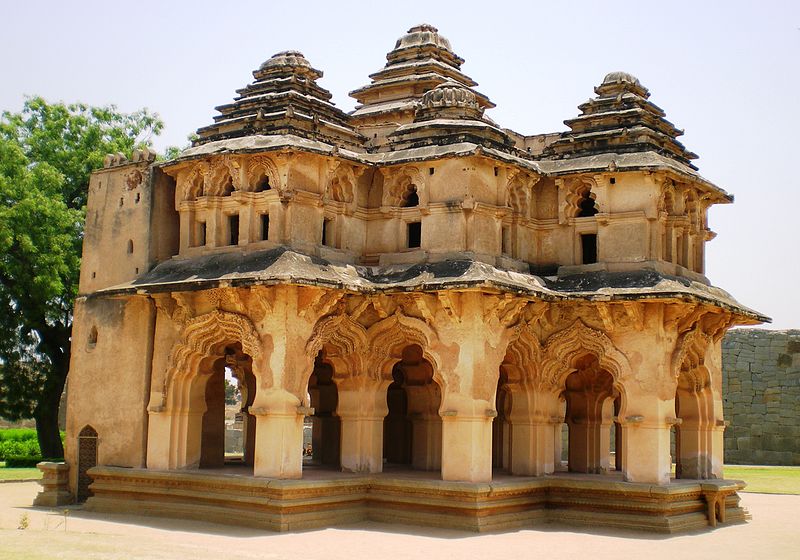 Elephant Stables at Hampi, that have adopted many Islamic styles too,primarily high arches and domes.

Nothing better sums up Vijayanagara’s  glory than these excerpts by foreign travellers.

The city is such that eye has not seen nor ear heard of any place resembling it upon earth”, says Abdur-Razzak from Central Asia. There were arcades and magnificent galleries for the bazaars, and rising above them all was the palace of the king surrounded by “many rivulets and streams flowing through channels of cut stone, polished and even.” The whole city was full of gardens, and because of them, as an Italian visitor in 1420, Nicolo Conti, writes, the circumference of the city was sixty miles. A later visitor was Paes, a Portuguese who came in 1522 after having visited the Italian cities of the Renaissance. The city of Vijayanagar, he says, is as “large as Rome and very beautiful to the sight”; it is full of charm and wonder with its innumerable lakes and waterways and fruit gardens. It is “the best-provided city in the world” and “everything abounds.” The chambers of the palace were a mass of ivory, with roses and lotuses carved in ivory at the top–“it is so rich and beautiful that you would hardly find anywhere, another such.”

“The massive walls, which can still be traced, enclosed an area of more than sixty square miles, much of which was occupied by fields and gardens watered by canals from the river. The population cannot be estimated with precision, but it was certainly very large when judged by the standards of the fifteenth century. The great majority of the houses were naturally small and undistinguished, but among them were scattered palaces, temples, public buildings, wide streets of shops shaded by trees, busy markets, and all the equipment of a great and wealthy city. The principal buildings were constructed in the regular Hindu style, covered with ornamental carving, and the fragments which have survived suffice to give point to the enthusiastic admiration of the men who saw the city in the days of its magnificence

Gloria Vanderbilt told Anderson Cooper not to expect a trust fund. He got the estate instead