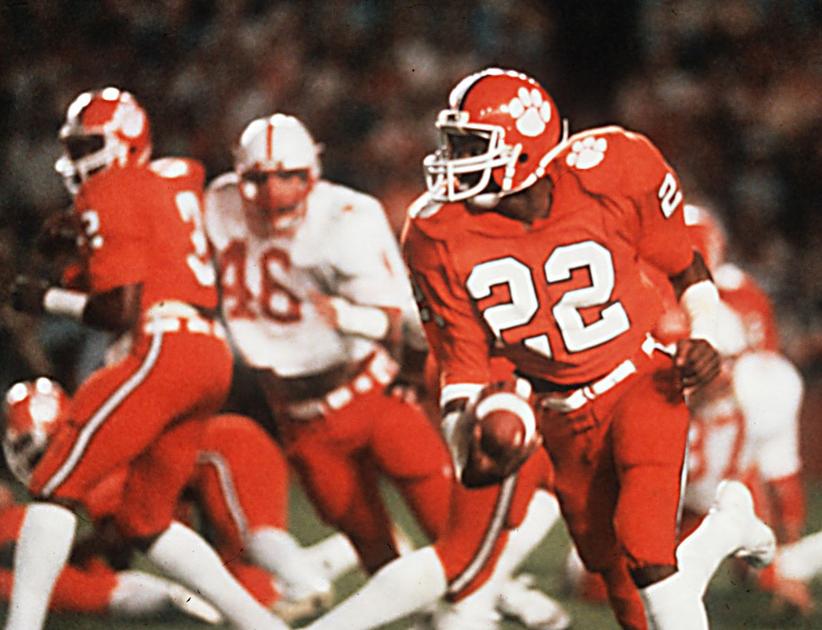 National championships? Sure, and the Palmetto State has been well represented.

High-profile upsets? Of course, with contributions from Conway to Rock Hill to Spartanburg.

But ranking the 25 biggest games in South Carolina sports history also means factoring in the impact of glory.

The rules: Games played in South Carolina or involving a state team.

The top 25: 12 schools or professional teams are represented with game dates ranging from 1953 to 2019 and including at least one game from each of the last seven decades.

Clemson head football coach Danny Ford is carried off the field after the Tigers defeated Nebraska for the national championship in the 1982 Orange Bowl. Provided/Clemson athletics

Clemson’s 1981 football national championship. Danny Ford’s Tigers at the Orange Bowl on Jan. 1, 1982, capped an undefeated season with a 22-15 victory over Nebraska. That made Clemson fans think the program was permanently elite.

It took NCAA probations, frustration and 35 years until Deshaun Watson and Co. realized the dream again. But will was instilled.

Hank Aaron’s 1953 appearance in a minor league baseball game in Columbia. Aaron, before becoming baseball’s home run king, joined with Jacksonville Braves teammates Felix Mantilla and Horace Garner to break the color barrier in the South Atlantic League, which included a series against the Columbia Reds that started on April 21 (Jacksonville later came to play the Charleston Rebels).

It’s not so much that Aaron went 3-for-4 with a home run in a 7-5 Braves win; that was typical of a slugger 12 of the 16 journalists covering the SAL that year would select as league MVP. It’s that this was integrated baseball almost two decades before a black athlete played for South Carolina or Clemson (Hall of Famer Frank Robinson played for Columbia in 1954 and 1955), and big crowds showed up. It was a positive shock to the state’s system of Jim Crow politics, an example of what needed to be done.

Clemson’s Nov. 29, 2008, victory over South Carolina at Death Valley. An interim head coach named Dabo Swinney might not have needed the 31-14 win to get the job full-time but, as athletic director Terry Don Phillips said later, “It certainly helped, there’s no question about it.”

A loss might have made Swinney a tough sell for Phillips, his primary advocate. Or tilted the cards when Swinney considered himself on the hot seat after a 6-7 finish in 2010. Instead, the Swinney Era officially began a few days later, laying the foundation for the most dominant stretch for a major college sports program in South Carolina history.

South Carolina’s 2-1 win over UCLA in 11 innings to win the 2010 College World Series on June 29. The Gamecocks, led by such stars as Michael Roth and Whit Merrifield, would win 22 straight postseason games, including a 2011 College World Series title and 2012 runner-up status.

Consider the ripples. Steve Spurrier often credited the baseball team for inspiring what became the greatest football success in school history. That included a five-game win streak against Clemson that added a layer of resolve within Dabo Swinney’s powerhouse construction.

Clemson’s 2016 football national championship victory over Alabama with Hunter Renfrow catching a touchdown pass from Watson for a 35-31 win on Jan. 9, 2017.

Willie Jeffries set many records and broke barriers while at S.C. State, where his 1976 team beat Norfolk State in the Bi-Centennial Bowl. Staff/File

It made S.C. State the “Black National Champion.” It helped Jeffries get the Wichita State job in 1979, when he became the first black head coach at a non-HBCU NCAA Division I-A (now FBS) school.

McKissick, who died in November, retired in 2015 with 621 victories over 63 seasons.

Clemson’s Trevor Lawrence-led 44-16 romp over Alabama for the 2018 football national championship on Jan. 7, 2019, in Santa Clara, Calif. It’s the most lopsided loss of Saban’s glorious Alabama era. It was the big stage.

It stands as the most impressive team performance in a single game in South Carolina major sports history.

It solidified head coach Dawn Staley as an international basketball leader with social and political power beyond the sport.

The highlight of Frank McGuire’s 16-season run in Columbia, this was the first ticket to the NCAA Tournament for a Palmetto State school and answered a heartbreaking 42-39 loss to N.C. State in double-overtime of the 1970 ACC Tournament final.

Coastal Carolina players celebrate their 4-3 victory over Arizona to win the championship in Game 3 of the College World Series in Omaha, Neb., Thursday, June

Coastal Carolina’s 2016 College World Series title, capped by a 4-3 victory over Arizona in Game 3 of the finals on June 30, was perhaps the most stunning in Omaha history.

Gary Gilmore’s Chanticleers leaned hard on pitcher Andrew Beckwith in Omaha on their way out of the Big South Conference. They came back with back-to-back, one-run wins after losing Game 1 of the championship series.

Channeling Frank McGuire’s Big Apple connection, and some Gamecock fans say it’s the top athletic accomplishment the school has ever had.

South Carolina players pose with the trophy as they celebrate after beating Florida 5-2 in Game 2 of the 2011 College World Series best-of-three finals, to win the championship, in Omaha, Neb., Tuesday, June 28, 2011. Eric Francis/AP

But the Panthers’ first regular-season game ushered in new interest in the NFL among kids and others in South Carolina, boosted by a Wofford College training camp (now set to move to Rock Hill). The Panthers played all of their 1995 home games at Clemson after Mike McGee, in one of his few mistakes as South Carolina’s most productive athletic director, rejected team interest in Williams-Brice Stadium.

The Citadel advanced to the College World Series with a 4-1 victory over host Miami in the Coral Gables regional on May 29, 1990.

The College of Charleston’s 75-66 basketball victory over Maryland in the NCAA Tournament on March 13, 1997. John Kresse’s Cougars also won the 1983 NAIA national title but this win in Memphis had more implications, letting programs such as Winthrop (with former College of Charleston assistant coach Gregg Marshall at the helm) and Wofford in on the possibilities.

South Carolina’s 31-17 win over No. 6 Clemson on Nov. 30, 2013, in Columbia was the fifth straight in the football series. It’s the game most symbolic of Steve Spurrier’s school-best stretch of three 11-2 seasons preceded by a 2010 SEC Championship Game appearance.

And it made Clemson mad.

It was the first Carolina-Clemson game played at Clemson, ending the Big Thursday tradition in Columbia with a conventional home-and-home rotation.

Furman’s 17-12 victory over Georgia Southern in the 1988 Division I-AA (now FCS) national championship game on Dec. 17 at Pocatello, Idaho. It capped a 13-2 season for Jimmy Satterfield’s team, which included a respectable 23-3 loss to a Clemson bunch that went 10-2.

Maybe it doesn’t look like much now, a minor bowl win at the end of a 7-5 season. But the Gamecocks arrived in Miami with an 0-8 bowl record. Quarterback Steve Taneyhill helped head coach Brad Scott take a huge burden off the program’s aching shoulders.

The scoreboard at Williams-Brice Stadium reflects The Citadel’s 38-35 upset of South Carolina in 1990. Photo provided/The Citadel

The Citadel’s 38-35 football upset at South Carolina on Oct. 20, 1990, a highlight among upsets pulled under the late Charlie Taaffe, the winningest coach in Bulldogs history (other victims included Arkansas, Navy twice and Army twice).

Sparky Woods’ not-so-bad Gamecocks went 6-5 that season as an independent.

Quarterback Stephen Garcia played the game of his life, thanks in part to Alshon Jeffery and Marcus Lattimore, and the Gamecocks went on to win the SEC East.

It remains Clemson’s lone ACC title of any kind in men’s basketball.

The Gamecocks went on to beat Clemson, reach their first bowl game in 24 years and finish 7-4.

Polanski’s ‘An Officer And A Spy’ Among Leaders – List – Deadline