What is so special about the Bhagavad-gita? What are the benefits of reciting this Vedic literature? Find out the answers here.

Bhagavad Gita is also known as Gitopanishad. It is the essence of all Vedic knowledge and one of the most important Upanishads in Vedic literature.

Bhagavad Gita was spoken directly by the Supreme Lord Sri Krishna. If one reads Bhagavad-gita regularly and attentively, he can surpass the study of all Vedic literatures. In this age, it is very difficult to perform sacrifices recommended in Vedic scriptures; also, there are lot of hurdles to take up vows; austerities and penances are difficult to perform; and people are not very much charitably disposed. But still one can satisfy the Supreme Lord by a devotional recitation of Gita. The study of all Vedas, Puranas and Itihasas are completed in all respects if one studies just this one book.

The scriptures recommend that Bhagavad Gita should be chanted during the performance of sraddha ceremonies. The sraddha ceremony is performed to satisfy the departed forefathers by offering them water and the food offered to Vishnu (vishnu-prasadam). While performing sraddha if one recites Bhagavad-gita, the forefathers will become happy and if they are suffering in hell, they will ascend to heaven.

Not only sraddha ceremony, but any ceremony or ritual becomes glorious if it is accompanied by the chanting of Bhagavad Gita. If a person hears Bhagavad Gita at the time of death, all his sinful reactions are nullified and he becomes entitled to liberation. Then what to speak of a person who regularly reads Bhagavad-gita? Make it a part of your life’s routine to read at least one verse of Bhagavad Gita along with the purport written by Srila Prabhupada. Your life will become glorious. This is not our recommendation. Even scriptures mention this in various places. Just by chanting the Gita once, you will achieve the piety accrued from donating cows in charity to worthy recipients. If you read Bhagavad-gita daily, you will get the benefit of performing ashvamedha sacrifice. If you regularly recite two chapters of Bhagavad-gita every day with conviction, you will become eligible to live on the planet of Indra for a kalpa (1 kalpa = 4320000000 human years). If it is not possible to recite two chapters, read at least one chapter; you will attain the planet of Rudra. Or at least recite ten, or seven, or five, or three, or two, or one verse every day; you will attain the moon planet (which is achieved only by great yogis) and live there for ten thousand years.

Of course, the scriptures are trying to allure

you with the material benefits of life in heavenly planetary systems; but the benefit of reading Bhagavad-gita is not just limited to such material benefits. It can give you much more. Even those who are free from material desires read Bhagavad Gita because it is a compendium of knowledge. Lord Sri Krishna summarized the entire Vedic philosophy in these 700 verses of Bhagavad-gita. Sankaracharya, the propounder of advaita philosophy, acknowledged this in his Gita Mahatmya. He said that Krishna, the expert cowherd boy, extracted the essence of Vedas and Upanishads (which is compared to a cow) and presented that nectarean milk for our benefit.

In this material world, knowingly or unknowingly, we may commit sinful activities. Sins arising from offensive behavior, or offensive speech, eating forbidden things and sinful activities incited by senses can all be eradicated if one recites Gita with devotion. Even if by chance we commit some extremely horrible sin, we will not get implicated. Of course, we have to repent. Krishna gives assurance that He will save us from the effects of all sinful reactions: aham tvam sarva papebhyo mokshayishyami.

Curses or effect of black magic will not affect us if we regularly recite Bhagavad-gita. We can also gain freedom from the threefold miseries of the material existence (adhyatmika, adhibhautika and adhidaivika). By internalizing the principles explained by Sri Krishna in Bhagavad-gita we acquire a friendly disposition to all living beings and develop all good qualities. Our life, in this world, thus becomes successful and at the end of this life, we can attain the supreme destination. 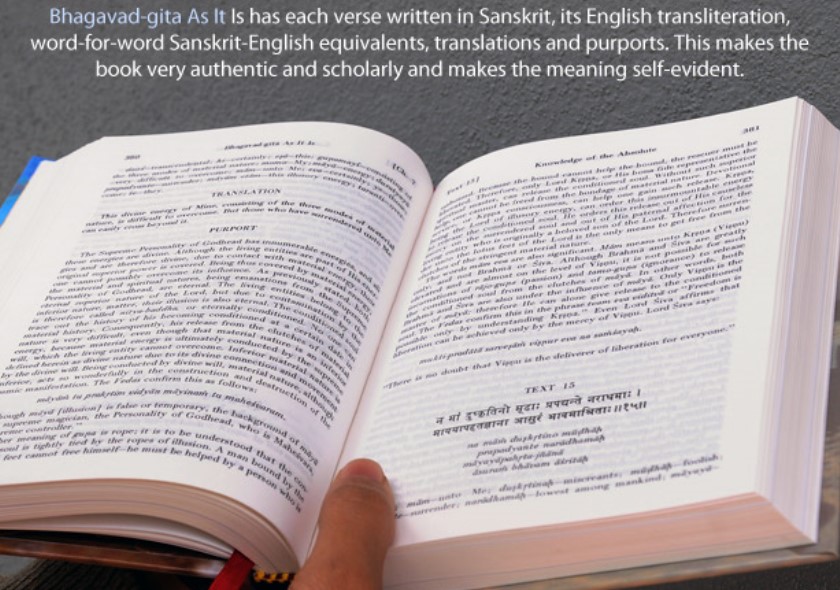 Let us make our life glorious. We request you to read at least one verse of Bhagavad-gita every day. It is also said that Bhagavad-gita should be read and understood with the help of a devotee coming down in the disciplic succession originating from Lord Sri Krishna. Srila Prabhupada, the founder-acharya of ISKCON, is a pure devotee of the Lord who devoted his life for propagating the teaching of Bhagavad-gita and Srimad Bhagavatam. He has written commentaries for the 700 verses of Bhagavad-gita which is available under the title Bhagavad-gita As It Is. You can purchase the Bhagavad Gita As It Is written by Srila Prabhupada from any of our ISKCON centers. This book has changed the lives of millions of people across the world. You can also read or buy this book online. 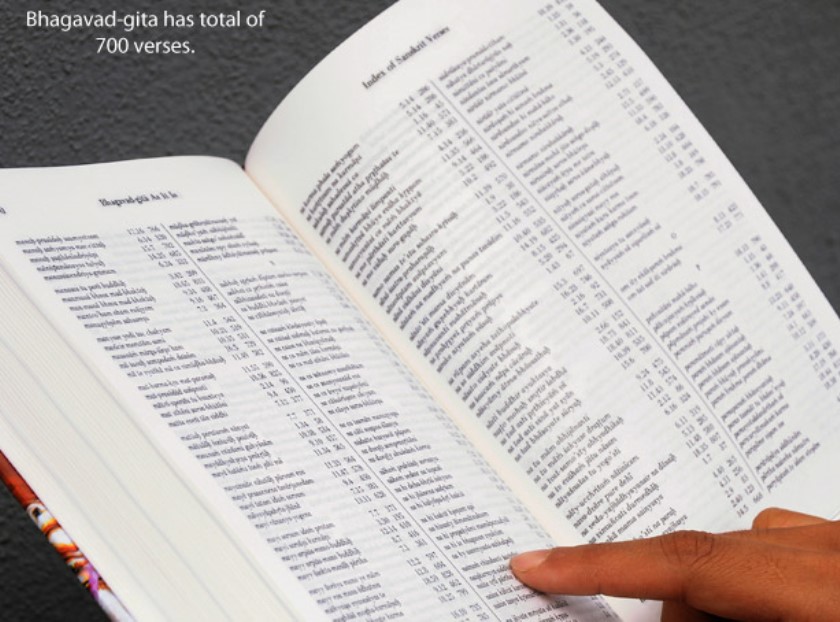 HIs Glory in Our Story: Genesis in Hindi