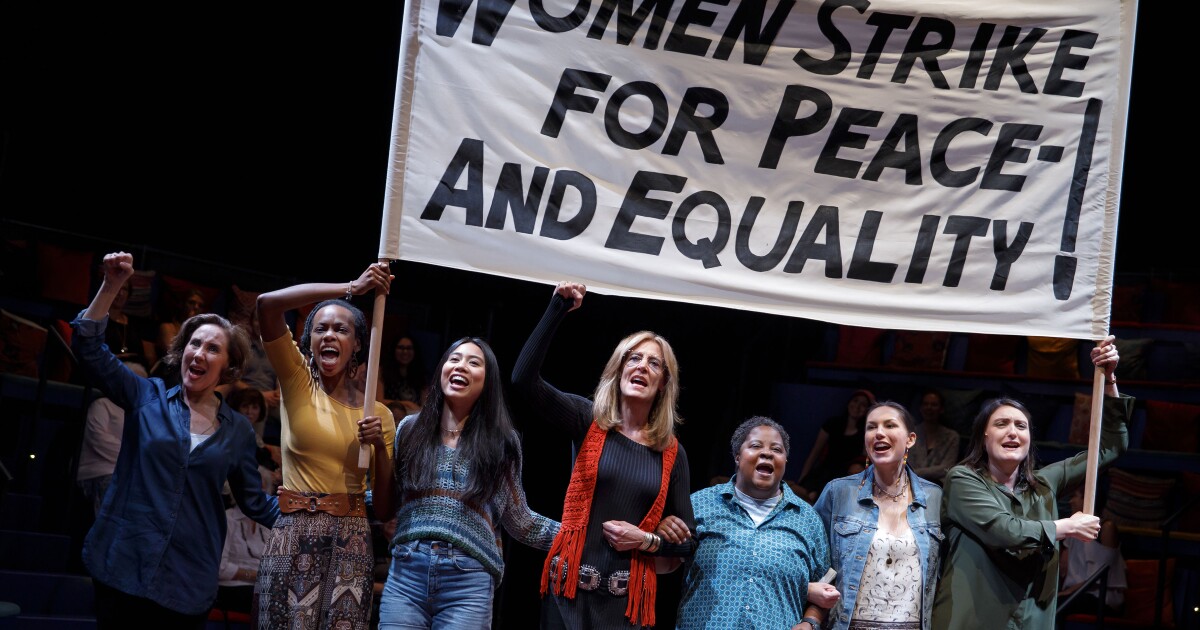 Gloria Steinem has been in the public eye for more than 50 years, but the feminist leader, who turned 86 in March, is having an undeniable pop culture moment. In January, she visited the Sundance Film Festival to promote “The Glorias,” a biographical film directed by Julie Taymor. And this Friday, she can be seen in “Great Performances — Gloria: A Life,” a presentation of the off-Broadway play starring a longtime friend, Christine Lahti. (There was also “Mrs. America,” but Steinem was not involved in the FX on Hulu limited series.)

“I feel as if I’m part of a big consciousness-raising group. I’m contributing my story in a way that I hope encourages other women and men to tell their stories,” Steinem says via Zoom. After spending most of the last few months isolated in her New York apartment, Steinem is in California, and she joined Lahti at her Santa Monica home (where they were socially distanced in separate rooms) to talk about “Gloria: A Life.”

The first act of the play briskly recaps Steinem’s life story, including her difficult childhood in Ohio, the abortion she had as a young woman, her pioneering journalism career, the founding of Ms. magazine and her work with other feminists, particularly women of color such as Florynce Kennedy and Wilma Mankiller. Act 2 of the performance is a “talking circle,” a Q&A session in which Steinem fields inquiries from audience members and listens to their experiences.

The idea for “Gloria: A Life,” which was written by Emily Mann and directed by Diane Paulus, originated with actress Kathy Najimy, who suggested that Steinem should do a one-woman show about her life’s work.

“I tried it and discovered no way could I possibly do it,” she says with a laugh, noting the difficulty of conjuring authentic emotion night after night. “I have such respect for what actors do now.”

When the project was reimagined as a play, Steinem was thrilled to be portrayed by Lahti, whose performance in the off-Broadway production of Suzan-Lori Parks’ play “F— A” had left an impression on her. “She spoke an entirely invented language. So I thought, ‘This woman can do anything.’”

“Gloria: A Life” ran at the Daryl Roth Theatre in New York in late 2018. The confirmation hearings for Supreme Court Justice Brett Kavanaugh were fresh in the minds of many audience members during each evening’s talking circle. “So many women were already triggered by that — just open wounds,” Lahti says. Other women spoke for the first time of abortions they’d had, and Steinem recalls an older white man who spoke movingly about being restricted by the masculine role. “It felt unexpected and right at the same time,” she says.

The experience impressed on both women the importance of teaching younger people about the intersectional history of the feminist movement and the fight for social justice. “One of the most gratifying things was when young women would say during the talking circle, ‘I wanna go home and call my mom,’” Lahti says. “So many young women haven’t understood the battles that Gloria and our generation fought and are still fighting and how far we still have to go. Understanding that historical perspective is really important.”

Longtime friends Christine Lahti, left, and Gloria Steinem, partnered on “Gloria: A Life,” which features both women: Lahti as Steinem and Steinem as the leader of each performance’s second-act “talking circle.”

Were you overwhelmed at the prospect of playing someone so well-known?

Lahti: When it was offered to me, I jumped at the chance, and it took me a quarter of a second to say yes. But it was daunting, because Gloria has been a longtime friend and I wanted so badly to get it right and [to Steinem,] you were so forthcoming and so open, and I would call you up and say, “Tell me the worst thing you ever did to your mom and if this is too painful don’t tell me,” and you’d always say, “If it’s not honest, it won’t be helpful.”

Steinem: It was amazing to see it grow into a real play, because it was no longer one person standing and a mike. When Diane Paulus arrived, I suddenly understood what [the] organizer is to a movement, a director is to film and theater.

Lahti: Collaborating with just women in the room, there wasn’t a shred of ego. I mean, some women have really strong egos and are pains in the asses too. But this particular group of women was the most collaborative, open experience I have ever had. It was a joy.

What kind of input did you provide in the writing process for this play?

Steinem: I felt I was submitting myself as a crossword puzzle that somebody else was [completing]. I really just devoted myself to answering questions as honestly as I could. My contribution was not to Act 1, but it was insisting on Act 2 because the talking circle experience has been so important to me. I came upon it accidentally. [When I went to speak,] I always left as much time for an audience discussion as I could, and in that way, I discovered the magic of audiences, that audiences are trustworthy, that it’s always different but it’s always somehow the same.

What was most important to you in portraying Gloria Steinem?

Lahti: As Gloria has said so eloquently, we both feel we are “living the un-lived lives of our mothers.” We connect on that level, so I really wanted to get into the relationship between Gloria and her mother. We’re both from the Midwest, we both are fierce feminists. Although, I would say I’m like a little baby activist compared to her. But we share so much of the same passion to help make all women matter, to help make all people matter, because we both grew up feeling like our mothers didn’t matter.

Steinem: The process made me realize more deeply that part of the reason I didn’t feel the need to have children is because I had been my mother’s mother. It’s very difficult to be a small person in charge of a big person. It gave me an unrealistic picture of what being a parent is. So I am in awe of Christine, who has birthed and mothered other people while remaining herself. That seems to me one of the most difficult things on Earth because of what I saw with my mother.

She was a pioneer, a newspaper reporter at a time when that was impossible. She had to write under a man’s name in the beginning. She became a Sunday editor of a big newspaper. She married my father, had a daughter and just couldn’t make it all work and had what was in those days called a nervous breakdown and was institutionalized for a while. And then became addicted to an early form of tranquilizers. So her inability to do what she loved was the beginning of the submersion of her true self.

What was your mother’s experience?

Lahti: My mother did not have the same breakdown and mental illness, but my mom was a typical suburban ’50s housewife. I just accepted that intrinsically, biologically, that that was the way things were — that women were second-class. I saw that women were a bit of a joke. None of the mothers of my friends had jobs. They were all housewives and mothers, but they were not treated with respect, and I really felt that. But I thought that’s the way the world was, and it wasn’t until I got to college and people like Gloria Steinem taught me about feminism and I realized there is not a biological or intrinsic inferiority of women, that it’s all made up. And that there was a way forward with my life that included being a respected, autonomous human being.

Between this project, Julie Taymor’s film “The Glorias” and “Mrs. America,” you are having a moment in pop culture.

Steinem: Julie Taymor’s movie is profoundly different from the play. A lot of it takes place in India, where I was inspired to become a feminist, and it’s very much like “Across the Universe” [Taymor’s film inspired by the music of the Beatles]. Because it’s a film, she is able to have moments of magical realism.

Is it strange for you to see your life portrayed in these different projects?

Steinem: “Mrs America” is hopelessly wrong. I don’t think it’s necessarily on purpose, but it is just factually, historically wrong, because the Equal Rights Amendment was defeated by the insurance industry and other people who were profiting off women’s cheap labor. Phyllis Schlafly never changed one vote. I’m very disturbed that people may look at “Mrs. America” and feel that women are our own worst enemies. Because even when we disagree, we don’t have the power to be our own worst enemies.

We are in this moment of mass protests around race, the #MeToo movement and a global pandemic that has brought attention to inequality. Are you feeling hopeful about positive change?

Steinem: I do think hope is a form of planning, and we should not allow that to be taken away from us, because then we’re defeated from the very beginning. COVID has revealed a huge amount of injustice which is up to us to do something about. I also think it’s changed our consciousness in a more transformative way, because the virus doesn’t observe race or gender or class or national boundaries. So we are seeing ourselves as passengers on spaceship Earth, which we are, more than at any time I’ve ever witnessed. We’re all vulnerable. COVID does not care about labels we put on ourselves.

Lahti: I’m really hopeful. It was such a seismic shift culturally with the #MeToo movement. I feel the same way in terms of racial injustice right now. I think the focus on racial injustice is past due. It is urgent. It is necessary. Just like with the #MeToo movement, there are a lot of men who weren’t overtly sexist but had to look at their unconscious sexist bias and say, “Do I interrupt women?” Not just “Do I touch them inappropriately?” I think that’s what a lot of people are now doing about race, and I think it’s so important that it starts [at] a personal level.

‘Gloria: A Life’ on ‘Great Performances’

Where: KOCE
When: 9 p.m. Friday
Rating: TV-14 (may be unsuitable for children under age 14, with an advisory for coarse language)

From Hell to the Glory of God