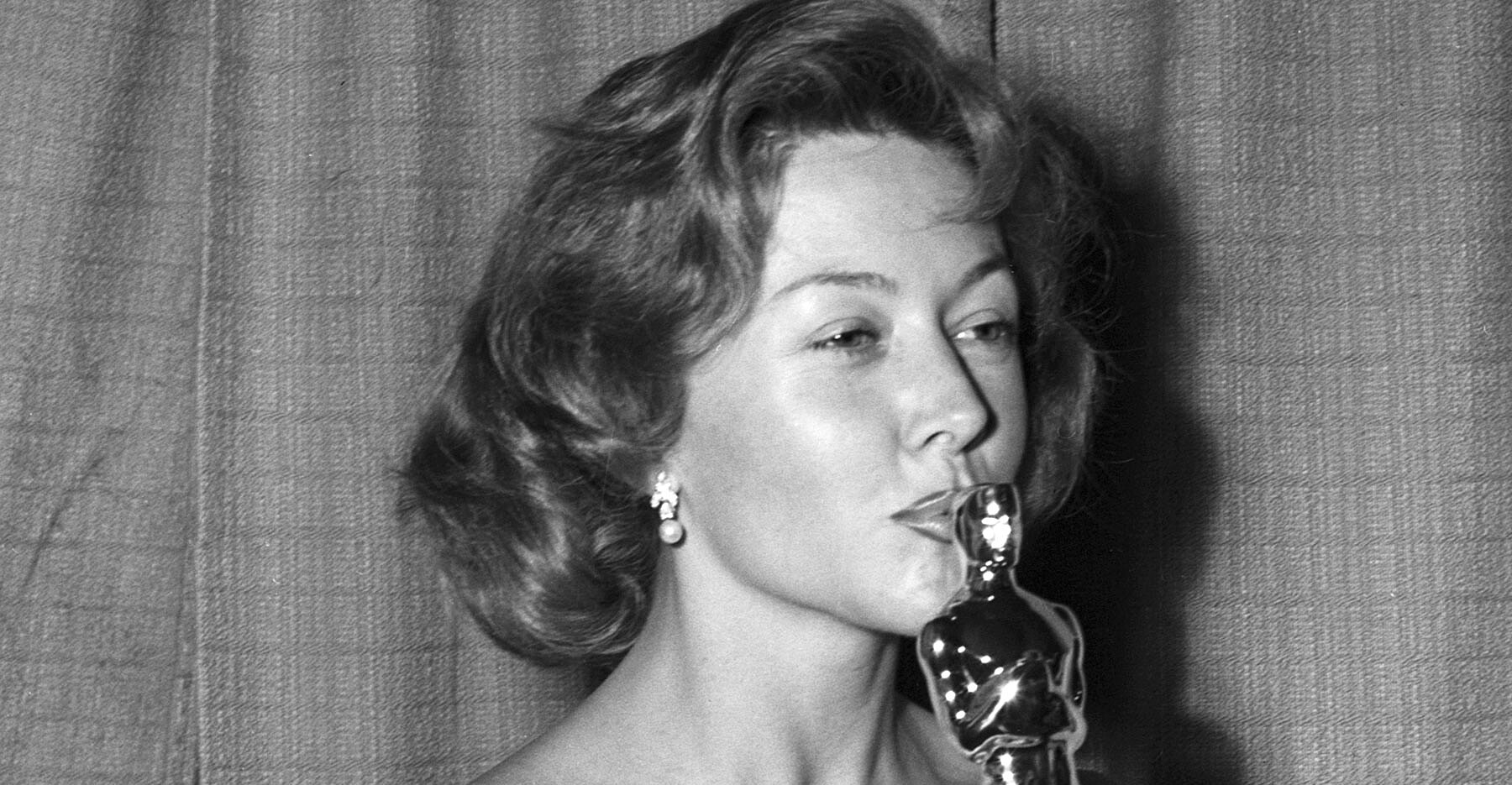 A version of this story appears in Entertainment Weekly’s Oscars Untold Stories issue. To read more about the greatest untold stories of Hollywood’s biggest night, pick it up on stands now, or buy it here. Don’t forget to subscribe for more exclusive interviews and photos, only in EW.

Gloria Grahame arrived at the 25th Academy Awards on the verge of superstardom. It was March 19, 1953, and the 29-year-old had spent the previous year melting away a tart-with-a-heart image that took root with the 1944 sex comedy Blonde Fever and crystallized with her sultry turn as Violet in It’s a Wonderful Life with James Stewart. She’d appeared in four major releases in 1952, including a reunion with Stewart in Cecil B. DeMille’s The Greatest Show on Earth — which ultimately won Best Picture. Her Hollywood peers recognized her arrival as a serious actress, nominating her performance in The Bad and the Beautiful for a Supporting Actress Oscar, her second career nod following 1947’s Crossfire.

When presenter Edmund Gwenn called Grahame’s name as the winner, however, she carried herself to the stage atop quivering heels, with a deer-in-the-headlights expression plastered on her face. She accepted with four words, “Thank you very much,” before rushing out of sight to a collective affectionate chuckle from the audience. But this was no false modesty. “Gloria was one of the most insecure girls I’ve ever met,” says Terry Moore, Grahame’s friend and fellow Supporting Actress nominee. “I thought Supporting was the kind of [award] you win when you’re older. I felt unqualified then, [but] Gloria always felt unqualified.”

What read in the room as a bashful star’s brief (but no less endearing) display of humility quickly snowballed into a scandal for Grahame. Rumors circulated that she rebuked the honor after getting drunk at the event, which caused her to trip and curse en route to claim the prize — none of which was true. She did, however, decline to sit for post-victory interviews, a move that didn’t court new fans among Tinseltown’s ruthless band of gossip columnists.

Sadly, following her Oscar victory, the beauty Grahame embodied so artfully on screen never reflected the personal turmoil festering under the surface. At 29, she was already two divorces deep into a turbulent romantic life: one from allegedly abusive actor Stanley Clements, the other from boozy Rebel Without a Cause director Nicholas Ray, with whom she had a son, Timothy. Her crippling self-doubt had long served as fodder for journalists. Hedda Hopper pegged her “a shy little introvert [who’s] so self-conscious it hurts,” while an April 1952 Los Angeles Times profile painted her as a helpless worrywart who begged crew members to lambaste her performative flaws on set.

“I…. suffered from a really bad attack of ‘Oscar Fright,’ and I don’t think I’ve recovered from it yet,” Grahame told Silver Screen magazine the summer after she won the coveted award. She claimed to appreciate the accolade but admitted her son had appropriated the statuette for himself: “I practically haven’t seen my Oscar since I won it. Timmy plays with it in his room…. and takes it to bed with him when he goes to sleep. As for what I think of my cherished Oscar, all I can say is that no fond mother takes away her child’s favorite plaything!”

In subsequent years, her image hardened as the mysterious bad girl of noir cinema in films like The Big Heat and Human Desire — until, in 1954, she began filming the adaptation of Richard Rodgers and Oscar Hammerstein’s musical Oklahoma! as the “girl who can’t say no,” Ado Annie, the same year she married writer-producer Cy Howard.

“She was pushed and belittled [by the crew] and stumbled her way through because she felt so inadequate doing a musical,” remembers Grahame’s niece Vicky Mitchum, claiming it was her aunt’s Oklahoma! colleagues who instigated a hostile working environment after learning Grahame couldn’t carry a tune despite her Academy-verified status. “Everybody told her how horrible she was.”

Grahame herself may not have been an innocent party. She allegedly assaulted costars Charlotte Greenwood and Gene Nelson on separate occasions, and purposely stepped on scene partners’ lines. Scarred by her Oklahoma! experience, Grahame scaled back her work to care for her children in 1955, divorced Howard in 1957, and married former stepson Tony Ray (son of Nicholas) in 1960. Later, when she battled Howard for custody of their daughter, Marianna Paulette, rumors circulated that Grahame had initially seduced Tony when he was just 13 — news that, along with her tarnished professional reputation, made her a Hollywood outcast.

Thus, Grahame dedicated herself to raising her growing family after having two sons with Tony. She popped up as an occasional guest on TV series, and when she found her way back to the big screen, it was on the cult circuit of schlocky exploitation films like Blood and Lace (1971) and Mama’s Dirty Girls (1974). Still, wherever Grahame went, her reputation followed.

“[The Tony affair] had been a huge scandal,” says actress Jane Alexander, who has fond memories of working with Grahame on a 1972 stage production of William Saroyan’s The Time of Your Life. “I certainly was aware of it when we worked together.”

Mary Steenburgen, who won an Oscar for 1980’s Melvin and Howard, echoed positive feelings about costarring with Grahame in that Jonathan Demme-directed drama. But Grahame played Steenburgen’s mother in that film, and Steenburgen felt “saddened” to see the aging star in the role.

In the final stages of her tumultuous relationship with show business, Grahame never reclaimed her former glory, but the Oscar itself stood proudly on her mantel, an enduring reminder of her accomplishments. Unfortunately, today its exact location is unknown. Nicca Ray, Nicholas’ daughter from the filmmaker’s post-Grahame marriage to Betty Utey, claims it resides with Tony, who remained a presence in Grahame’s life after their 1974 divorce. (EW was unable to reach him for confirmation.) “I don’t know the details as to why she gave it to him,” Nicca says, “but why wouldn’t she? They loved each other.”

Amid the wilted remains of her faded career, however, Grahame’s personal life finally began to blossom. She met aspiring actor Peter Turner, nearly three decades her junior, while she was in Britain working on a 1978 production of W. Somerset Maugham’s Rain, and their whirlwind romance forged a bond that carried through to Grahame’s 1981 death at age 57 from cancer-related complications.

Turner wrote about their love story in his memoir, Film Stars Don’t Die in Liverpool, which director Paul McGuigan adapted into a 2017 feature starring Annette Bening and Jamie Bell. The film doesn’t dwell on Grahame’s misfortunes as much as it paints a celebratory picture of their time together, though Turner vividly recalls her real-life gripes about the industry.

“She didn’t enjoy the Hollywood system,” he remembers. “She described it as a jungle, and she didn’t want to be one of the beasts.”

Flag of Freedom – Home of Heroes