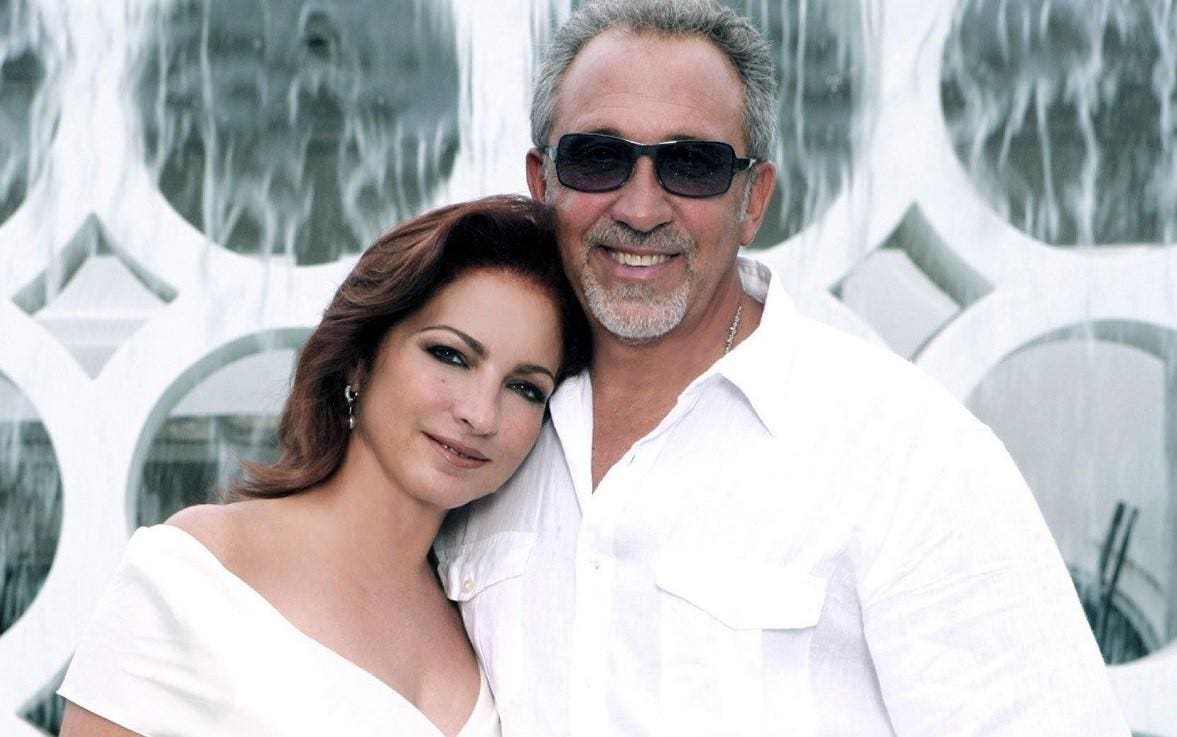 “What I want to share is the real truth of our life,” Emilio Estefan says of On Your Feet! the new Broadway musical about him and his wife, Gloria. “People think you just become famous overnight. It doesn’t work like that.”

I don’t quite catch it. Emilio retains a thick Cuban accent, and I ask him to repeat himself. Gloria chimes in: “If you think it’s tough understanding him now, you should have heard him talk to Miles Davis.”

We’re sitting in an air-conditioned hideaway in the Marquis theater, where the show is in previews, and our conversation orbits the challenges of putting one’s own life onstage. Fittingly, it’s punctuated by anecdotes about the luminaries they’ve worked with along the way.

“We were at the Grammys one year, sitting next to Miles,” Gloria continues, noting the jazz legend’s infamously raspy voice. “Miles loved ‘Conga,’ and was raving about it, and both of them were kind of yelling across me. Then they’d each lean in and say, ‘Please translate!’ Neither of them could understand a thing the other was saying.”

Gloria and Emilio Estefan: married 37 years and stronger than ever. (Photo: Jesus Carrero)

When interviewing Gloria and Emilio, one has the sense of sitting with a finely honed comedy duo, who finish each other’s punchlines, jokes and stories without missing a beat. Or to put it another way, a successful and long-lasting marriage. Which it is: 37 years, to be precise.

It’s also been a massively successful business partnership. Long before Jay-Z and Beyonce teamed up, Emilio was producing Gloria’s music with the Miami Sound Machine, selling millions of records, and winding up with an combined estimated net worth between $500 million and $700 million. (Emilio remains cheekily obtuse when prodded, saying, “Some of the estimates I hear are true, and some are not.”)

So why a Broadway musical? While the show is doing well so far, it’s a drop in the bucket for the duo’s finances, and even in a best case scenario it will be years before On Your Feet! could rival something like Wicked as a billion-dollar enterprise. The simple truth is that the Estefans, like most producers, aren’t in it (just) for the money.

“I want to give the audience something they can take away,” Emilio says. “It’s about the journey,” Gloria adds. “Seeing a live performance – that human connection – it’s unique. I’ve always loved Broadway. We brought our kids up on it.” (Their daughter, Emily, penned the only new song in the show.)

This ethos of connection is the through-line of their career. One could look at this Broadway biopic as the only natural next step for the couple who have conquered much of the entertainment industry, often against huge odds.

“We literally had to battle our own record company,” Gloria says of the resistance they faced early on. “We had to do it in spite of them.” The executives publishing the music insisted they change their name to something less Hispanic, and give their music the same treatment. “But we knew the audiences were responding to it.”

They were right – to the tune of over 100 million sales. But these hurdles also drive the musical itself, which covers their journey until 1991, including Emilio’s tortuous departure from Cuba at age 11, and the near-fatal bus accident that left Gloria with a shattered spine.

The risks of Broadway itself may be a part of the draw, too. Emilio has built a reputation on his shrewd entrepreneurial instincts, and has a diverse portfolio of assets that include partnerships with
Target
and
AT&T
, numerous real estate holdings, and two best-selling books. He conceived and produced the Latin Grammys -which drew 10 million viewers last year on Univison – and the Estefans together became the first Hispanic minority shareholders of an NFL team (The Miami Dolphins).

But certain struggles remain for the Hispanic community they speak to and for. On Your Feet! is one of only two shows on Broadway that features a Hispanic voice and a corresponding cast.

“Absolutely,” Gloria agrees when asked if Broadway’s whitewashed palette is frustrating. “It’s an honor to be here, but we [people of color] don’t see ourselves onstage when we go to Broadway. The face of America is changing, and the stories have to change, too.” The pair hopes to prove to other producers that there is demand for these stories, as they quote – in unison – Field of Dreams: “If you build it, they will come.”

Anna Villafane and the company of ‘On Your Feet!’ (Photo: Matthew Murphy)

The test of the show’s financial success, however, will be whether it can extend beyond the initial buzz. While Estefan superfans have been flying in from around the world, the show will need constant audience infusions for months to recoup its $15 million capitalization.

The initial marketing has been broad: playing up the “Cuban spirit/American dream” tagline,

highlighting the romance, and showing off Sergio Trujillo’s lauded choreography. In other words, it’s targeting tourists looking for a good time – who happen to make up 70% of Broadway ticket buyers.

The show is also relying on the titular duo to maximize outreach. Their influence goes far beyond Broadway, and is driven by the matching intellects that have connected them to cultural and world leaders for decades.

Emilio has at various points advised everyone from the President of the United States to the Pope. These meetings have happened both through traditional channels (the Oval Office) and when he’s least expected them (a public restroom).”I call him Forrest Gump,” Gloria chuckles. “He’s always in the right place at the right time.”

Gloria is no slouch herself in the worldwide eye as a former delegate to the United Nations. She doesn’t have anything too positive to report, however. “Now I know why nothing ever gets done in the world. The security counsel is useful, but everything else…”

Though not typically pugilistic, the Estefans do hold strong beliefs about the state of their native country, the Castro regime, and the changing relationship between Cuba and the United States.

“The Pope [John Paul II] invited me to go to Cuba with him,” she says, “but I couldn’t just sit there in agreement with what’s going on in that country. I had to say no. We are personae non gratae there.”

Her father was a Cuban police officer before fleeing the country, who then joined the U.S. army and was taken prisoner by Fidel Castro after the Bay of Pigs invasion. “The real embargo is the one the government has on the Cuban people. Their whole health care system is a sham. The hospitals in Michael Moore’s documentary? Please. Those are only for tourists.”

She doesn’t seem to have much faith in the recent warming of relations between Cuba and the U.S. either. “The bottom line is: the rest of the world has been going there forever, and nothing has gotten better for the Cuban people. Everything goes through the government, not through the Cuban people themselves.”

Emilio is slightly softer in tone, but one senses he’s holding back out of shrewdness, not apathy. “It’s different for each generation. The old people will never forget. The younger people have hope. But everybody knows how depressing it is, especially concerning basic human rights.”

While not overtly political, it’s impossible to separate On Your Feet!  from its creators. The passion that has defined their brand suffuses the material. “We want you to laugh, to cry, to feel something, and then leave dancing.”

When asked if they want to highlight any part of the musical, Gloria responds immediately: “Our team.” This team is led by the writer Alex Dinelaris, director Jerry Mitchell, and choreographer Serjio Trujillo. Dinelaris (who won an Oscar for the script of Birdman) in particular has put in massive effort to condense the couple’s life into two hours. “Alex spent a year and a half flying back and forth to Florida, talking to me, my mom, to everybody in our lives.”

Leading the cast are the two performers playing younger versions of the Estefans: Broadway vet Josh Segarra and first-timer Anna Villafane. The real Estefans are nothing short of ebullient about their doppelgangers. Emilio in particular is quite chipper, and laughs: “He’s so handsome. It’s great that people will think I actually look like that.”

So far, so good. But for all the assets, the deals, the money, and the fame, it’s really still about the rhythm: “Music can change the world. It’s gotten me through my darkest times. That’s what we did with our life, and that’s what we want our show to inspire.”