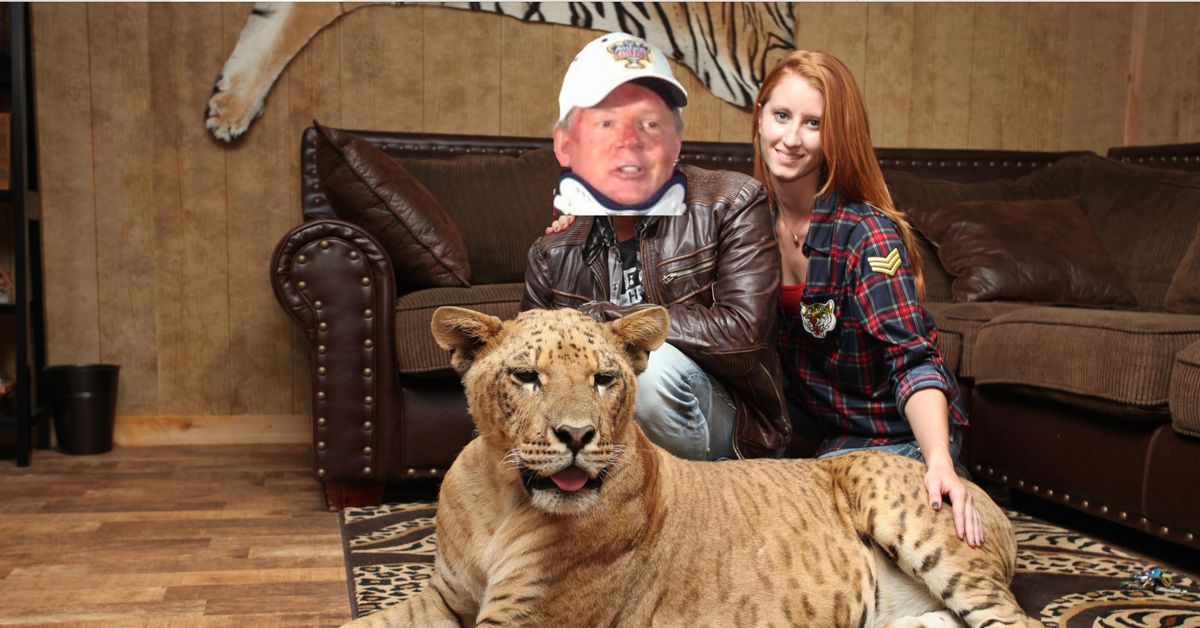 Warning: “Tiger King: Murder, Mayhem and Madness” spoilers as well as extremely poor photoshops are contained in this article

Despite much of society being under quarantine and away from the water cooler, you have probably heard about Netflix’s new documentary series “Tiger King: Murder, Mayhem and Madness” from somebody by this point. If you are active on any social media platforms then you are almost certain to have seen someone commenting on the show.

The series documents the life of Joseph Maldonado-Passage, aka “Joe Exotic,” and winds us through the universe of Joe Exotic’s zoo, the G.W. Exotic Animal Park in Wynnewood, Oklahoma. Throughout the series we get to meet plenty of strange and colorful characters who work and live there, but we also meet all of the other major players in the world of big cats. At first glance, they are hypocritical, criminal, egotistical and depraved.

However before we stand in judgement of the actions taken by those in the strange subculture of exotic pets, we thought it might be good to do some self-analysis. We love College Football. Specifically, we love the SEC. So, do the characters in “Tiger King” have some parallels to our own strange little universe?

Much like Nick Saban is to College Football, Doc Antle is seen as the lord of his world. And much like Saban’s Alabama program, Antle’s The Institute for Greatly Endangered and Rare Species (T.I.G.E.R.S.) is the gold standard that all other exotic zoos are trying to catch up to. Antle rules with absolute power. If you please him then your life is good. If you don’t, he will make your life a living hell. Both operate an organization built around them having cult leaderish sway over all underlings. Their models are the ones that every other program tries to copy as they strive for success. Both men have built their empires in places nobody else really would choose to build a castle- Myrtle Beach, SC and Tuscaloosa, AL. The show’s revelation that Antle keeps his overhead costs down by putting tigers in a gas chamber once they’re too old to pet provides confirmation for the suspicions of many. Similarly, the rest of the league is wondering what skeletons Saban has stashed in the building of his dynasty.

AUBURN (ALL OF IT) – Carole Baskin Carole Baskin is the self-proclaimed “Mother Teresa of Big Cats.” She is actually doing the same thing as all of the other exotic zoo owners- using big cats for her own profit. However, she harbors delusions of grandeur and self-righteousness because in her mind she’s doing it in a holier way than the rest. To Carole, it is because of her goodness that others in the exotic zoo industry want her out of the picture, and in Joe Exotic’s case specifically, dead. Enter Auburn, the SEC program whose fans most identify with martyrdom. Auburn fans are quick to point fingers at other programs for cheating while talking about how “they do things the right way.” When they lose it is because they are virtuous and their opponents are bagdropping heathens lining the pockets of recruits, referees and state officials.

Just as Carole Baskin’s first husband disappeared under mysterious circumstances, and may or may not have been buried under a septic tank or disposed of in a tiger’s stomach, making her the only person on the show who may have actually committed a murder, Auburn is actually the SEC’s dirtiest program. The Tigers have been placed on probation seven times. Like Carole, Auburn might be the only actual criminal here. However, no amount of hard evidence will ever convince them that they aren’t the only godly ones in this cruel universe. 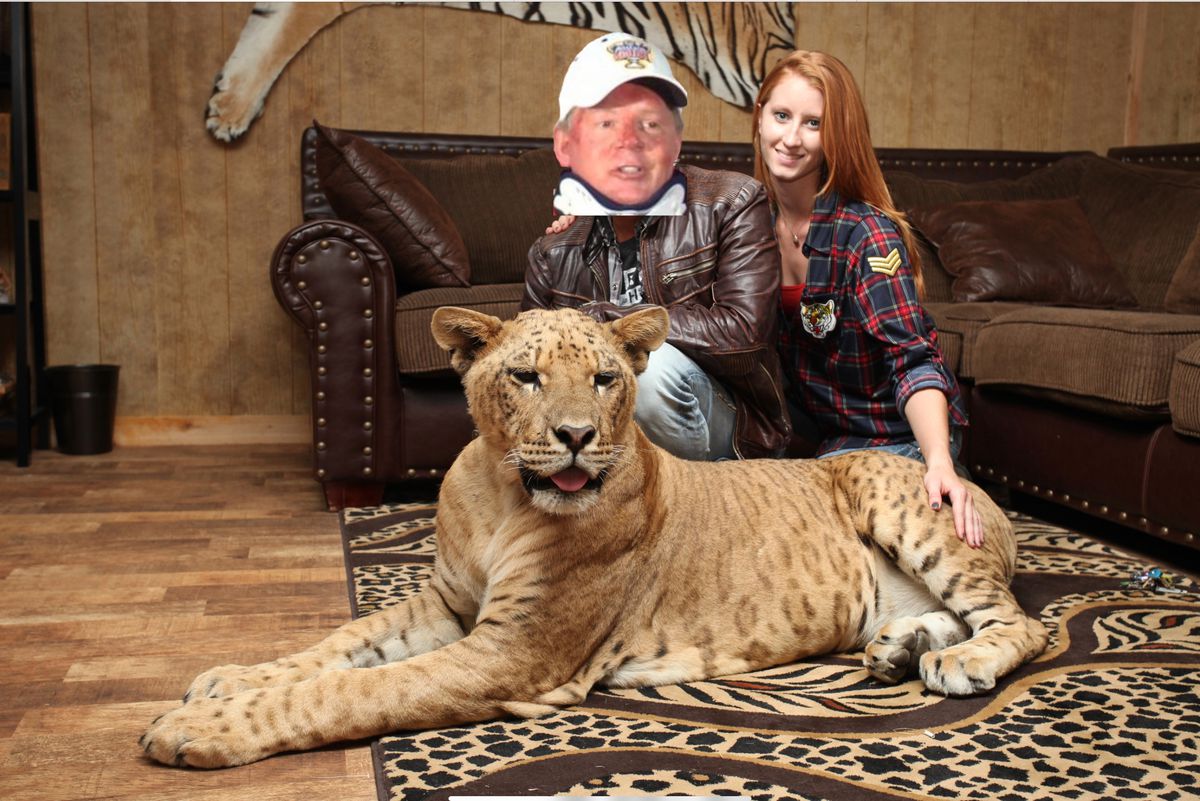 Both are the sleaziest figures in their professional arena. Somehow they continue to con themselves into jobs despite not bringing anything to the table but a womanizing attitude and potential investigations. Both seem to be in the game because their titles might allow them to attract a woman who is not their wife. When things go south they disappear into the night, sometimes leaving a note, but often without warning. 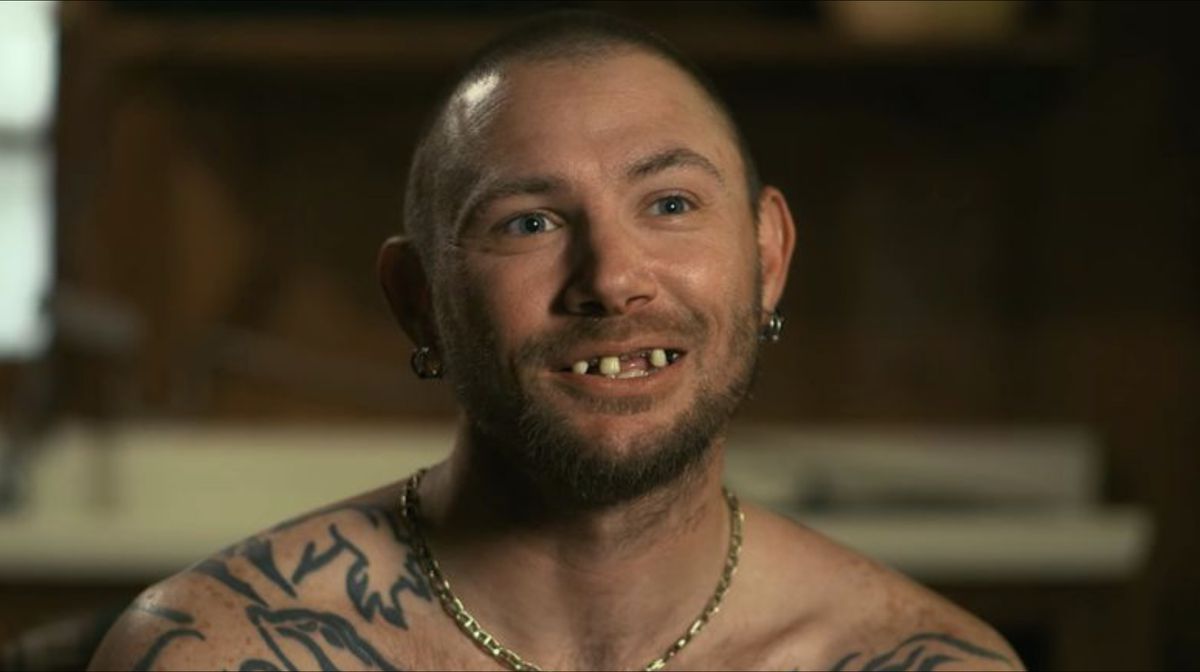 Pretends to be part of the family for as long as it’s advantageous, but is actually just waiting on their chance to flip and testify on everyone else (hello, Eli Drinkwitz and his backdoor recruiting allegations.) Missing teeth. Have normalized the pubic bone tattoo. Really just here for the meth. 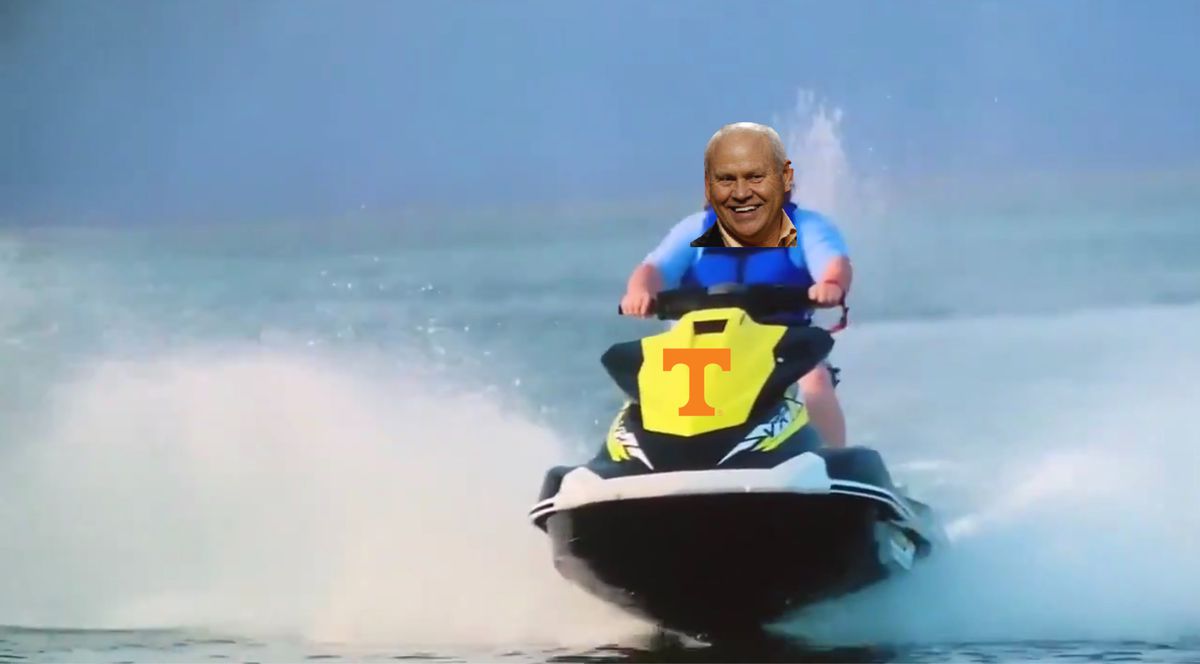 James Garretson is the guy that screws up the whole system for everyone. He could have gone along and been content to be a player in the dirty tiger game. Instead, he backstabs the guy he says he’s working for, Joe Exotic. Somewhere, Johnny Majors is nodding knowingly with the knife that Phillip Fulmer left in his back when he stole his job. Much like Fulmer, once Garretson got a place at the table he used his influence to run off to the law and give up all the good trade secrets.

If you’re unfamiliar with the late 90’s of SEC Football, this perfectly mirrors what Fulmer did over a stud high-school defensive tackle by the name of Albert Means. Alabama landed on probation for 5 years. Joe Exotic got 22 years. Worst of all for both SEC Football and exotic pet owners, the trials drug all of the dirt out into the open. For Fulmer’s part, UGA, Arkansas, Kentucky and Memphis all got drug into the drama. Like Fulmer, who refused to travel to SEC Media Days in Hoover during the early-2000’s due to his fear of subpoena, Garretson is now laying low somewhere trying to avoid involvement in any other legal matters. Much like Vanderbilt, we are not entirely sure how or why Joshua ended up involved in all of this. Fits in fine because hates the feds, but also doesn’t because he uses big words like “Libertarian” to identify himself. Will suffer through all sorts of terrible conditions in order to tell his parents he has the proper job title. Knows all of this is madness, but is in too far to get out at this point. Vapes. 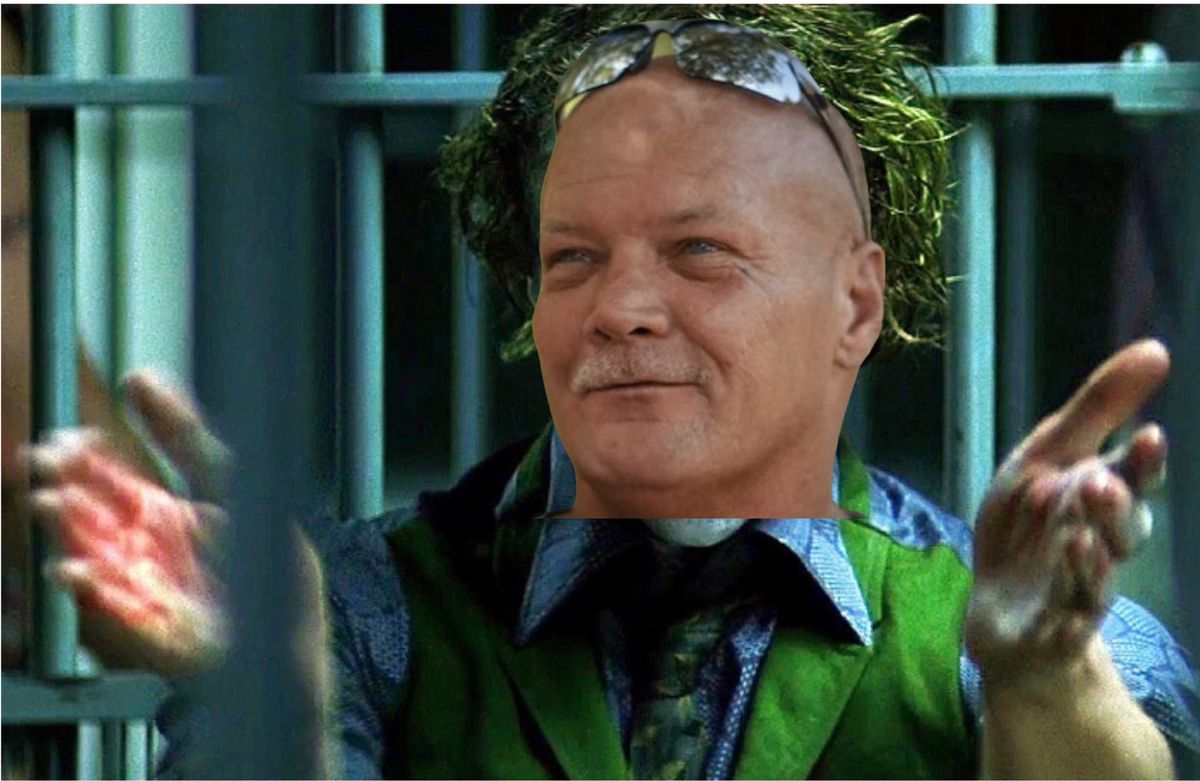 Allen Glover was the man who all too conveniently claimed that Joe Exotic had given him $3,000 to kill Carole Baskin. In reality, it appears all of this was setup by Glover’s boss Jeff Lowe in order to get Joe out of the picture and gain full control over the zoo. This mirrors the path of one Leo Lewis, a prized high-school inside-linebacker who was the number three player in the state of Mississippi during the 2015 recruiting cycle. Lewis ended up signing with Mississippi State, but became most famous for being the man who testified to the NCAA and took down in-state rival Ole Miss.

Like Glover with Lowe, Leo was a pawn in a much more sinister game that was being played by the higher-ups in Starkville. In exchange for his testimony, Lewis was not punished for taking money from both sides in his recruitment. In both cases, the only difference between those who testified and those who got punished was that one agreed to talk to the enforcement officials first. The lesson, as always, is never snitch. 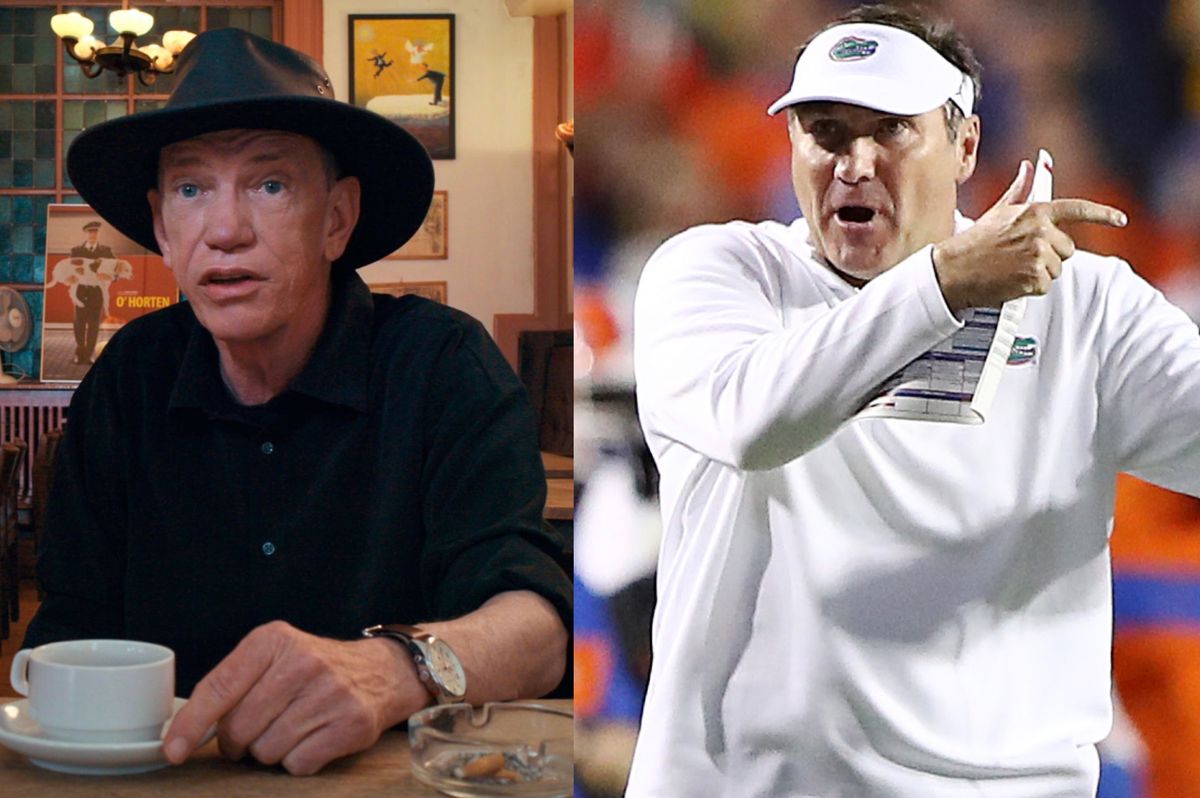 Put in a lot of years, but both have little more than stories to show for it. They have combined for zero division titles, zero SEC title game appearances and zero conference championships. 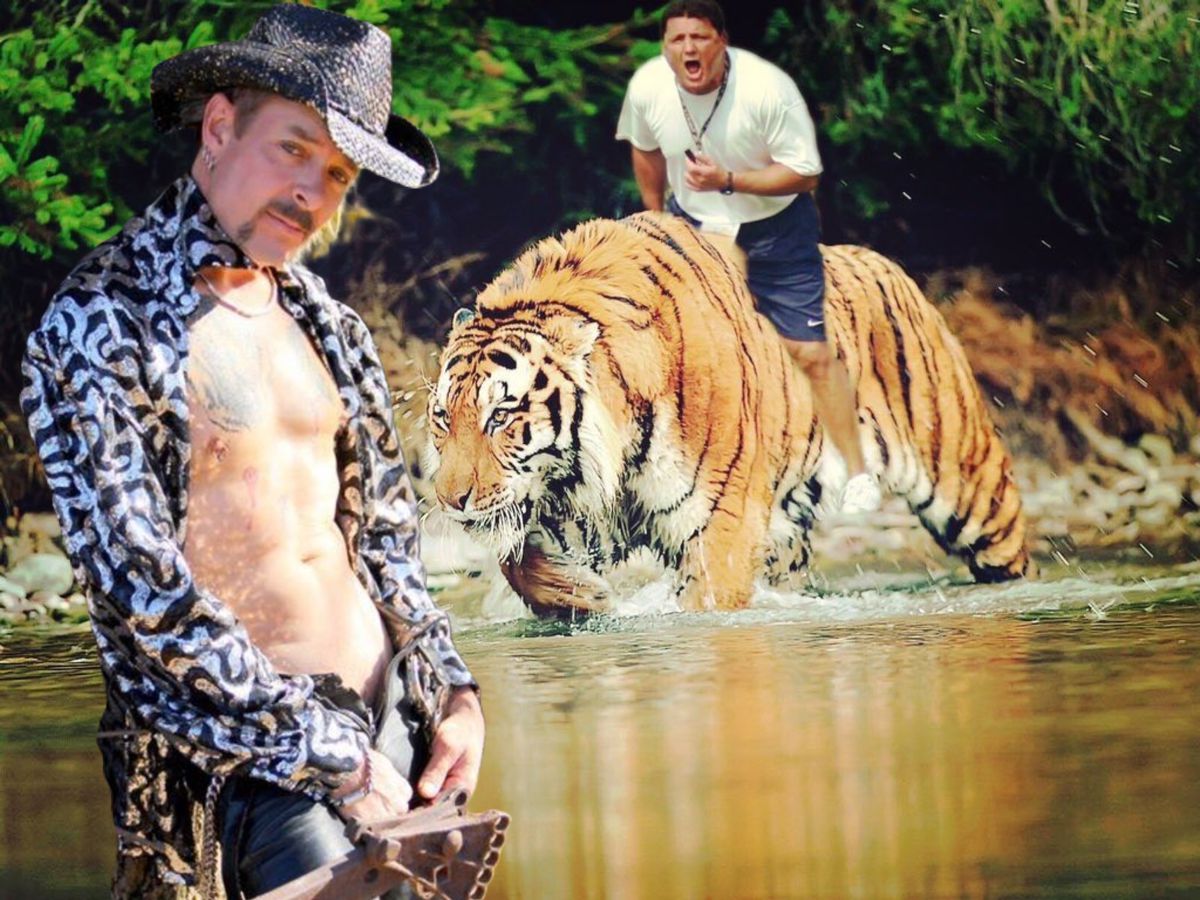 These two are clearly kindred spirits. Both of these alphas have gotten shirtless in an effort to seduce young men into joining their programs for years. Because of this and many other similarities, the SEC’s Tiger King is the only man truly worthy to share the title with Oklahoma’s. Defying the expectations of most, these unlikely folk heroes have become wildly popular. Both Tiger Kings speak with a sometimes hard to understand accent, and despite the presence of Doc Antle and Nick Saban in their respective divisions, their recent successes have made each the clear champion of their profession.

Joe and O were both basically governors of their home state for a minute there. Exotic formally ran, and was clearly the populist choice in Oklahoma. Orgeron has been the governor of Louisiana since LSU beat Alabama on November 9th. Don’t believe me? Well, there’s video and everything…

In addition to being political powerhouses, both men have been involved with music videos that absolutely SLAP.

In conclusion, we can raise no judgements towards the characters of “Tiger King: Murder, Mayhem and Madness.” Like all of us they are people, striving towards glory on their own type of gridiron. Instead, we will make a snack, grab a beverage and pick a side to holler for…

September is a long ways out.