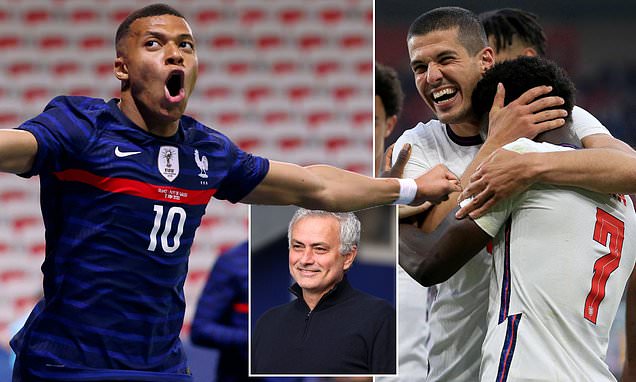 By Adam Shergold for MailOnline

Jose Mourinho believes it’s now or never for England at Euro 2020 as the Three Lions aim to finally win their first tournament since 1966.

Gareth Southgate’s men will have home advantage for the majority of the tournament if they go all the way with Wembley set to host the semi-finals and the final.

But Mourinho believes this could be both a blessing and a curse with the former Chelsea, Manchester United and Tottenham manager backing France to follow up their World Cup triumph in 2018 with another success this summer.

‘England is probably – with Brazil – one of the two most difficult countries to be a national coach because of what people expect from the team,’

‘It’s a difficult country and we expect a lot from them. Culturally, instead of support them from day one until the last day, we start immediately with some negativity around them.

‘They have to be very strong emotionally to cope with that pressure. If they do that, they have a big chance.

‘It has to be now, because it was in 1966. It wasn’t in Euro ’96 because of a penalty shootout which is something very unpredictable. They have to push with everything this time.’

England’s build-up to the tournament has been far from ideal with an injury to Trent Alexander-Arnold ruling him out while key players Jordan Henderson and Harry Maguire are also in their own fitness races.

Southgate has just one more match to fine-tune his team, a friendly with Romania at Middlesbrough on Sunday, before their Euro 2020 opener against Croatia.

France are the tournament favourites and Mourinho believes this is entirely justified.

‘France could make an A team, B team and C team because in this moment they have an incredible number of top players,’ he said.

‘When you have Kylian Mbappe on your side it’s very difficult not to win.

‘I cannot see any weaknesses. If I had to say one team to win it, I will say them – because the group of players is fantastic.

‘They have to win it. If not, it is an unsuccessful Euros.’