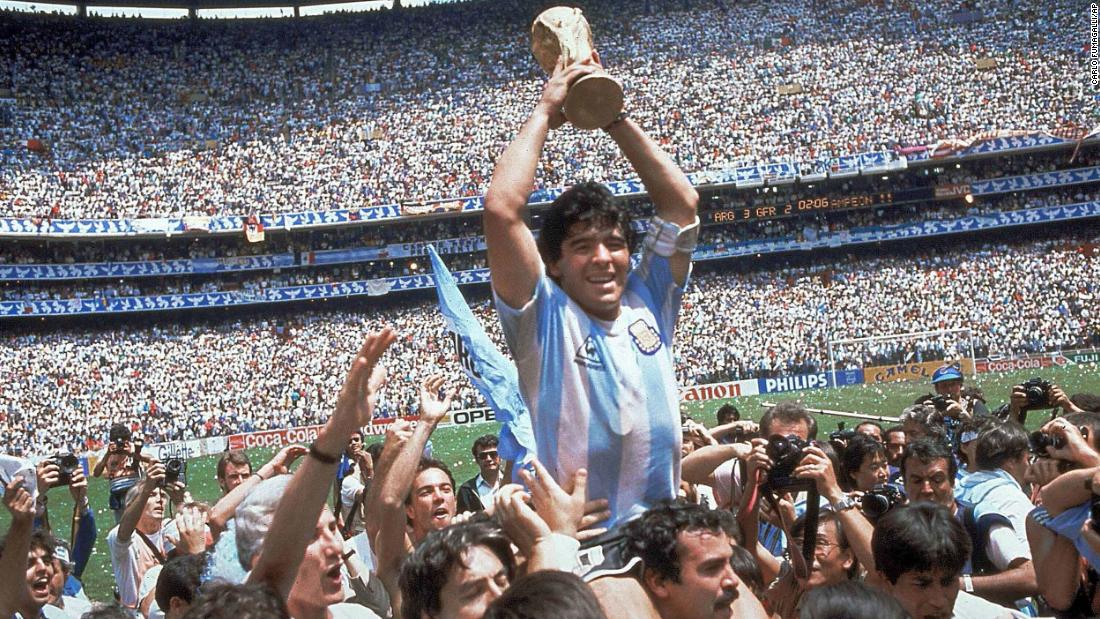 Buenos Aires (CNN)Argentina soccer legend Diego Maradona, who has died aged 60, succumbed to heart failure, a source from the Argentinian Justice Ministry present at the time of his autopsy told CNN en Español on Wednesday.

The cause of death was an “acute secondary lung edema to exacerbated chronic heart failure,” the source said.

Heart failure is a chronic condition that gradually damages the heart’s ability to pump blood. Fluid can build up in the lungs as a result — a condition known as pulmonary edema. It is an increasingly common problem that can be fatal.

The Argentine Football Association confirmed Maradona’s death on Wednesday and posted a short message on its social media platforms.

“The Argentine Football Association, through its President Claudio Tapia, expresses its deepest sorrow for the death of our legend, Diego Armando Maradona. You will always be in our hearts,” it

Regarded as one of the greatest players in the history of the game, Maradona became a household name after inspiring his country to World Cup glory in 1986.

He took center stage at the tournament with a memorable performance against England where he scored an iconic goal that he later described as the “Hand of God.”

The diminutive forward out-jumped legendary keeper Peter Shilton and punched the ball into the net. Despite the obvious handball, the goal was allowed to stand because the referee did not see the foul.

Later in the game he scored one of the best goals in history after weaving his way past seven English defenders.

His glittering career was also marked by numerous controversies and his notorious lifestyle led to alcoholism and addiction.

Argentina’s President Alberto Fernandez announced three days of national mourning for the passing of the superstar, and posted a tribute to Maradona on Twitter.

“You took us to the top of the world. You made us feel incredibly happy. You were the greatest of all. Thank you for having existed,”

Maradona will lie in honor for public viewing at Argentina’s presidential palace, Casa Rosada, according to a statement published by the country’s official news agency, Telam.

Fans took to the streets across Argentina and in Naples on Wednesday to pay tribute to their hero.

Meanwhile, UEFA president Aleksander Čeferin said a minute’s silence would be observed ahead of all European matches this week in honor of the Argentine.

“He will go down in history as someone who set football alight and thrilled fans young and old with his brilliance and skill,” Čeferin said in a statement.

Maradona’s lawyer Matias Morla earlier told CNN that the star had died of cardiac arrest. Maradona’s family has authorized an autopsy to determine the official cause and manner of death, according to a source close to the soccer star. The official autopsy results have yet to be released.

Life off the pitch

Maradona broke into professional soccer with Boca Juniors but went on to play for leading European clubs such as Barcelona and Napoli.

He won two Serie A titles

with the Italian side which tweeted “Forever. Goodbye Diego” along with a blue heart.

When Maradona joined Napoli, one newsreader remarked, “the poorest city in Italy buys the most expensive player in the world.”

While his performances on the pitch dazzled, Maradona faced a number of demons off it.

During his time in Italy, he came into contact with the Camorra — the Neapolitan mafia — and struggled with addiction. He failed a drug test in 1991 and received a 15-month ban from the game.

A nomadic managerial career followed his playing years, taking him from Argentina to Mexico and the United Arab Emirates. Most recently, he coached Gimnasia y Esgrima in Argentina.

Earlier this month, Maradona underwent successful surgery for a subdural hematoma — more commonly known as a blood clot on the brain.

Tributes have flooded in with former clubs and players past and present paying their respects.

Fellow Argentine Lionel Messi, whom many saw as the modern-day Maradona, said it was a “very sad day.”

“He leaves us but he doesn’t go anywhere because Diego is eternal. I keep all the beautiful moments lived with him and I wanted to send my condolences and best wishes to all of his friends and family,” Messi wrote on Instagram.

Pelé, another legend of the game,

: “I have lost a great friend and the world lost a legend. There is still much to be said, but for now, may God give strength to his family members. One day, I hope, we will play football together in heaven.”

“One of the best ever. An unparalleled magician. He leaves too soon, but leaves a legacy without limits and a void that will never be filled. Rest in peace, ace. You will never be forgotten,” Ronaldo wrote on

“Our silence, our tears, our pain is the only thing we are feeling deep inside us at this time,” he said.

: “You will stay in the history of football forever. Thanks you for all the pleasure you gave to the whole world.”

: “Thank you for everything, Diego.”

While his influence on soccer will never be forgotten, Maradona transcended the sport.

A Vatican spokesman said Pope Francis “looks back with affection to the occasions of encounter in recent years and remembers it in prayer, as he has done in recent days since he learned of his health conditions.”

This story has been updated.

Gloria Steinem: The Woman Who Started It All (Lifetime Achievement Winner)

the Gloria Story – Born To Lose