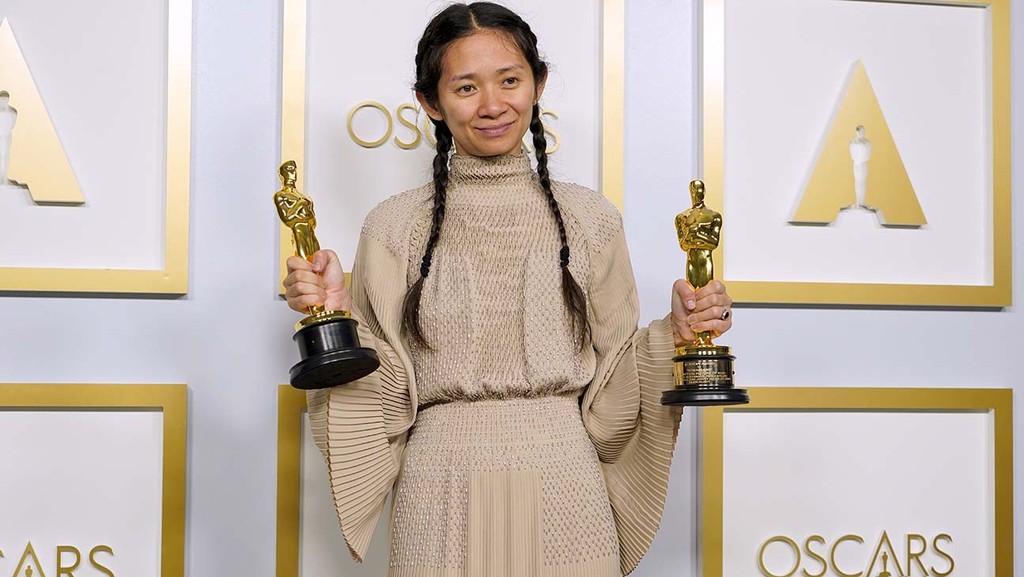 Beijing’s censorship apparatus has been suppressing the filmmaker’s award season victories ever since nationalistic internet sleuths unearthed an old interview she gave in which she made a passing remark that was interpreted as critical of her home country.

Chinese filmmaker Chloé Zhao’s Nomadland was the unmistakable big winner at the 93rd Academy Awards Sunday night, taking home best picture, best director and best actress. In a piece of potent history, Zhao became the first Asian woman, the first Chinese woman and first woman of color to win the top directing prize at the Oscars. Back in China, however, her moment of triumph was met with blanket silence from state and mainstream media.

In the hours immediately after the ceremony, neither China’s official mouthpiece The People’s Daily, state news service Xinhua nor the populist tabloid Global Times had produced a single report on Zhao’s multiple wins at the Academy Awards.

One of the exceedingly rare pieces of coverage, on private news site 163.com, actually used the occasion of her victory as an opportunity to not-so-subtly assert one of China’s most important — and contentious — geopolitical priorities. The two-line article stated that Zhao had become “the second Chinese filmmaker to win the best director Oscar, after Ang Lee.” The convention of both the Oscars and the world always has been to regard Lee, who was born and raised in southern Taiwan, as a Taiwanese filmmaker, not mainland Chinese. But Beijing regards Taiwan as a renegade territory and has vowed to reunite the democratically run island with the Chinese mainland in the years ahead — and by military means if necessary.

The suppression of Zhao’s Oscars moment initially didn’t amount to a total ban, however. Chinese social media services Wechat and Weibo hosted a moderate outpouring of praise for her during and after the Oscars, and videos of her acceptance speech initially went unblocked. Chinese film industry professionals were especially vocal on social media of their astonishment and gratitude for her achievement. But as Monday progressed, the censors began scrubbing out much of the discussion and shared footage, forcing fans to resort to coded and oblique references to Zhao’s success.

Chinese officialdom has long craved the Western cultural prestige that the Academy Awards confer. But the suppression of Zhao’s moment of glory in the Chinese press had been clearly telegraphed for weeks.

When Zhao won the best director award at the Golden Globes on Feb. 28 — another first for an Asian woman — the moment initially was as widely celebrated in China as it was in the U.S., with Chinese news outlets and social media users rallying around her as a source of national pride. Within a day, however, the mood dramatically darkened. Internet sleuths unearthed old interviews

in which Zhao appeared critical of her country, and before long, debate and vitriol over her “attitude towards China” was spreading just as fast as the adulation had. Beijing’s internet censors were next to enter the fray, blocking most publicity for Nomadland on social media. The film’s previously announced April 23 theatrical release plan was subsequently snuffed out. And for the first time in years, the Academy Awards ceremony went unaired in real-time in China (the show is usually streamed by state broadcaster CCTV and one of the country’s leading private streaming platforms).

The remark that seems to have stuck in the craw of Beijing’s censorship apparatus came in an interview Zhao gave nearly a decade ago to the small New York quarterly, Filmmaker Magazine. Describing the inspirations for her debut feature, Songs My Brothers Taught Me, about a Native American teen struggling to find his way on a reservation, Zhao said, “It goes back to when I was a teenager in China, being in a place where there are lies everywhere.”

The notion of a Chinese national winning an Oscar and getting no official adulation at home previously would have been unthinkable. In recent years, China’s state press has sought every opportunity to celebrate Chinese success at the Academy Awards, no matter how tenuous the connection. When Green Book won best picture in 2019, state news service Xinhua claimed the victory for China, noting that the film was co-financed by the film subsidiary of Chinese e-commerce giant Alibaba Group (despite the fact that Jack Ma’s internet conglomerate had zero creative involvement in the film). The propaganda outlet also claimed a portion of the glory for that year’s best animated short film, Bao, the charming story of a steamed Chinese bun, even though the film’s director Domee Shi, emigrated to Canada when she was two years old.

In that year, when no Chinese national was directly nominated, Xinhua said: “The 91st Academy Awards can be viewed as the starting point for a new period of growing influence for China in the international film industry. The medium of film proves to be effective in telling human stories that transcend national, political, and cultural boundaries. It is encouraging to see more Chinese companies, filmmakers, directors and actors using the medium well and playing an increasingly larger role in the ever-more interconnected global entertainment industry.”

In 2021, when China’s most internationally successful filmmaker in a generation produced a movie that claimed best film, best director and best actress, China’s state press, so far, has had nothing to add.