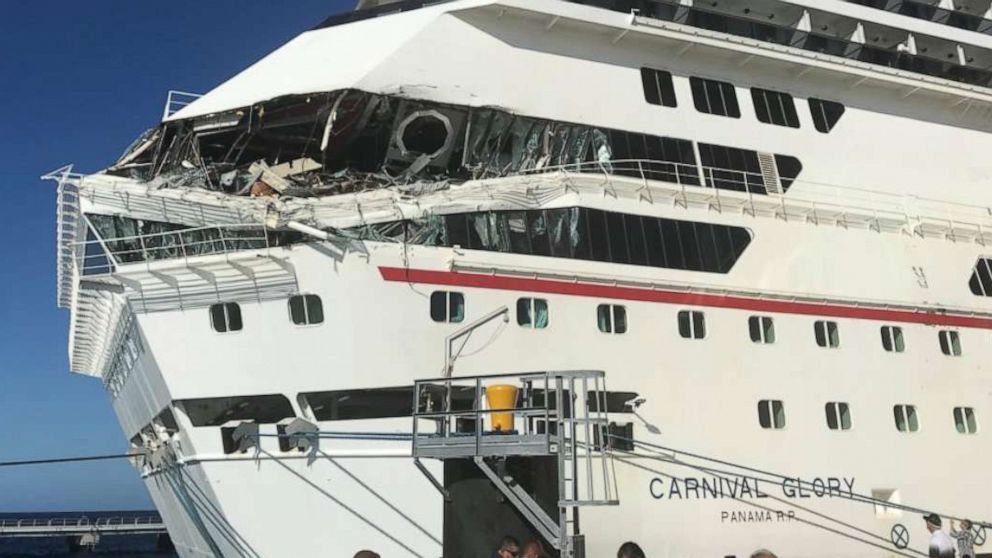 Six people sustained minor injuries after two Carnival Cruise Line ships collided Friday at a port in Cozumel, Mexico, according to the company.

Those injured presented themselves to the Carnival Glory medical center for evaluation following the incident, a statement from the cruise line read.

A Carnival Glory ship was attempting to dock in the morning when it hit a Carnival Legend ship, according to a statement from the cruise line.

“We are assessing the damage but there are no issues that impact the seaworthiness of either ship. We have advised guests from both ships to enjoy their day ashore in Cozumel,” the statement added.

Megan Skora was in her room aboard a nearby cruise ship when she heard the crash.

“I couldn’t believe my eyes seeing what I did,” Skora told ABC News, noting it was the “first time I’ve ever been scared on a cruise line.”

She said the passengers on the Carnival ships seemed “so calm.”

“I’m not sure the passengers on the ship

that crashed even knew what was happening,” Skora said.

The damage to Carnival Glory is seen after a collision with another cruise ship at Cozumel cruise port, Mexico, Dec. 20, 2019, in this image obtained from social media.

The damage to Carnival Glory is seen after a collision with another cruise ship at Cozumel cruise port, Mexico, Dec. 20, 2019, in this image obtained from social media.Jordan Moseley via Reuters

One witness video showed the collision, leaving parts of the Glory to crumble.

Royal Caribbean’s Oasis of the Seas was near the collision and almost hit, but a spokesperson for the cruise line told ABC News that ship didn’t sustain any damage.

The Carnival Glory was based in New Orleans and left the city on Dec. 15. It is still scheduled to depart Cozumel Friday and return to New Orleans on Dec. 22, a spokesperson told ABC News.

The cruise ship reaches 952 feet in length and can hold 2,980 passengers.