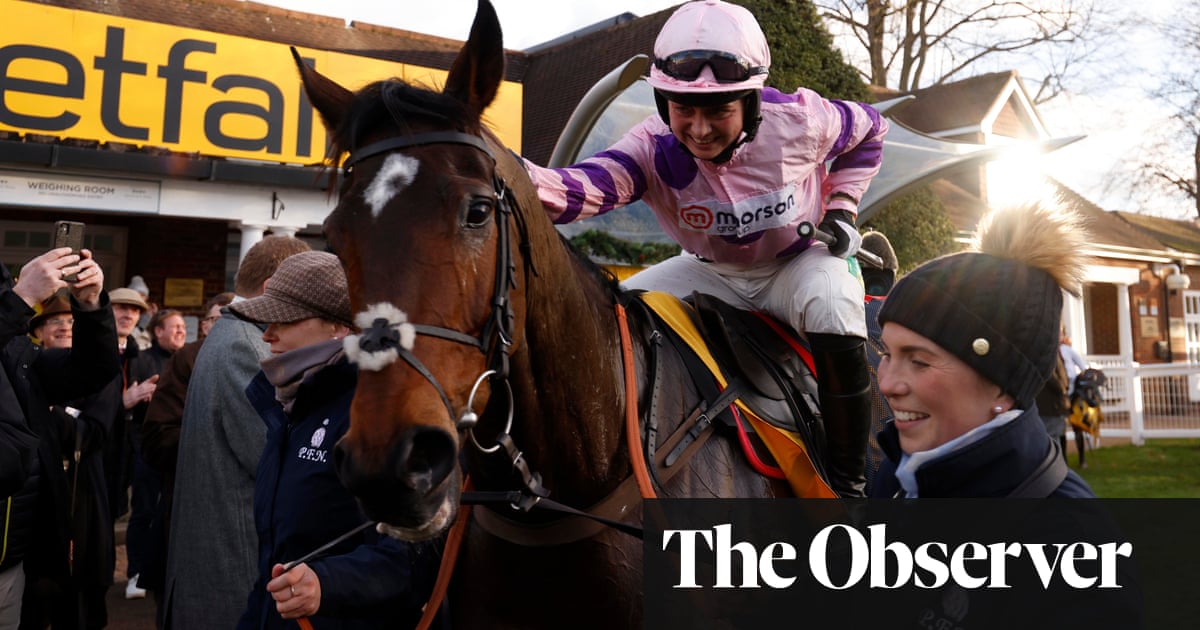 Four days after the ordeal of giving evidence about an alleged campaign of bullying and harassment against her by a fellow jockey, Bryony Frost received a rapturous reception from the packed grandstands at Sandown Park on Saturday as she was led back to unsaddle after winning the Grade One Tingle Creek Chase on the 12-1 chance, Greaneteen.

The hearing into Frost’s formal complaint against Robbie Dunne, which he denies, will continue on Tuesday. For now, though, Frost can reflect on another fine ride at the highest level, which brought the sixth Grade One success of her career.

Greaneteen was a 5-1 chance on Friday but drifted to double-figure odds before the off in the face of strong support for Willie Mullins’s Chacun Pour Soi, who set off as the 8-13 favourite.

For the second time in two trips to Britain, however, Chacun Pour Soi left his supporters out of pocket, making a couple of jumping errors before fading from three out. Greaneteen, by contrast, was always travelling smoothly and his rider sent him into the lead between the final two fences.

A fine jump at the last extended his lead and though he drifted left on the run to the line, he was running on again for his rider in the half-furlong, beating Hitman – a stable companion at the Paul Nicholls yard – by five-and-a-half lengths.

“I can’t tell you what it means,” Frost said. “I was nearly in tears coming in. To feel the support of everyone here is huge, I could hardly talk to Alice [Plunkett, of ITV Racing] coming in because I wanted to appreciate everybody.

“When I landed after the last I thought somebody was going to come and get me. I could hear them and the crowd and I thought ‘Oh my God. Someone has to get me’. He jumped and he travelled and It’s absolutely brilliant.

“Being on the back of a horse is the most blissful place you can be. You get to go out there and you jump and gallop and enjoy yourself. You let your thoughts go to the side and there’s no other place like it, when you’re gunning for him and he’s gunning for you and you leave everything out there and ride and aim for that winning post.”

Nicholls has spent the past 10 days self-isolating after testing positive for Covid-19. “It has been the worst 10 days of my life,” he said, “but it is nice to come back to this.

“It has been a difficult week for Bryony but she has handled it well and I don’t think any of us would like to be in that position. But when you come back in and ride a Grade One winner, that says everything about how professional she is.”