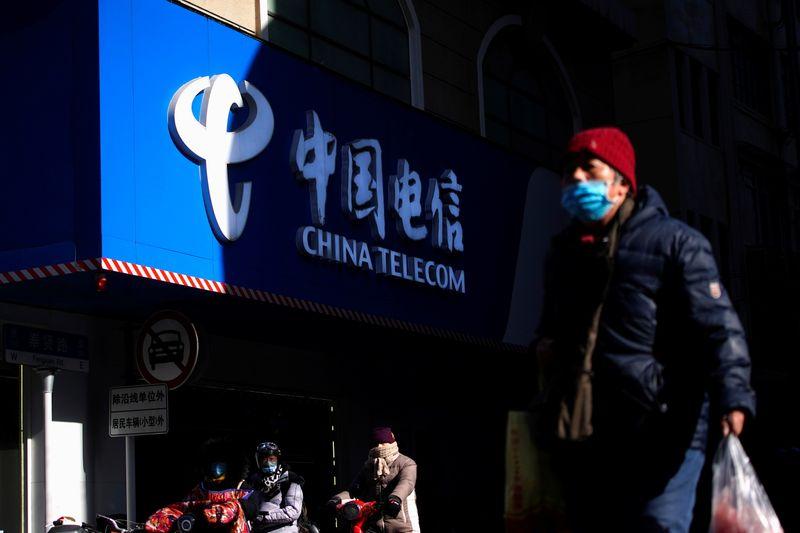 A sign of China Telecom is seen on a street, during the coronavirus disease (COVID-19) outbreak in Shanghai, China January 8, 2021. REUTERS/Aly Song – RC2H3L9F1C49

TRIUMPHANT RETURN. China Telecom looks set to get a strong reception in Shanghai. On Tuesday the state-owned wireless carrier announced plans to sell up to 12 billion shares, equivalent to 13% of the enlarged capital, through a secondary listing on the city’s bourse – two months after being delisted in New York. Investors cheered the decision, sending its Hong Kong-listed shares up as much as 9.8% on Wednesday.

That may look understated once the telco giant goes live in Shanghai – the first of the Chinese companies blacklisted in the United States to seek to do so. The Beijing government can encourage other state entities to buy stock. And China Telecom currently trades at just 8 times forecast earnings for the next 12 months, Eikon data show, compared to 22 times for its closest competitor China Unicom’s Shanghai-listed entity. Closing even part of that gap would handily compensate for its dropped U.S. connection. (By Yawen Chen)

Reuters Breakingviews is the world’s leading source of agenda-setting financial insight. As the Reuters brand for financial commentary, we dissect the big business and economic stories as they break around the world every day. A global team of about 30 correspondents in New York, London, Hong Kong and other major cities provides expert analysis in real time.