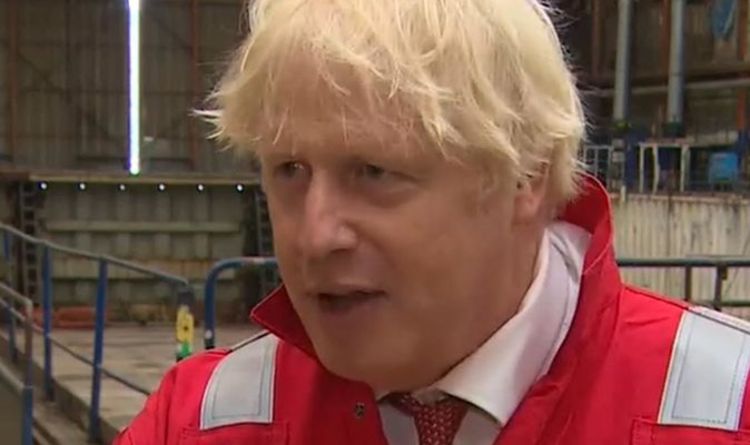 We will use your email address only for sending you newsletters. Please see our Privacy Notice for details of your data protection rights.

Boris Johnson called for an end to “cringing embarrassment about our history” after the BBC decided to strip lyrics from traditional Last Night of the Proms favourites such as Land Of Hope And Glory. The broadcaster revealed details of its schedule for the Last Night event after reports that anthems Rule, Britannia! and Land Of Hope And Glory could face the axe over their perceived association with colonialism and slavery. On Monday night, the BBC issued a statement saying the two songs would be performed by the orchestra, but without singing during the September 12 concert.

Mr Johnson told reporters: “I was going to tweet about this. I just want to say and they’re trying to restrain me from saying this but if it is correct which I cannot believe it really is.

“If it is correct that the BBC is saying that they will not sing the words of Land of Hope and Glory and Rule, Britannia! as they traditionally do at the end of Last Night of the Proms.

“I think it’s time we stopped our cringing embarrassment about our history, about our traditions, about our culture and we stop this general bout of self-recrimination and wetness.

“I wanted to get that off my chest.”

READ MORE: BBC backs down: Rule Britannia will NOT be cut from BBC Proms

Boris Johnson erupted at the BBC over their decision to not sing the words of Rule Britannia (Image: SKY)

The BBC said there had been “unjustified personal attacks” on social media on Finnish conductor Dalia Stasevska, who will be at the helm of the Last Night this year.

“Decisions about the Proms are made by the BBC, in consultation with all artists involved,” it said.

There will be no live audience to sing along and wave flags because of coronavirus restrictions.

The national anthem will still be sung during the event, which will air on BBC Radio 3 and on BBC One and feature soprano Golda Schultz and the BBC Symphony Orchestra at the Royal Albert Hall in London. A new arrangement of Jerusalem will also be included.

The BBC said: “The Proms will reinvent the Last Night in this extraordinary year so that it respects the traditions and spirit of the event whilst adapting to very different circumstances at this moment in time.

“With much reduced musical forces and no live audience, the Proms will curate a concert that includes familiar, patriotic elements such as Jerusalem and the national anthem, and bring in new moments capturing the mood of this unique time, including You’ll Never Walk Alone, presenting a poignant and inclusive event for 2020.

“The programme will include a new arrangement by Errollyn Wallen of Hubert Parry’s Jerusalem alongside new orchestral versions of Pomp And Circumstance March No 1 Land Of Hope And Glory’ (arr Anne Dudley) and Rule, Britannia! as part of the Sea Songs, as Henry Wood did in 1905.”

Rule Britannia: Why Symphony Orchestra conductor wanted to scrap song [INSIGHT]BBC accused of being ‘hopelessly out of touch’ over Rule Britannia row [ANALYSIS]

Boris Johnson called for an end to “cringing embarrassment about our history” (Image: GETTY)

Earlier, a Number 10 spokesman said Mr Johnson believes in tackling the “substance” not the “symbols” of problems after the Sunday Times reported that the songs could face the axe.

“This is a decision and a matter for the organisers of the Proms and the BBC,” the spokesman said.

“But the PM previously has set out his position on like issues and has been clear that, while he understands the strong emotions involved in these discussions, we need to tackle the substance of problems, not the symbols.”

Culture Secretary Oliver Dowden tweeted: “Rule, Britannia! and Land of Hope and Glory are highlights of the Last Night of the Proms. I share concerns of many about their potential removal and have raised this with (the) BBC. Confident forward-looking nations don’t erase their history, they add to it.”