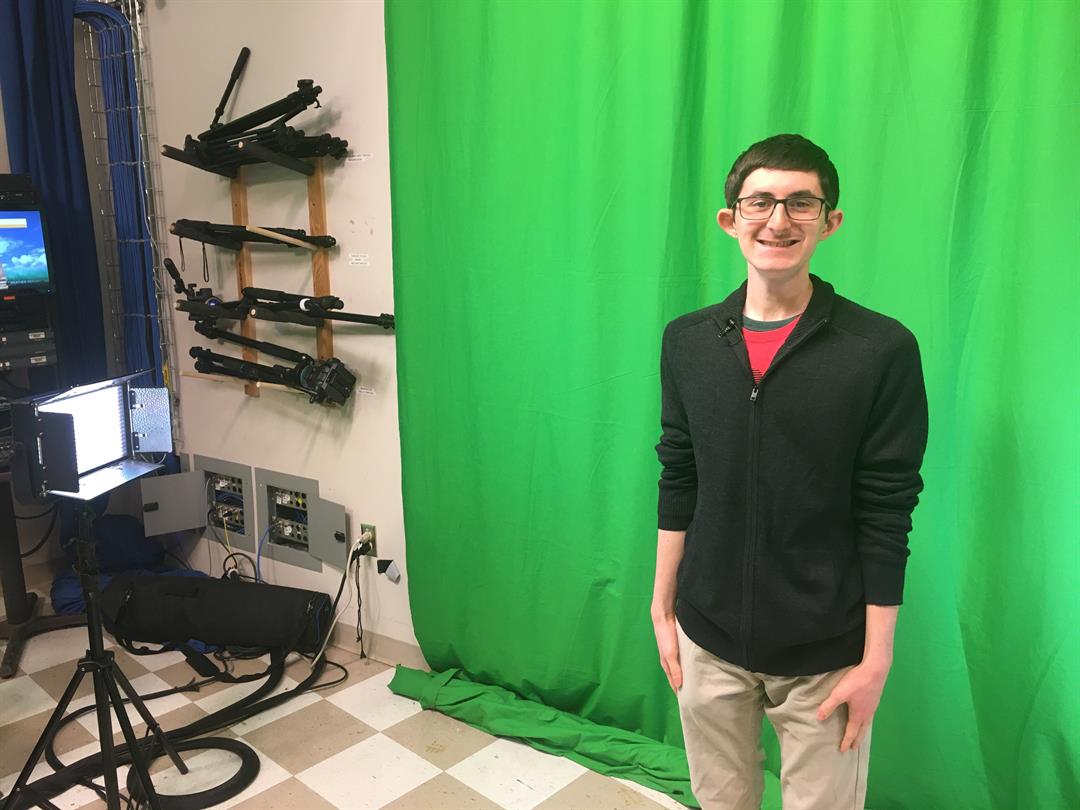 As a student with autism, Anthony Steiner never wanted the spotlight as a child. Now, he’s a regular on stage and in front of the camera at Boardman High School.

Boardman High School puts together a newscast featuring students. For one of them, doing the weather is worth celebrating.

“He’s an overcomer,” said Anthony’s mom Kristin Steiner. “We tell them that all the time.”

Autism has been an obstacle, but one he’s proven time and time again does not define who he is.

“I dreamed about becoming a film director,” said Anthony.

He’s always had a passion for movies and performing, especially for his brother.

“His younger brother couldn’t talk until he was six,” said Kristin. “Anth was really good at remembering all the words to their favorite movies and shows. And so if his younger brother Joe wanted him to remember something, he would just push him, and Anthony would come out with just whatever his brother wanted to hear, and he could do it right in character.”

When it came to doing that in public, that was a tougher process.

Linda Knox has been Anthony’s aide for the past eight years in the Boardman school system.

“When I first got him back in fifth grade, to get him to go up in front of a class or to speak in front of a class, it was like ‘come on Anth.’ You had to push him to get up there,” said Knox. “Then, once you did, I had to be standing right next to him to give him that security.”

But in 8th grade, he earned a big role in Boardman’s production of the Lion King. Suddenly, that Anthony that his parents had seen perform behind closed doors was on display for everyone.

“When he played Timon, definitely one of the highlights of his life. So much of the community rallied around that experience,” said Kristin. “We saw the lights turn on. We call it his glory moments because he could feel that.”

When he joined BSTN, Boardman High School’s television station, everyone knew that at some point, he’d be in front of the camera.

Now, as a senior, he’s checked that one off his list as well.

When the day arrived this past fall to make his debut, he wasn’t the only one excited; his entire school was filled with anticipation.

“I knew that he had been waiting to do it, waiting to do it. When we finally got to that day, he got up there in front of the camera. All of his peers were like, today’s the day, man,” said Boardman teacher and media director Chris Clones.

“When the weather was aired here for the first time, and he was on it, we were in first period math class. The class just erupted, and everybody started cheering,” said Knox.

“It’s what you hope for, and then when you put yourself in the atmosphere, you come with a little bit of fear; what am I going to see? What am I going to feel? Their interaction and their genuine support for him is such a gift. It’s something we didn’t know if we’d ever see, and we are so thankful that we see it,” said Kristin.

For Anthony, he’s living life one glory moment at a time and making a whole community proud.

“If you had asked me back in kindergarten, ‘what kind of experience do you think he’s going to have growing up through the school years?’ there’s no way I would have thought, oh he’s going to be a weatherman, he’s going to be on stage, all this stuff,” said Kristin. “He’s taken our expectations and exceeded them tenfold.”

While overcoming his own challenges, he’s also raised the bar on what’s possible for everyone around him.

Anthony’s continued to make appearances on stage, performing with Crown Theater Productions in Columbiana. He’s also made two TV appearances as a weatherman, finishing his weathercast just before winter break in style, signing off by singing while wishing everyone a Happy New Year.

His plans for the future include attending Youngstown State University, where he’s already been accepted as a student for the fall. He will head to campus undeclared but is considering a major in a field related to graphic design.

You can see Anthony’s full weathercasts on the BSTN YouTube channel. His broadcast dates were November 22nd and December 13th.