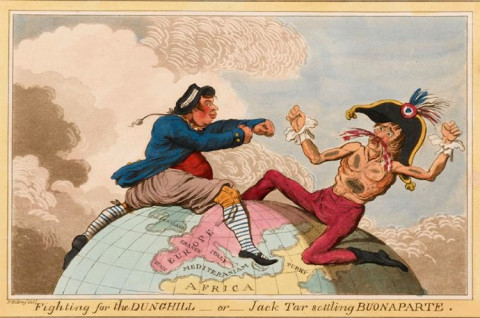 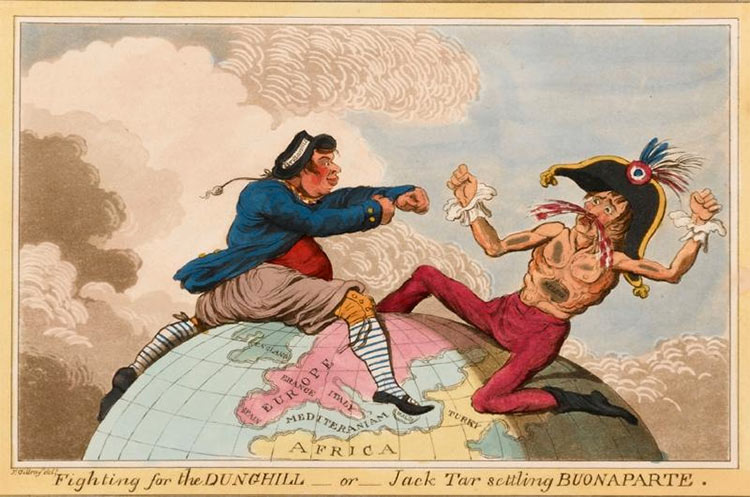 The May edition of History Today featured a piece from the group Historians for Britain, formed of many well-known scholars. It opened with the statement that Britain needed to redress its relationship with the EU, which, it conceded, was somewhat more like ‘a political manifesto than a series of historical arguments’. The group aims ‘to show how the United Kingdom has developed in a distinctive way by comparison with its continental neighbours’.

What might be termed, in such a context, as Britain’s ‘island identity’ is interesting as part of a larger whole: the way it emerges in early settlements, sharpens distinctly with the Roman invasion and is heightened during the Anglo-Saxon period, as seen in the preoccupation with comitatus and exile. Shakespeare, Daniel Defoe, Delarivier Manley and Samuel Johnson all engaged with developing ideas of British identity through our early modern era. In the 19th century the rapidly-coalescing idea of a certain type of Britishness was woven into public and private life and by time we hit the World Wars it was a finely tuned propaganda tool turning our very soil and beaches into tangible frontiers. The recent fearsome political and media emphasis upon immigration shows how seriously many still take the subject of those borders. But Britain (and I use Britain, here, to define our collected nations’ dynamic relationships before and after the Acts of Union), while physically separate from Europe, has never developed in isolation from it, or from the rest of the world. Its development is distinctive, insomuch as all national identities are distinctive and wars, occupations and shifting borders have influenced mainland European national identities differently, although European regional identities remain as complex and divided as those collected under the Union flag.

A counter-argument, in favour of an inclusive view of Britain’s place in Europe, was made when History Today subsequently published an open letter addressed to Historians for Britain, signed by many of Britain’s respected academics. The letter argued in favour of an inclusive view of the British relationship with Europe. I lack an opinion on either stance as far as current political situations are concerned: the historian’s job, as I see it, is not to apply personal opinion to the past, but to unpack the minutiae of our chosen subject, seek the truths contained therein and the perspective those truths lend to the understanding, growth and collective intelligence of society.

Historians for Britain proposes taking a certain notion of Britain’s ‘uniqueness’ and using it to influence current political thinking as an EU referendum looms. For reasons too obvious to need stating here, this is problematic. However, the ‘inclusive’ and opposing reaction is also problematic, appearing as it does to adopt a current pro-EU stance using well-meaning and yet ultimately formless arguments drawn from the extensive back catalogue of British (namely, English) hypocrisy and unpleasantness over the course of the last nine centuries. Questions of identity are by nature emotive, but the historian’s job is not about the ‘sides’ or ‘teams’ and it is certainly not about hashtag tokenism. If we stray from the analysis of our necessarily specialised areas of study, shouldn’t it be to contribute as individuals to informed debate? The Historians for Britain assertion that historians should engage and inform political debate is a timely and reasonable one. But currently, either way, what does adding your name to a list from behind a screen at a desk even mean? Is this the true reflection of what we want our work to achieve?

Labouring under the glory or the guilt of British history is as reductive and futile as the research and understanding of that same history is valuable and to see it only in terms of a past and future relationship with mainland Europe seems remarkably insular. Perhaps this is partly the result of the fact that we no longer provide, as a part of a solid scholarly education, the contextual framework necessary for the understanding of religions, antiquity, long-term cycles of continuity and change and the very nature of ‘globalism’ at a time when it is so sorely needed: ahead lies a reality of European intra-national tribalism in the face of massive migration and a savage polarity between East and West.

The historians of our near future will have to make sense of seismic shifts in the daily realities of sexuality and gender across the world; the human, societal and cultural aberrations of IS and Boko Haram; the moral ramifications of ‘drones’ and ‘digital’ on warfare and privacy and ruptures in international control over natural resources as wealthy countries take out leases on disorganised and corrupt ones. If British historians are to enter the forum of political debate should we not be looking at what the history of Britain, a country that for better or worse possesses a global past, can offer us in making sense of this future? To do otherwise is to squabble among ourselves over tidying a messy communal kitchen as, around us, the house begins to burn.

Lucy Inglis is a historian and novelist and author of Georgian London: Into the Streets (Viking, 2013).  www.lucyinglis.com

Real estate for the apocalypse: my journey into a survival bunker | News