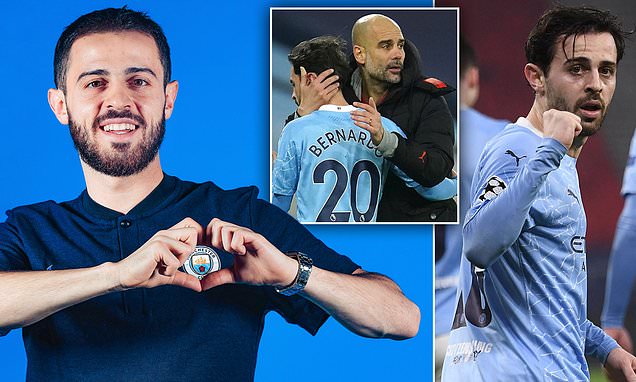 Pep Guardiola only spent a quarter of an hour working on his tactics to beat Manchester United in their own back yard a few months ago.

Manchester City went there with two false nines, Riyad Mahrez and Kevin De Bruyne, and headed back across town having comfortably seen off their rivals. A 15-minute sermon on the morning of that Carabao Cup semi-final was enough to drill down into specific instructions.

They had played similarly before on occasion, perhaps most notably at Real Madrid in last year’s Champions League, but in January, with both senior strikers recovering from injury or coronavirus, the need was more pronounced. Guardiola liked what he saw.

What followed was them operating with a false nine in a healthy portion of games you might categorise as ‘big’ from that night at Old Trafford until this point.

Certainly it was the manager’s club of choice for European knockout victories over Borussia Dortmund and Paris Saint-Germain and plays to the idea that his perfect XI is one almost entirely made up of midfielders. Guardiola is fortunate not only to have quality but also intelligence across the board.

Men like Bernardo Silva, whose utility has sometimes been to his detriment yet now makes him invaluable in this tweaked version of Guardiola’s City. Silva has been used as a false nine, central midfielder, quasi-full back and on both wings since January. Sometimes all in the same fixture.

The truly top players, of which he is one, grasp concepts quicker than their counterparts, although even they can take a little time to adjust. Knowing the exact timings of Guardiola’s dance takes a serious amount of concentration.

Silva has been used as a false nine, central midfielder, quasi-full back and on both wings

If opponents are left dizzy by the constant movement and variations during games, then so too are Guardiola’s players, and the short address before United suggests they are in part left to figure it out for themselves.

‘It’s tough, to be honest,’ Silva says. ‘It’s easier to just play in one position! Then you know everything you have to do in each situation. When you play on the left or right, then through the middle, it’s a bit tougher. But you grow as a player. It has made me a better player but of course, sometimes it is not easy. We keep changing and switching through games.

‘Imagine I play 10 games in a row as a centre-right midfielder, I start finding my routines. Then if Pep plays me as a false nine, I need to find new routines because the game demands different things in that position. I’m kind of used to it now. You adapt as fast as you can. It’s worked this season. We want to get that Champions League trophy back to Manchester. That would be very special.’

City’s semi-final second leg with PSG was snow-capped. A standard May evening in Manchester. A canvas of the Etihad pitch painted before groundstaff shovelled snow from the surface at half-time might well have been welcome at the Louvre, such were the patterns and positional rotation on display.

‘You need players who are able to keep switching, to find those empty spaces,’ Silva says.

‘I’ve had some very good dressing rooms and some very bad ones as well. I won’t tell you which ones. This Manchester City dressing room is really, really good. We all try to help the others. There is no jealously. We are not jealous of each other. We compete to keep the standards and intensity high but we are happy when our mates does something well.’

That is perhaps best summarised by their list of top scorers this term in the absence of a fully fit Sergio Aguero. Ilkay Gundogan leads the way on 17 and another six have reached double figures. The goals have been shared, a consequence of Guardiola’s tactics and also his rotation in selection from game to game.

It is striking therefore that, while Gundogan took the public plaudits for his contribution in redefining City’s season after New Year, Silva was earning internal praise. The 26-year-old, back in Portugal for what he describes as a ‘special’ occasion, was only rested for three of City’s astonishing 21-match winning run.

When De Bruyne was missing through injury for a month, it was Silva and Gundogan who stood up and took creative responsibility. Silva’s numbers are not comparable to plenty of others but Guardiola recognises the stitching he performs in midfield. Noticeably, when to speed up games or slow them down. Nobody has completed a higher percentage of passes in the final third than him.

‘For me – honestly – I really don’t care about the statistics. January and February were great. I had a few months in my second season that were good as well!’

Silva is right, he was often unplayable off the right in that second season when City became the first team to defend a league title for a decade, ultimately picking up the club’s Player of the Year award and typically flabbergasted to do so. When life was good, when he felt at home in a city-centre apartment. But football can change.

City staff noticed an alteration in his mood – be it because of personal circumstances or something else – and performances dipped. Guardiola consistently maintained that Silva would come again and has been proven correct.

‘Pep was always been honest with me,’ Silva says. ‘He knows I’m always honest with him. We have a great relationship and that helps.

‘He just kept telling me where I had to improve. Sometimes it doesn’t happen as fast as I want. Sometimes physically you’re not as good as you want to be. Sometimes emotionally you’re a little bit tired of football.

‘When you win, it’s always easier, right? I’m a bit of a sore loser. I’m not used to it. The reality is I’ve got used to winning a lot. The feeling of losing wasn’t nice.’

The point Silva makes regarding his physicality is salient. It’s not as if he will ever grow taller than 5′ 8″ and that diminutiveness hampered him when coming through Benfica’s academy until he worked enough to overcome it. And that has gone up another few notches at City. Silva, who intimated that City’s medical staff wanted him to build more muscle, has evolved into the terrier dressed in silk.

‘I’ve always been energetic but I remember when I was younger, I could run with this intensity for 60 or 70 minutes and then I was tired. Over the years, I started getting a bit stronger and now I can go like this for 90 minutes. I’m a better presser now.

‘I’ve had some managers that, because of my qualities, said I shouldn’t defend as much as others. But I always thought that was a mistake. I have to work as much as everyone else. I grew up a lot at Monaco, and with Pep as well. At City, if you don’t run, you don’t play.’

The untold story of Calif Records