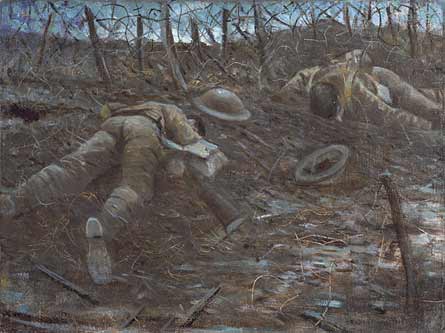 In the casualty-heavy battlegrounds of World War One, bodies were frequently left unattended and unburied. In one of Nevinson’s most famous paintings, we see the bodies of two dead British soldiers. The painting was officially censored but still exhibited by the artist during the war. The title is a quote from ‘Elegy Written in a Country Church-Yard ‘ by Thomas Gray. The so-called ‘Paths of Glory’ have led these soldiers to death in a wasteland, imprisoned by barbed wire. Faces down, like the child, they are unrecognisable, slowly decomposing into the landscape.

Whereas the poet reflects on the mouldering bodies, dead and buried in a church-yard, these soldiers have been left unattended, chanced upon by the artist and therefore presumably behind the Allied lines: their bloated and putrefying bodies appearing to float at the side of the road. Have they been forgotten? Or, are there too many others and too few resources to deal with them? Or, does no one care anymore and has the will to bury them gone? There are no clues to the actual battle, but does this even matter? It could be anywhere on the front line, on any day.

I Tracked Everything My Baby Did Until Nothing Made Sense Anymore