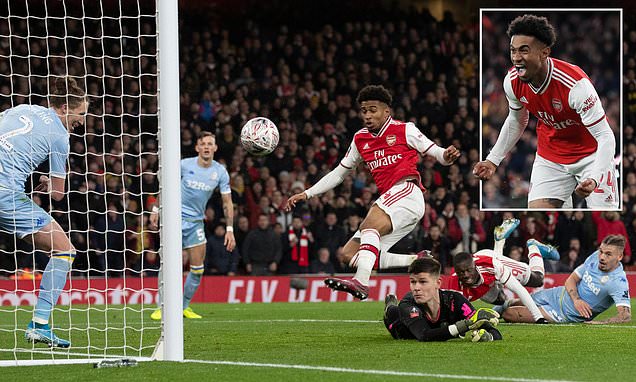 There will be no FA Cup glory for Marcelo Bielsa this season but his emerging Leeds team left London with their reputation enhanced.

If they go on to win promotion this season then the Premier League have been warned.

Arsenal will certainly not forget how they were dominated by the Championship leaders in the first half at the Emirates Stadium.

Mikel Arteta’s side survived intense early pressure, rode their luck at times, showed the desire to cling on to their credit and improved after the interval.

Reiss Nelson scored the only goal, 10 minutes into the second half, which sends them into a fourth round tie away at Bournemouth.

When Sokratis smothered a threatening break by Jack Harrison and Rob Holding blocked a cross in the closing minutes the Arsenal defenders clenched fists and punched the air as if they had scored goals.

These are promising signs for Arteta four games into his tenure and he is keen to inject desire into the team.

And for the future of club which has won the FA Cup 13 times, more than any other.

Leeds will return to rigours of a promotion campaign with a Yorkshire derby against Sheffield Wednesday on Saturday and with the look of a Premier League team in the making, even if this defeat extended a stuttering run of form to just one win in six games.

They totally outplayed Arsenal in the first half-an-hour and summoned 11 shots in the opening 25 minutes.

By half-time they were up to 15 attempts but could not find the net and were punished by their Premier League hosts.

The closest they came was an effort from Patrick Bamford, crashed against the bar in the first-half, and afterwards Bielsa lamented the missed opportunities. ‘We allowed the opponent to react,’ said the Leeds boss.

Arteta ripped into his players during the interval and shook them from their careless and lethargic first-half performance, one which bore the hallmarks of the early-season woes under Unai Emery.

Roared on by 9,000 in the away end, Leeds could easily have taken an early grip of the tie.

They were confident and committed, making life uncomfortable for Arsenal, biting into tackles and swiftly

They fully understand what is demanded by Bielsa. Playing against them was ‘like going to the dentists’, according to Arteta.

Jack Harrison, on loan from Manchester City, forced Emi Martinez into his first save of the night and Bamford rattled the frame of the goal after linking up with Luke Ayling.

Martinez escaped as he failed to claim a dangerous in-swinging free-kick delivered by Kalvin Phillips, Holding cleared the rebound and Arsenal breathed again.

For all their quality, the Premier League side struggled to impose any element of control and were limited to offering only an occasional threat on the counter-attack.

Nineteen-year-old Illan Meslier made a comfortable save in the opening moments to deny Nicolas Pepe from 25 yards.

Ezhjan Alioski climbed above Sokratis to reach a cross from Ayling. It looked like a foul by the Leeds winger but one wasn’t awarded by referee Anthony Taylor and Martinez flew into another save, clawing the ball away from the top corner.

For Arteta it was the reversal of the pattern of recent home games when he has seen his team start with energy and intent. Here, they were on the back foot and finding it difficult to hit their stride against fluent opponents.

David Luiz headed wide from a corner before the recovery in the second half, signposted by Nelson who produced a burst of acceleration which took him clear but he was unable to find a finish before he was crowded out by recovering Leeds defenders.

Another run, this time by Granit Xhaka, drew a foul on the edge of the penalty area and Alexandre Lacazette, wearing the captain’s armband in the absence of Pierre-Emerick Aubameyang, clipped the top of the bar with a curling free-kick.

Arsenal manager Mikel Arteta shakes hands with the match winner, Nelson, as he is substituted in the second half

Lacazette drew another save from Meslier who dived low to his left, and Matteo Guendouzi flashed a shot wide.

Arsenal pressed higher up the pitch and found a healthier tempo in the second half, which enabled them to get their better players on the ball, although Leeds were always dangerous. Bamford broke with purpose and extended Martinez again before the fell behind.

Pepe launched the move with a turn in midfield and pass to Lacazette on the right.

Gaetano Berardi slid in, attempting to intercept the cross but only succeeded in diverting it towards the back post where Nelson arrived to convert despite the best efforts of Meslier and Ayling on the line.

It was his second competitive goal for Arsenal and would prove decisive.

Bielsa reacted with a double change but the Premier League team were on top and almost extended their lead with Sokratis and substitute Gabriel Martinelli both going close.

Arsenal move on in the competition but will not be surprised if Leeds are back in the Premier League next season.