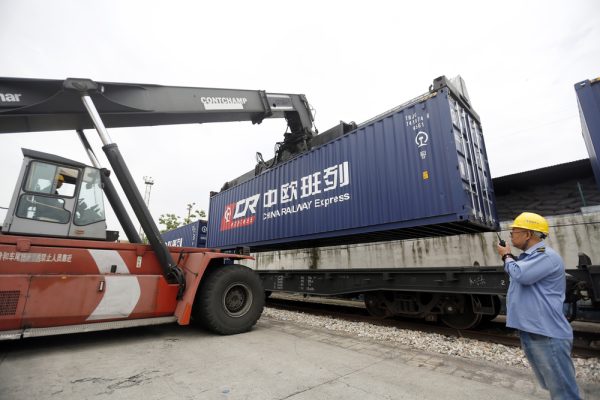 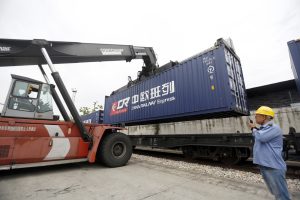 A Chinese worker directs another to load a container onto a freight train bound for Europe at a railway station in Shanghai, China, May 16, 2017.

Six years ago many China watchers, including this one, were forecasting that China and its closed, centrally-planned economy were in peril. Borrowings were too high and the mega-projects it was announcing under its Belt and Road Initiative (BRI) were just too much.

At that point Vietnamese officials were warning that “any changes in the global economy would have huge impacts on developing countries like Vietnam, Laos, Cambodia, and Myanmar.”

But the world’s second largest economy did not implode. Beijing’s answer – though hardly original – was to borrow more, lend more, and print more money, and on a breathtaking scale.

M2, or cash in circulation, began rising substantially in 2015 as the government injected huge sums of money into the economy through renminbi loans, prompting a note to clients from Deutsche Bank warning this was “unsustainable” and threatened “financial stability.”

Much of that went into BRI infrastructure projects ranging from highways and ports to railroads and dams, but the contracts and terms were notoriously oblique, leading to charges of Chinese debt traps being laid in foreign lands, which would enable Beijing to seize strategically important assets.

According to the American Enterprise Institute, signed BRI contracts were worth $46.54 billion by 2020, with ASEAN grabbing the lion’s share of 36 percent. However, the latest independent numbers provide perhaps a clearer picture.

A report by AidData, a research lab at the College of William and Mary, found China had loaned $843 billion to finance more than 13,000 projects to 165 countries over 18 years. Of the recipients, 42 countries carry debt to China exceeding 10 percent of GDP, including Cambodia and Laos.

Get briefed on the story of the week, and developing stories to watch across the Asia-Pacific.

Most loans were tied to the BRI, and the reality is setting in with many an analyst, including the cheerleaders, saying the initiative’s glory days are over.

It’s a point that’s being driven home by the debt-laden property firm Evergrande, which holds $305 billion worth of liabilities. Regulators are warning of a systemic risk to the Chinese economy if its second-largest property developer fails to meet its debt obligations.

Another headache is Beijing’s decision to scrap construction of coal-fired power plants abroad, impacting some 600 planned coal powered units. This announcement was deservedly welcomed by all concerned with climate change. But it was also a sudden move and will upset the region’s short- to medium-term energy needs.

China is expected to meet its BRI obligations, an initiative that will remain a cornerstone of Beijing’s foreign policy. But as Kaho Yu, principal analyst in Asia politics and energy at Verisk Maplecroft in Singapore, recently noted, BRI spending has been slowing since 2018.

It’s a situation that has worsened further through significant delays in BRI infrastructure projects caused by the COVID-19 pandemic, all with a dose geopolitical tensions added into the mix.

That has stressed-out cash-strapped ASEAN governments who want China and its BRI to underpin a recovery of their pandemic-ruined economies over the coming years.

That was followed by a rare meeting of leaders from Cambodia, Laos, and Vietnam in Hanoi, a mini-summit that was widely seen as an attempt by the Vietnamese to shore up old alliances that have been fractured by China’s regional political and economic power-plays.

Free trade agreements with Beijing are being discussed and ratified and this could help to a point, but at the end of the day it’s the Chinese economy and the red ink that’s being splashed about which matters, and it is far from encouraging.

Luke Hunt can be followed on Patreon and Twitter.

Descargar revistas de libros electrónicos Someone Who Will Love You in All Your Damaged Glory: Stories :: Xilackixy

Book Review: Looking at the Flipkart story with a dispassionate eye