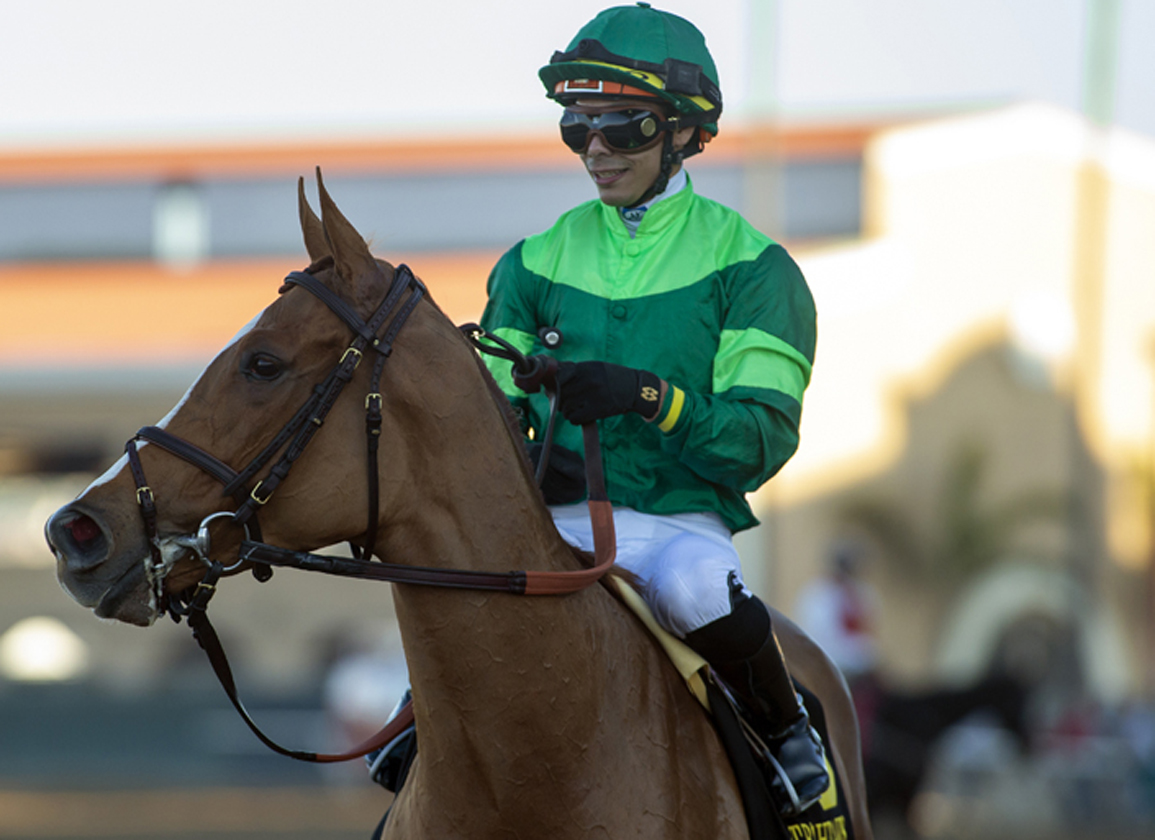 Regal Glory (Animal Kingdom), purchased by Peter Brant’s White Birch Farm for $925,000 at this year’s Keeneland January sale, went wire-to-wire to earn her first Grade I victory and give trainer Chad Brown and jockey Jose Ortiz their second graded winner on the closing-day card at Del Mar in the GI Matriarch S. Sunday. Sent off the 8-5 second choice, the 5-year-old chestnut mare rushed up from her outside post to grab the lead into the first turn. She was unchallenged and running freely through fractions of :24.06 and :48.50, skipped further clear on the far turn and was unchallenged to the wire.

“I thought I’d have the lead and thought I was the only real speed in the race,” Ortiz, who also rode the Brown-trained Verbal (Flintshire {GB}) to victory in the GIII Cecil B. DeMille S. Sunday, said. “The horse inside [Princess Grace] has speed, but when she used it last time, she didn’t finish. So I thought I’d be out front and it worked out just that way. We got away with some easy fractions and then she had lots for the finish.”

The victory was Brown’s fourth in the eight runnings of the Matriarch conducted at Del Mar.

“Just go to the lead. That’s what my boss told the jockey,” said Brown’s assistant Jose Hernandez. “That was the plan. She’s a really nice filly and she did it all. They all [Chad Brown’s seven horses to race at Del Mar over the holiday weekend] go back to Kentucky on Tuesday and then to Florida.”

The consistent Regal Glory, who has been first or second in all but three of her 16 lifetime starts, won the GIII Lake George S. and GII Lake Placid S. over the Saratoga lawn in 2019 and added a graded victory in the GIII Kentucky Downs Ladies Turf S. last September.

Purchased by Brant from the dispersal of the late Paul Pompa, Jr. at Keeneland in January, Regal Glory won the Apr. 11 Plenty o’ Grace S. in her first start for her new owner. A troubled fourth in the June 5 GI Just a Game S., she returned to the winner’s circle in the Aug. 8 De La Rose S. at Saratoga and she was coming off a runner-up effort behind stablemate Blowout (GB) (Dansili {GB}) in the Oct. 9 GI First Lady S. at Keeneland.

Multiple graded stakes winner Mary’s Follies is also the dam of graded stakes winner Night Prowler (Giant’s Causeway) and Japanese Group 1 winner Cafe Pharoah (American Pharoah)   The mare produced a colt by Connect in 2020 and, after aborting in 2021, was bred back to American Pharoah. She sold to BBA Ireland for $500,000 at Keeneland January this year. Her Connect yearling, purchased by Larry Best’s OXO Equine for $185,000 in January, RNA’d for $425,000 at this year’s Keeneland September sale.

Ambitious Prince out to trump Tavion Prince in Lismore Cup