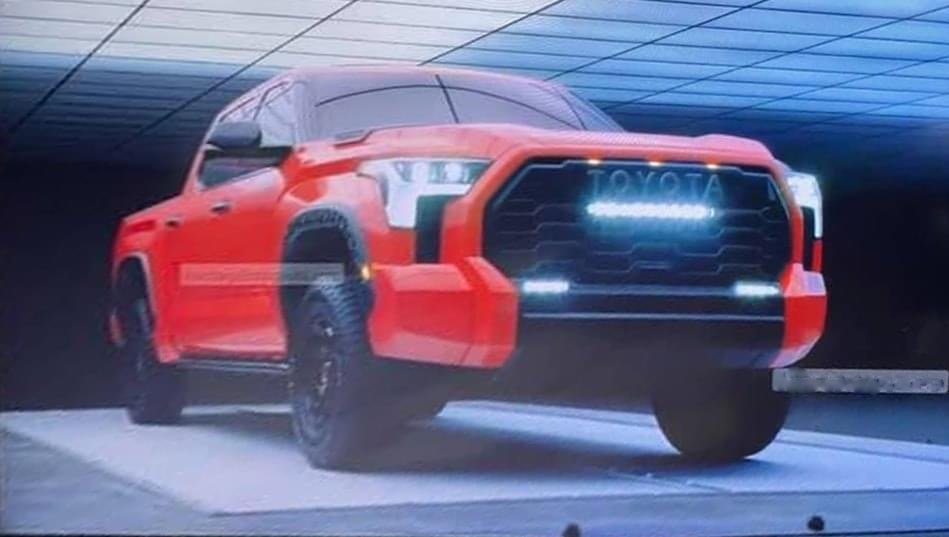 After the initial teaser photo of the front fascia, Toyota has launched a landing page for the 2022 Tundra pickup with no fewer than eight teaser photos. The first of them features the

engine cover and two important details in the guise of orange wiring and six intake runners.

But as you would expect from such a hyped pickup, the Japanese automaker’s long-awaited workhorse has leaked out early. Posted on the

Presented in black and red for the body panels, the 2022 Tundra also features blacked-out window trim, badges on the sides of the hood, mirrors, wheel-arch extensions, wheels, grille, and black garnish on the upper half edge of the TRD Pro-stamped tailgate. Augmented by a strip of LEDs right under the Toyota script in the front grille, the redesigned model further sweetens the deal with Ford Raptor-like marker lights just above the Toyota script.

The outgoing Tundra measures 79.9 inches (202.95 centimeters) in width, so it’s not surprising to see those marker lights integrated there. The wheel-tire combo, however, seems to be a little on the small side of wheels and rubber shoes unless Toyota has lifted the TRD Pro a lot over lesser versions.

At the bottom of the front grille, you’ll further notice Tundra flanked by two more strips of light-emitting diodes as if the signature lighting of the LED headlamps wasn’t enough. Complemented by two intakes right below the headlamps, the front-grille design gives the impression of a very angry carp.

Pictured with the CrewMax cabin layout, rails that appear to be rock sliders, and the 5.5-foot short box, the all-new Tundra in TRD Pro flavor will rival the likes of the Ford F-150 Tremor and Ram 1500 Rebel. But on this occasion, there won’t be a V8 engine option at all according to recent reports.