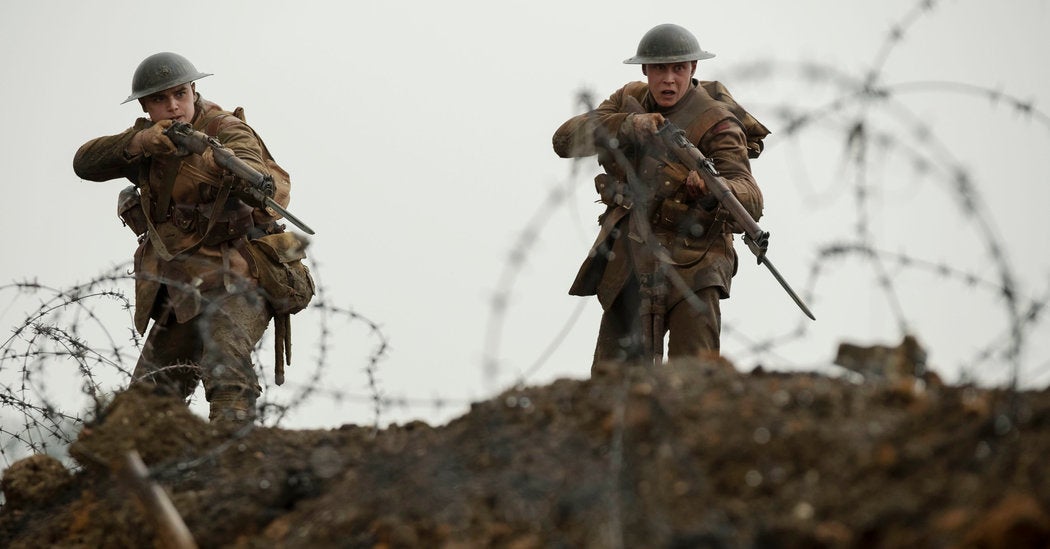 Sam Mendes directs this visually extravagant drama about young British soldiers on a perilous mission in World War I. 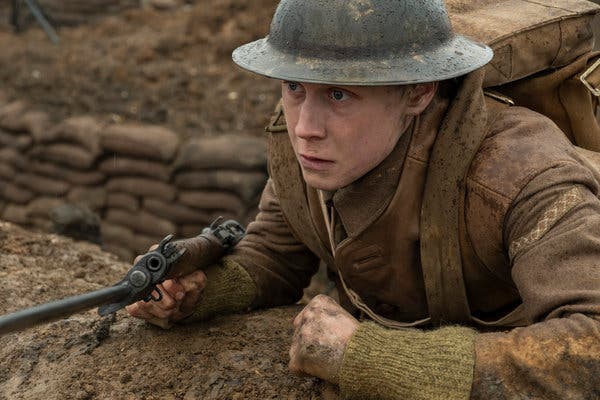 When you purchase a ticket for an independently reviewed film through our site, we earn an affiliate commission.

On June 28, 1914, a young Serbian nationalist assassinated the presumptive heir to the Austro-Hungarian throne, thus starting World War I. That, at any rate, is the familiar way that the origins for this war have been shaped into a story, even if historians agree the genesis of the conflict is far more complicated. None of those complications and next to no history, though, have made it into “1917,” a carefully organized and sanitized war picture from Sam Mendes that turns one of the most catastrophic episodes in modern times into an exercise in preening showmanship.

The story is simple. It opens on April 6, 1917, with Lance Corporal Blake (Dean-Charles Chapman) and Lance Corporal Schofield (George MacKay), British soldiers stationed in France, receiving new orders. They are to deliver a message to troops at the front line who are readying an assault on the Germans, who have retreated. (Coincidentally or not, April 6 is the date that the United States formally entered the war.) The British command, however, believes that the German withdrawal is a trap, an operational Trojan horse. The two messengers need to carry the dispatch ordering the waiting British troops to stand down, thereby saving countless lives.

It’s the usual action-movie setup — a mission, extraordinary odds, ready-made heroes — but with trenches, barbed wire and a largely faceless threat. Blake jumps on the assignment because his brother is among the troops preparing the assault. Schofield takes orders more reluctantly, having already survived the Battle of the Somme, with its million-plus casualties. The modest difference in attitude between the messengers will vanish, presumably because any real criticism — including any skepticism about this or any war — might impede the movie’s embrace of heroic individualism for the greater good, which here largely translates as vague national struggle and sacrifice.

What complicates the movie is that it has been created to look like it was made with a single continuous shot. In service of this illusion, the editing has been obscured, though there are instances — an abrupt transition to black, an eruption of thick dust — where the seams almost show. Throughout, the camera remains fluid, its point of view unfixed. At times, it shows you what Blake and Schofield see, though it sometimes moves like another character. Like a silent yet aggressively restless unit member, it rushes before or alongside or behind the messengers as they snake through the mazy trenches and cross into No Man’s Land, the nightmarish expanse between the fronts.

The idea behind the camerawork seems to be to bring viewers close to the action, so you can share what Blake and Schofield endure each step of the way. Mostly, though, the illusion of seamlessness draws attention away from the messengers, who are only lightly sketched in, and toward Roger Deakins’s cinematography and, by extension, Mendes’s filmmaking. Whether the camera is figuratively breathing down Blake’s and Schofield’s necks or pulling back to show them creeping inside a water-filled crater as big as a swimming pool, you are always keenly aware of the technical hurdles involved in getting the characters from here to there, from this trench to that crater.

In another movie, such demonstrative self-reflexivity might have been deployed to productive effect; here, it registers as grandstanding. It’s too bad and it’s frustrating, because the two leads make appealing company: The round-faced Chapman brings loose, affable charm to his role, while MacKay, a talented actor who’s all sharp angles, primarily delivers reactive intensity. This lack of nuance can be blamed on Mendes, who throughout seems far more interested in the movie’s machinery than in the human costs of war or the attendant subjects — sacrifice, patriotism and so on — that puff into view like little wisps of engine steam.

The absence of history ensures that “1917” remains a palatable war simulation, the kind in which every button on every uniform has been diligently recreated, and no wound, no blown-off limb, is ghastly enough to truly horrify the audience. Here, everything looks authentic but manicured, ordered, sane, sterile. Save for a quick appearance by Andrew Scott, as an officer whose overly bright eyes and jaundiced affect suggest he’s been too long in the trenches, nothing gestures at madness. Worse, the longer this amazing race continues, the more it resembles an obstacle course by way of an Indiana Jones-style adventure, complete with a showstopping plane crash and battlefield sprint.

Mendes, who wrote the script with Krysty Wilson-Cairns, has included a note of dedication to his grandfather, Alfred H. Mendes, who served in World War I. It’s the most personal moment in a movie that, beyond its technical virtues, is intriguing only because of Britain’s current moment. Certainly, the country’s acrimonious withdrawal from the European Union makes a notable contrast with the onscreen camaraderie. And while the budget probably explains why most of the superior officers who pop in briefly are played by name actors — Colin Firth, Mark Strong, Benedict Cumberbatch — their casting also adds distinctly royal filigree to the ostensibly democratic mix.

“Rife with moments of personal glory, where you can almost feel your skills evolving in real time”http://www.gamesradar.com/” GamesRadar+