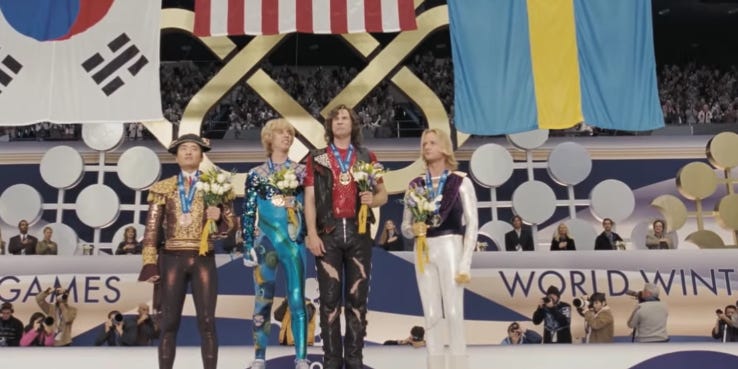 ‘Blades of Glory’ hit theaters 10 years ago today. I was 12 years old at the time, and there was nothing that could get me in a theater faster than a new Will Ferrell movie. To this day, I have never laughed harder in a movie theater than I did on March 30, 2007. I left the theater fully confident that I had seen a comedy classic.

But despite generally favorable reviews and nearly $150 million at the box office, ‘Blades of Glory’ has been all but cast aside in favor of 2007’s shiny new toys: ‘Superbad’ and ‘Knocked Up.’ And while the aforementioned films are both truly hilarious and worthy of the praise they’ve received, they’ve had their time in the sun.

I’ve probably seen ‘Blades of Glory’ 10 or 15 times since it came out. It is truly a delightful movie from beginning to end, and it pains me to know that there are millions — if not billions — of people around the world who haven’t experienced this piece of classic American cinema.

Allow me to walk you through a few clips and make the case for why ‘Blades of Glory’ deserves your time, attention, and most importantly, your respect.

‘Blades of Glory’ is unabashedly ridiculous.

Let’s start with the premise. ‘Blades of Glory’ stars Will Ferrell and Jon Heder as Chazz Michael Michaels and Jimmy MacElroy, two of the best professional male figure skaters in the world. When the rivals get banned from men’s singles forever after fighting on the gold medal stand, the only way to get back on the ice is to team up and skate as the world’s first all-male pair.

From the get-go, this movie is completely committed to its ridiculous premise. Jimmy MacElroy was plucked out of an orphanage and trained Rocky IV-style to be the best skater in the world. Chazz, meanwhile, is an “ice-devouring sex tornado” who learned the craft by skating in Detroit’s frozen underground sewers as a young boy.

Their acts reflect their upbringing, and when the two take the medal-stand at the beginning of the movie, all hell breaks loose.

The supporting cast is stacked, and they leave it all out on the ice.

Let me drop some names:

If you’re reading those names and thinking Huh, if only all those people would get together and make a movie, it would probably be one of the funniest things I’ve ever seen in my entire life, then you’d be right. Because — surprise! — that’s the cast of ‘Blades of Glory.’

Arnett and Poehler, in particular, shine as Stranz and Fairchild Van

Waldenberg, the brother and sister duo who were the best in pairs skating until Jimmy and Chazz team up. Their dynamic with their little sister Katie, played by Jenna Fischer, is gold in each and every scene.

But the real draw here is Will Ferrell. And I’d make the argument that Chazz Michael Michaels is the funniest role Ferrell has ever had.

“But what about ‘Anchorman’?!” I imagine you’re shouting at your computer screen right now. “Or ‘Old School’??! Or ‘Talladega Nights’?!“

Those are all great movies, yes, and the roles are quintessential Ferrell. But note the distinction that I am making: this is Ferrell’s funniest role, not necessarily his best.

Plain and simple, no other character allowed him to let loose the way that Chazz Michael Michaels did. Let’s take a look at a pair of Chazz scenes.

In the first, we see Chazz once he and Jimmy have agreed to join forces and skate as a pair. They are living in a cabin together while they train, and Chazz tells Jimmy the stories behind his tattoos.

In this second clip, we find Chazz — a sex addict, he insists, “with doctors and medicine and everything!” — trying to control his urges while attending a meeting.

What Chazz has that Ferrell’s other characters don’t is that nearly every single one of his lines is a joke.

‘Blades of Glory’ is so committed to being ridiculous that it doesn’t bother with any straight-faced, strictly-for-the-plot dialogue. Ferrell thrives with this freedom, and the result is that every line seems as if it’s been punched up as much as possible, and is delivered in a perfect deadpan.

As much as I love Ricky Bobby and Ron Burgundy, they don’t sustain the level of comedy the same way Chazz does. And for that reason alone, he is Ferrell’s funniest character.

Like a fine wine, ‘Blades of Glory’ has only improved with age.

A full decade after it hit theaters, ‘Blades of Glory’ holds up extremely well. The cast is still recognizable, the jokes land just as well as they did in 2007, and the ridiculous escapism would be right at home in a movie theater today.

Do yourself a favor, and watch ‘Blades of Glory’ with all your family and friends. Better late than never.

This column does not necessarily reflect the opinion of Business Insider.

Our Healthcare Heroes on Vimeo